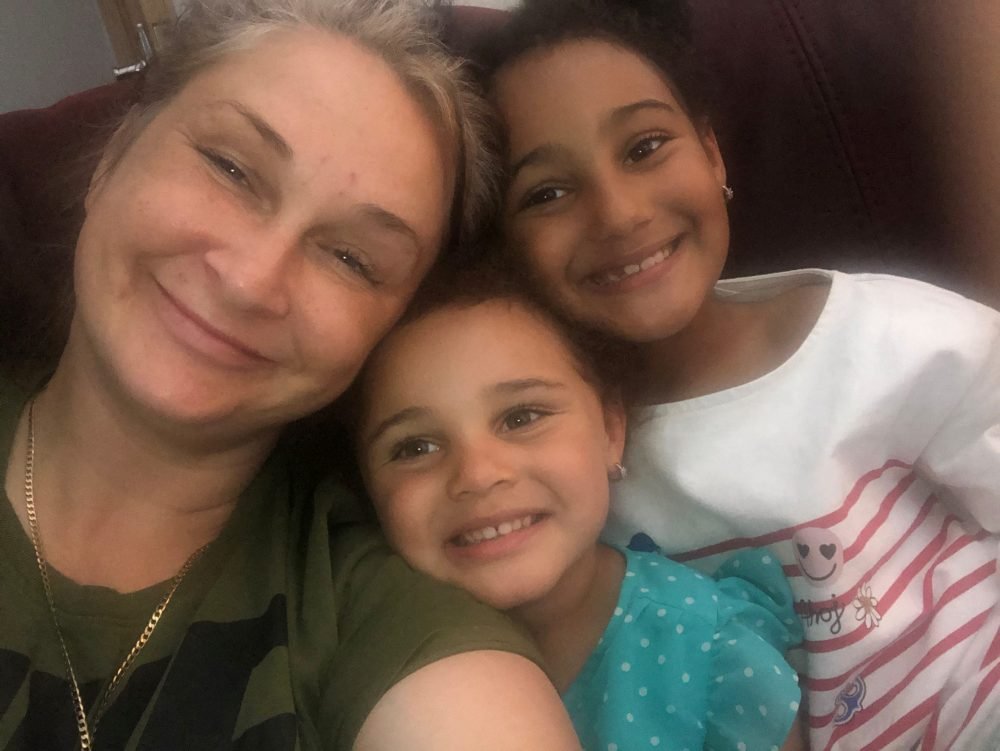 A hero four-year-old saved her mum’s life after she collapsed with a near-fatal brain bleed.

Sonya Jones, from Newton-le-Willows, Warrington, was woken at 4am by a splitting headache and phoned an ambulance before collapsing.

Luckily daughter Sophia, then just four years old, was woken up by the drama and managed to go downstairs and let paramedics so they could rush her mum to Whiston Hospital in nearby Prescot.

Sonya, 46, was told she had suffered a subarachnoid haemorrhage – a life-threatening type of stroke caused by bleeding on the surface of the brain.

The previously-mobile single mum-of-four spent 14 days in the hospital and had to learn how to walk again after the brain bleed in October 2017.

Sonya said: “Sophia heard me when I woke up with the headache and stayed with me the whole time.

“After I got the ambulance on the phone she was at my feet wide-eyed in shock – I can’t imagine how scary it must have been to see her mum go through a stroke.

“I can’t really remember much of the night after that. I could hear banging on the window and everything else I know is from what other people have told me.

“Afterwards my neighbour told me that he’d seen Sophia run and hit the green button that releases the door into the apartment.

“Things could have turned out very differently if she hadn’t.

“Sophia was only four at the time and had to endure seeing me have a stroke, me in the hospital hooked up to different machines and despite all that, she had done so well getting back to normal life.

“Sophia is so unbelievably considerate, not just because of what she did that night but also what she has gone through since.”

After her haemorrhage, Sonya found her memory had got worse and she struggled to take in information as she did before.

Sonya is now speaking out to raise awareness of invisible illnesses to share how people who may not look visibly disabled can be struggling mentally.

She said: “Every time you go to sleep you think it is going to happen again – even now.

“Sometimes people speak to you as if you’ve just had a twisted ankle or something.

“Because I don’t look like I’ve got anything wrong with me they don’t take it seriously.

“People think that because they can’t see it that it doesn’t exist.

“I’m already struggling with the condition itself and it just makes it so much harder when people aren’t mindful of the fact that I can really be suffering.

“It’s especially difficult because I’m quite a proud person I find it difficult to ask for help so when people are dismissive it makes it even more of an uphill battle.”

Sonya said The Brain Charity, a national charity headquartered in Liverpool city centre, was ‘heaven sent’ in helping her move on with her life by providing free counselling.

When Covid-19 turned the UK upside down, Sonya also relied on The Brain Charity’s one-to-one phone service as a vital release from the daily pressures of being a single mother in lockdown.

She and Sophia, now nine, are now supporting the charity’s #Sixmas appeal to raise £6,000 for the 1 in 6 with a neurological condition this December.

Sonya said: “I’ve been home alone with the kids with no one to talk to.

“It’s so good to have someone who treats me like they understand. I needed that.

“The Brain Charity is heaven sent – I would be lost without it.

“I just hope people put some time aside to research what The Brain Charity does for people and how much they help so they can understand what a difference they make.

“They’ve helped me in many different ways with money, emotional support and evening make sure I had food through the first Covid lockdown.

“The Brain Charity helps people to understand that my conditions aren’t trivial and I think everyone should have access to that. We need The Brain Charity and I hope that they get the money they need to help many more people like me”

This year, The Brain Charity has faced a 70% surge in referrals due to Covid-19, despite many fundraising events being cancelled.

The organisation is asking people from all over the UK to organise and participate in a sponsored virtual or covid-safe activity event themed around the number six, to highlight the fact one in six people has a neurological condition, or sign up to donate £6 a month.

Tui Benjamin, head of communications and fundraising at The Brain Charity, said:

“There are more than 600 different neurological conditions in existence, including stroke, brain injury, dementia and many much rarer ones too.

“We are the only charity in the UK to be here for every single one of them, as we have been for the last 26 years.

“2020 has been an unprecedented year for everyone; as a charity we’ve been unable to fundraise as in normal years, but at the same time, demand for our services has rocketed like never before.

“One in six people have a neurological condition, and more than ever need the life-changing support we provide.

“That’s why, this December, we are calling on anyone affected by a neurological condition in some way – most people will know someone living with one – to support our #Sixmas appeal.”

Supporters and fundraisers can shout about their donation or fundraising on social media using the hashtags #Sixmas, #ShareWithSix and #SupportingThe1in6 before nominating six friends to do the same.