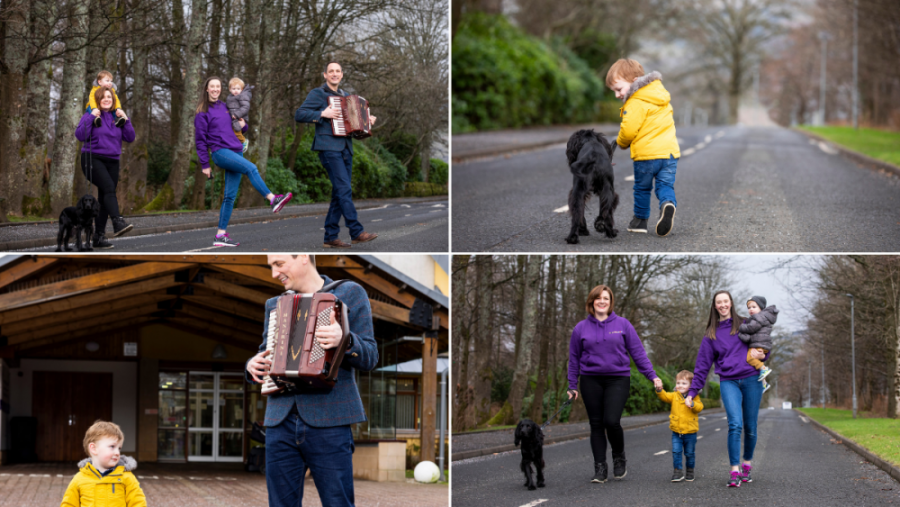 AWARD-winning accordion player Gary Innes hopes to strike a tune and kickstart a quick step with Veterans, supporters, and their families as he launches this year’s March for Erskine: Virtual Walk.

Scotland’s largest Veterans’ charity is urging supporters to dig out their trainers and boots and get sponsored to charity walk throughout the month of March. The money raised will help transform the lives of the nearly 1,000 ex-servicemen, women and their families in Erskine’s care.

Supporters of all ages can set their own goals or join with family and friends to raise money collectively, all in the name of Erskine. Remember no march is too short or too long!

The month of fundraising will then culminate in the grand finale, March for Erskine: Live on Saturday 26th March. The route of the 3k event will take place through the heart of the Erskine Veterans Village in Bishopton. The local community is encouraged to join in celebrating the fundraising month with a family-fun day, which will include, along with other fun things, a Treasure Hunt for children as well as food stalls and entertainment.

The multi-talented Gary, 41, stepped out to launch the event at The Erskine Home in Bishopton – with a little help from families, friends and staff members Krystyna Caulfield (40), Angus Caulfield (27 months), Erin Ewing (33), Remi Ewing (18 months) and spaniel Cooper.

Gary is also one of the founding members of the award-winning Scottish super-group Mànran, which has seen him perform to worldwide acclaim. His association with Erskine dates to 2015 when he created Scotland’s first collaborative charity folk single with a piece of music he composed called ‘Our Heroes’. He was subsequently appointed as an Erskine ambassador in 2021.

“It has been a difficult couple of years for everybody but as an ounce of normality is seemingly beginning to be restored, it is fantastic to get onto the grounds of Erskine and launch this fantastic initiative. It is great to be joined by some of the staff, families and four-legged friends participating in this year’s March for Erskine, and I am honoured to be able to March alongside them. I will even be taking my accordion out for a walk throughout the month and playing some music along the way – there are no rules, just get your steps in and get fundraising for this amazing charity.”

“By taking part in our March for Erskine events, our supporters will be helping to provide the high standard of care our Veterans so richly deserve. March for Erskine is the perfect opportunity to get outdoors, ‘fall-in’ behind and support our nation’s Veterans through fitness and fun. We are delighted to once again roll out this fantastic event.”

To sign up for the Live Event, visit: https://register.enthuse.com/ps/event/MarchforErskineLiveEvent

And to sign up for the Virtual Event, visit: https://register.enthuse.com/ps/event/MarchforErskineVirtualEvent

Fundraisers are encouraged to set themselves a target of £100 per person/group. Each sign-up will receive an Erskine T-shirt and their own participation medal to recognise their efforts.

You can support Erskine here: https://www.erskine.org.uk/support-our-work/donate/.