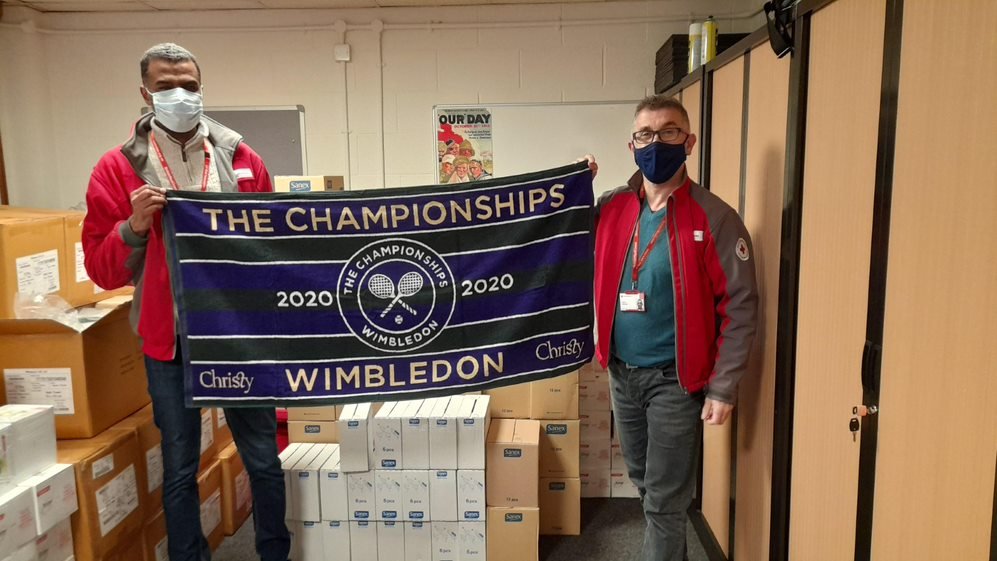 The Wimbledon Foundation, the charitable arm of The All England Lawn Tennis and Croquet Club (AELTC) and The Championships, is pleased to announce it has committed a total of £300k to the British Red Cross as it extends its response to the COVID-19 pandemic.

As part of the AELTC’s thank you to those who have played a key role in helping the people most affected by the pandemic during the past year, Mike Adamson, Chief Executive of the British Red Cross, has been invited to the Royal Box today as a guest of AELTC Chairman Ian Hewitt, while British Red Cross staff and volunteers have been given Centre Court tickets for the day.

At the beginning of 2020, the Wimbledon Foundation made an initial donation of £100k to the British Red Cross, the UK’s leading emergency response charity, to provide support for those affected by emergencies, both internationally and in the UK. The outbreak of COVID-19 saw this donation shared between their Disaster Fund, which provides rapid relief to those affected by emergencies, and their Hardship Fund, created in response to the pandemic to provide support to those who are financially vulnerable.

With the pandemic ongoing, the Wimbledon Foundation today announced a donation of £100k to the British Red Cross Global Coronavirus Appeal and a further donation of £100k to their Disaster Fund, which during the past year has provided support to those affected by the devastating explosion in Beirut and to those whose homes and livelihoods were destroyed by severe flooding in Sudan and by Hurricane Eta in Central America.

Around the world, Red Cross teams are helping to provide oxygen, ambulance services, first aid and PPE, as well as supporting the vaccination programmes in countries including India and Bangladesh. In the UK, their network of staff and volunteers have been supporting vulnerable people at home with delivering vital supplies and conducting welfare checks; and helping get people home from hospital to relieve the pressure on the NHS.

“We are thrilled to be continuing our partnership with the Wimbledon Foundation for a second year. Their commitment to supporting us comes at a time when our humanitarian work both in the UK and around the world is more vital than ever.

“Working alongside the Foundation will enable us to continue to respond to COVID-19, as it affects lives and communities here and around the world. And, through our Disaster Fund, we can ensure vulnerable people are receiving the urgent relief and support they need when crises hit.

“Nobody can predict where the next disaster will strike. But with the support of partners like the Wimbledon Foundation, the Red Cross can make a difference to thousands of communities around the globe, and I am delighted that we will continue to work together.”

“As the charity of an international sporting event, it is important to us that we are supporting people not just in our own local communities but also internationally, particularly in times of crisis. We are proud to be continuing our support for the British Red Cross, who, through their network of staff and volunteers, have been working tirelessly to support individuals and communities whose lives and livelihoods have been severely impacted by COVID-19 and emergencies around the world.”

In addition to financial support from the Wimbledon Foundation, 2020 Championships towels were donated to the British Red Cross and used at their refugee projects.