Why traditional means of clothes and food donations, aren’t necessarily the best way to support refugees

Paul Hutchings writes, Paul is the co-Founder and CEO of Refugee Support Europe.

Anyone who knows Refugee Support Europe knows that we’re all about Aid With Dignity. It’s a key message that appears everywhere, but it’s much more than just a strapline or slogan. It defines everything we do.

Refugee Support Europe was launched in April 2016 in response to the Syrian refugee crisis which saw thousands stuck in camps in Greece. For the first couple of years, we worked in refugee camps in Northern Greece alongside other agencies including international NGOs. To be honest, we were new to it so initially thought it was about getting as much stuff as possible to people in as fair a way as possible.

But the more we engaged with the Syrian, Kurdish, Iraqi and other refugees living on the camps, the more we realised something that you may think was blindingly obvious: of all the hardships of being a refugee, the one that stood out most starkly was that being a refugee strips you of all human dignity.

Imagine one day you’re a successful doctor, or university lecturer, or small business owner, working hard to support your family, and the next you’re crammed into a leaky UNHCR tent and living on hand-outs. We could see it in the faces of the men and women.

We knew we couldn’t change their circumstances living in the camps, but we realised there was one thing we could change: how they were treated. We wanted them to be treated in a far more dignified way – and that’s how our Aid With Dignity approach was born. 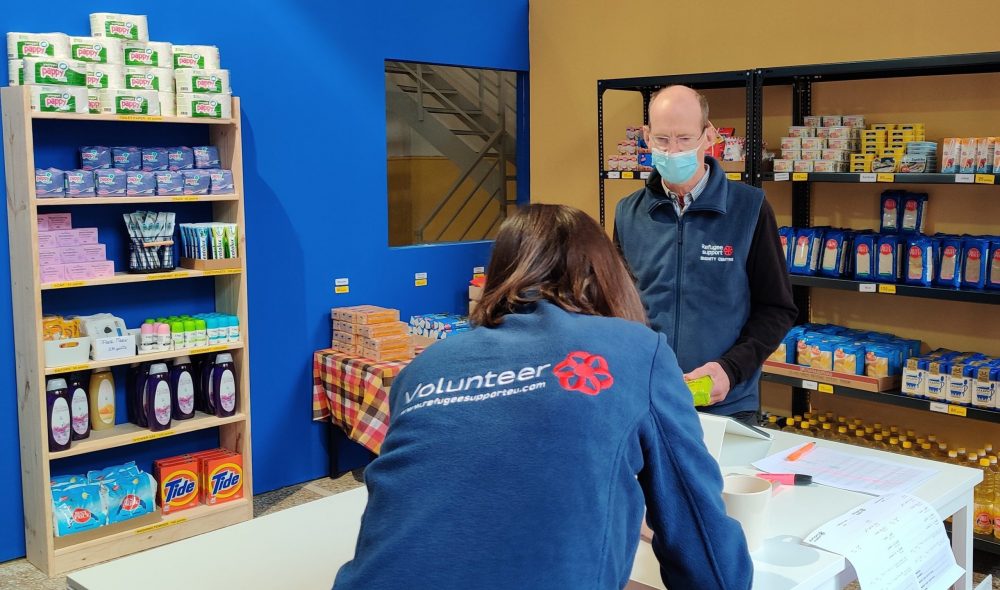 In no time at all, Aid With Dignity morphed from slogan to mantra. It became a benchmark we had to live up to and led us to come up with more creative and inspired ways in how we went about our day-to-day business.

For example, before Aid With Dignity, we offered people bags of food that we decided they should have. After Aid With Dignity, we set up what we call ‘food shops’ on the camps where the refugees could come in and choose what they wanted from what was available. We designed a “money” system where all of the food and toiletry items were individually “priced” with points and each family was given a number of points to spend.

Now they were no longer being given hand-outs but were visiting a shop where they were treated like valued customers and were able to exercise choice.

As a result, we have to ‘train’ our volunteers to be service orientated. This wasn’t a problem as once they had learnt the practicalities of operating the points system they were more than happy to buy into the added Aid With Dignity approach.

When we relocated from Greece to Cyprus, we established ‘The Dignity Centre’, which offers refugees a safe and supportive space in which to meet and come together. Our volunteers have run education programmes like Greek and English language training and computer skills. We’ve set up a bike repair business, barbers and a sewing co-operative which earns them a little extra cash. We write CVs to help them get jobs.

In Cyprus, we need to focus our efforts once more on food security. In the UK, the government has created an even more hostile environment so refugees are in greater need of care, compassion and dignity than ever.

On top of that, we’re faced with another humanitarian crisis, and the UK has pledged to welcome thousands of families from Afghanistan. Hundreds of communities and grassroots organisations in the UK have sprung up in response.

The internet and the TV news are full of images of donated clothes being stockpiled and other welcoming initiatives taking shape.

This is heartening to see, but if I could share one thought with all those who are embarking on their first experience of refugee support work, it would be this: what you do and what you provide will be very important in helping refugees arriving in the UK, but just as important and valuable will be how you do it.

The more you can place dignity at the heart of what you do, the more appreciated your efforts will be.