On the evening of Wednesday 23 June, during Children’s Hospice Week, Shooting Star Children’s Hospices Executive Vice-President Karen Sugarman MBE was joined by close friends and fellow Vice-President Simon Cowell and Patron Lauren Silverman for a special Sunset Walk to raise money to support babies, children and young people with life-limiting conditions, and their families across London and Surrey.

2021 marks a very special year for Karen, as her 35th year working in the charity sector, with 18 years of that time working for Shooting Star Children’s Hospices.

Her dedication to fundraising for cancer and palliative care has been recognised in the Queen’s birthday honours list, with Karen awarded an MBE for her services.

To celebrate this momentous milestone, Karen has decided to take on various fundraising challenges throughout the year to raise as much as she can for a cause very close to her heart.

“Due to personal circumstances, as a family, we were introduced to palliative care at a young age, and my ambition was to work in the charity sector. I have been privileged over the last 35 years to meet so many incredibly brave families and work with the best colleagues, volunteers and supporters.” 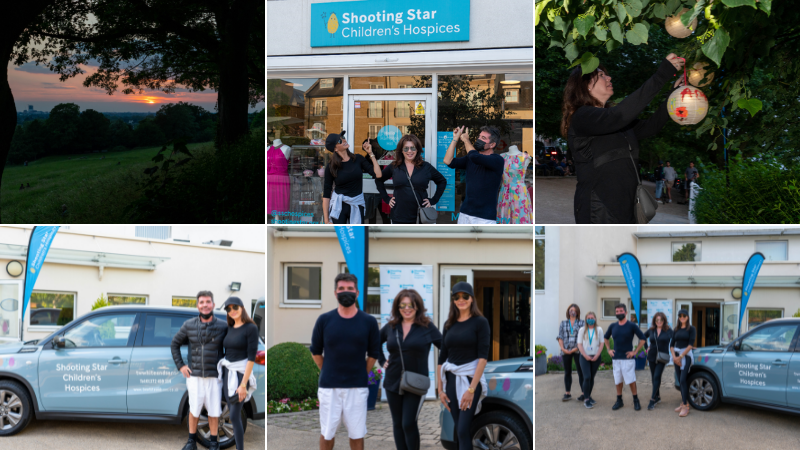 “The studios are a special place on the route, where 35 years ago, I met with the late George Michael, who was the first person to help me with my charity work.”

The walk continued through to Richmond, ending at Richmond Hill. Here, Simon, Lauren and Karen hung lit lanterns decorated by children supported by Shooting Star Children’s Hospices, in a tree, in memory of loved ones and the many babies, children and young people who have tragically lost their lives. As the sun set, Karen, Simon and Lauren, joined by Karen’s brother Adam, took the time to quietly reflect on the special charity that remains close to their hearts.

“Simon and Lauren have worked tirelessly for the charity, along with their fellow Vice-Presidents and Patrons. With regular visits to our hospices, hosting a special Afternoon Tea in London for families and having Shooting Star Children’s Hospices as an official charity beneficiary of the X-Factor, they continue to make a lasting difference to the charity.

“It was a privilege to walk alongside my friends Simon and Lauren. The walk had a special poignancy for me, beginning at our Hampton hospice and ending in Richmond, where I started as a volunteer in palliative and cancer care. I feel so honoured in continuing to support families in the most unimaginable circumstances now and long into the future.”

Karen, Simon and Lauren have raised over £50,000 and are encouraging supporters to sponsor them via her JustGiving page.

You can find out more about Shooting Star Children’s Hospices by visiting: www.shootingstar.co.uk.