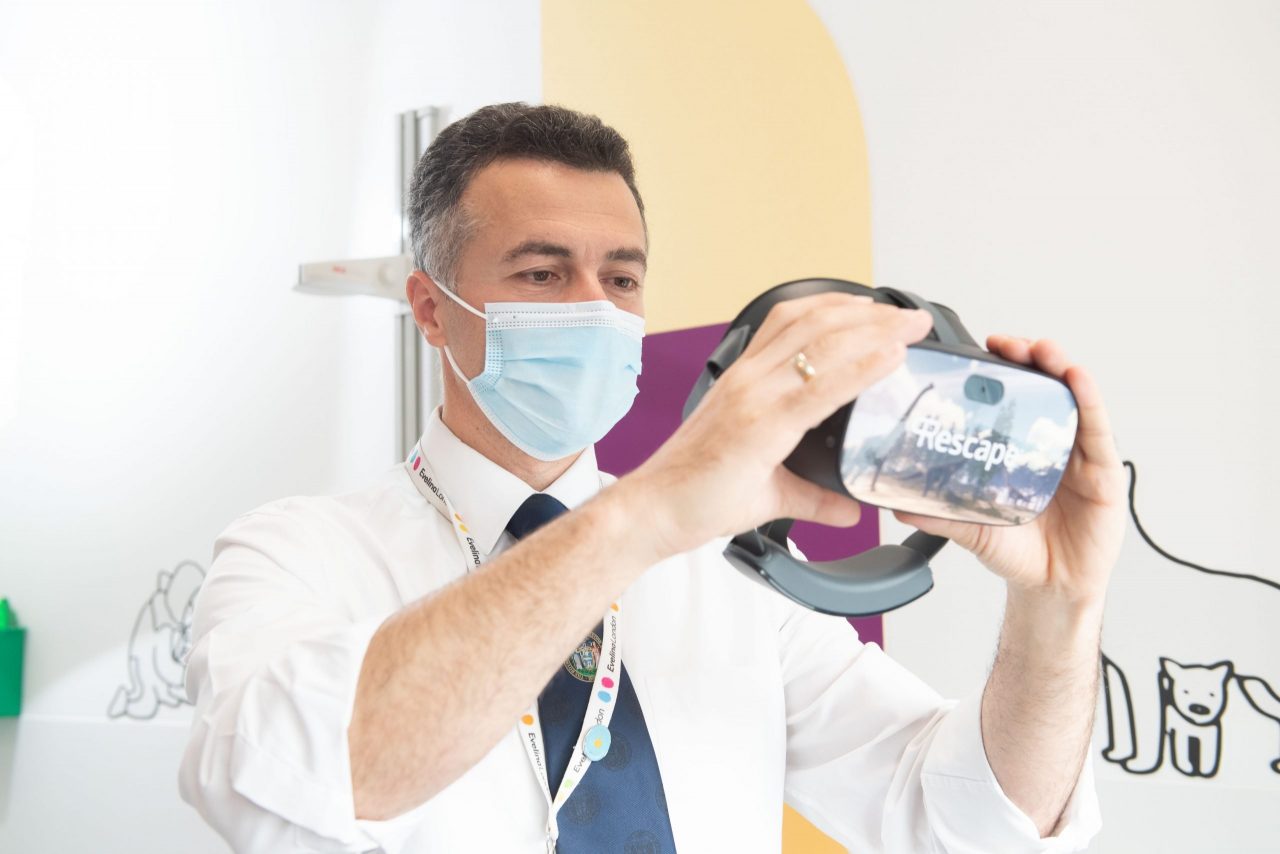 Evelina London has purchased two Rescape VR headsets which are designed to distract the wearer while they’re undergoing procedures which might make them anxious and cause them stress. Children using the headsets can experience different 360-degree environments, where they can swim underwater with tropical fish, visit outer space or even walk with dinosaurs. They can also play a series of interactive games.

The VR headsets were purchased using some of the money raised by Tony Hudgell. Tony, then six years old, raised more than £1.5m for Evelina London Children’s Charity by walking more than 10 kilometres on his prosthetic legs in June 2020.

Research by the expert orthopaedic team has already shown that children using the VR headsets experienced less anxiety which in turn helps to improve their hospital experience.

“The feedback from our patients who’ve used the headsets has been incredible.

“In 2020 we borrowed some headsets and did a feasibility study where children used the VR headsets as a distraction method. The children were coming into hospital either for a blood test or having a plaster-cast put on or removed for a broken bone. The results of the study showed that 66% experienced less anxiety and every child said they would like to use the headsets again.

“Some of the children who normally experience anxiety while getting a blood test said they didn’t even notice the needle going in while using the headset.”

Since purchasing the headsets last year, more work has been undertaken to assess the effectiveness of reducing the anxiety of children in different settings.

“We have used the headsets with patients before they have a surgical procedure at Evelina London and while waiting to see the consultant in the paediatric fracture clinic. The research has shown a statistically significant reduction of hospital anxiety and pain in the children who use the headsets. It has also shown that parents feel more relaxed knowing that their children are more comfortable and less anxious.”

Evelina London’s play specialists now use the headsets every day with patients in the orthopaedic department, with plans to use them throughout other areas of the hospital.

“The potential with these headsets is huge. As well as a distraction method, we hope to be able to use them in the future to show patients who will be having an operation what to expect. They’ll be able to wear the headsets and watch a 360-degree video of all of the things they’re likely to experience before their surgery, which will help them to be more prepared and less anxious before their procedure.”

Ellie Jackson, 11, used a VR headset during an appointment before having an operation on her hip. Her mum Helen, from Orpington in South-East London, said:

“Ellie hates needles and is really terrified of getting a blood test. She can get really anxious and upset and it can take a really long time to calm her.”

Before Ellie had a blood test, she was asked if she wanted to have a go on the VR headset. Helen said:

“As soon as she put it on, she was completely distracted. The nurse had to put a cannula in her hand and she didn’t even notice it going in. The difference it made was amazing.

“It made the whole experience so much easier. Not only did it help to calm Ellie, but it meant I was less worried about her as well.”