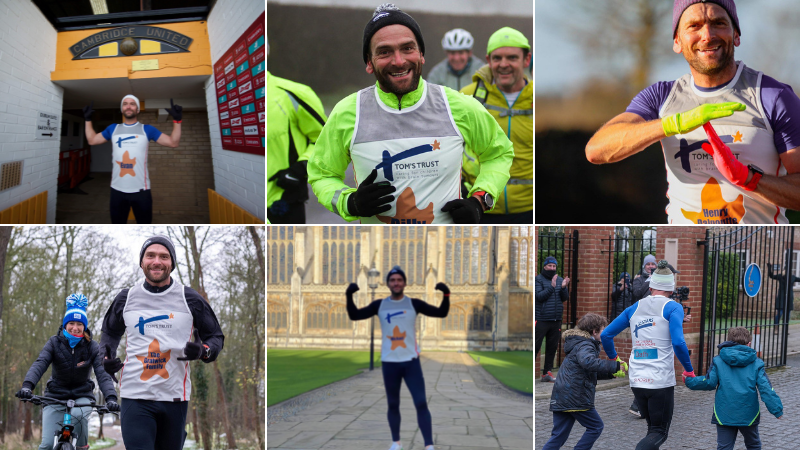 A charity campaign led by a Guinness World Record holder has raised a staggering £225,000 to help care for hundreds of children with brain tumours.

Ben Blowes, a renowned runner who once completed the London Marathon with a tumble dryer on his back, ran 31 marathons in 31 days in December 2020 as part of Tom’s Trust’s 31 Stars campaign.

Each day Ben ran for a different child who Tom’s Trust supports, with the charity sharing that child’s story on their social media channels each day.

The fundraising element of the campaign has now come to a close, with a final total of £225,000 being raised. The donations will go towards the vital provision of psychological and mental health care for children with brain tumours.

With an original target of £31,000, the campaign can provide support for 225 children with brain tumours and up to 675 family members for the next year – more than seven times the number of families it was set out to help.

“I am so proud to support Tom’s Trust’s children and thrilled to see how much has been raised.

“After meeting Debs a few years ago and hearing her talk about her son Tom and the changes that she wanted to make in his name, I knew that I had to do something to help. Every painful step I took in December will help to support a child and their family, and as a father myself, it was important to me to try to help as best I could.

“It was a daunting challenge, which I wouldn’t have been able to attempt without the support of my family and the fantastic team behind the campaign.”

At the end of an unprecedented year in which mental health and exercise have become key issues during the lockdown, Ben’s extraordinary challenge took him through iconic routes around Cambridge, Suffolk and Milton Keynes.

As a Pride of Britain nominee and Guinness World Record holder, Ben has faced many running and fitness challenges in his time, including reaching the semi-final of Special Forces: Ultimate Hell Week season 2, but none required as much grit, stamina and endurance as 31 marathons in 31 consecutive days.

Despite becoming injured early on in the challenge and completing one race on crutches, Ben powered through to run the rest, all while continuing to do his full-time job outside of the challenge. He crossed the finish line in Newmarket with his two sons Spencer and Joel.

A biotech company kindly donated the final £25,000 to the cause, while 11-year-old Freddie Mann from Gosforth, Newcastle, raised more than £5,000 by running 4km every day of the challenge.

Cambridgeshire charity, Tom’s Trust, has pioneered a psychological care and support program for children with brain tumours in hospitals within the UK and has the vision to implement this within every UK hospital that treats children for brain tumours.

“It was wonderful to be able to champion the children that we support and really allow people to understand what real-life heroes these families are through their stories.

“It was a very emotional campaign but one that was about so much positive change, it was an honour to be a part of it, and we’re thrilled that so much money has been raised to help so many children.”

Brain tumours account for one out of four childhood cancers and are the second most common type of cancer in children.

They strike young people when they are most vulnerable so that many recover with educational, mental health and physical challenges that can hold back their development for years without the right psychological care.

Tom’s Trust was founded by Debs and Andrew Whiteley following the death of their son Tom in November 2010, after an eight-month battle with a brain tumour.

If you wish to support Tom’s Trust or take part in your own fundraising challenge, please visit: www.tomstrust.org.uk.

Tom’s Trust’s latest fundraising campaign, Tea for Tom, is set to raise more than £10,000 for children with brain tumours. If you’d like to host a tea party, please visit: www.tomstrust.org.uk/tea-for-tom.