Tom’s Trust: The accomplishments of a small charity over a decade

This June, Tom’s Trust will proudly mark 10 years of funding vital psychological care to children with brain tumours and their families. From the triumphant moment when we funded our very first psychologist at Addenbrooke’s Hospital in Cambridge to now helping to fund enough psychologists in hospitals to help more than 300 patients and nearly 1,000 family members, it’s overwhelming to see how far we’ve come.

We are now sowing the seeds to open our third centre soon, with the target to grow a fourth and a fifth in the next five years. We are also moving into the research sphere as we begin funding our first drug trial at the end of 2021, led by the Great North Children’s Hospital in Newcastle. The trial aims to improve thinking skills that suffer after a child’s medical treatment.

If you haven’t heard much about Tom’s Trust before, now’s the perfect time to get involved as we expand our charity. Tom’s Trust was officially founded on 27th June 2011 – a date significant to me as it would have been my son Tom’s 10th birthday. He sadly died from an aggressive brain tumour in November 2010, just eight months after he was diagnosed, and his dad Andrew and I vowed we would help as many families in future as we could, so they would never have to walk this path alone.

At the time, we felt like we received almost no mental health support. Nobody told us how to deal with the news that Tom was going to die. Nobody told us how to explain it to our other children; we relied on family and friends for support and fumbled our way through the whole nightmare. When Tom died, we all held his beautiful little hands as we said goodbye.

So many families in the UK are going through this trauma right now. They need help with their mental health. They need coping mechanisms, a shoulder to cry on and people who understand. They need Tom’s Trust.

That’s why we fund psychological support to hundreds of families across the UK. We aim to be able to support every family. There are 400 to 500 children diagnosed with a brain tumour every year – that’s at least one every single day. And that’s why we started Tom’s Trust, so each young child facing a brain tumour and the rest of their family can feel they have someone to talk to through diagnosis, rehabilitation, or bereavement.

So how far have we come? Here’s a timeline of our biggest moments over the past ten years. If you’re thinking of setting up your own small charity, or you’ve just started out, I hope it gives you insight and confidence about how you can change the world for the better in just ten years.

November – We lost our darling Tom.

December – We travelled to Egypt on Boxing Day for the first time without Tom; we took his passport with us.  On our first holiday without Tom, an idea was born. I realised on that holiday that I needed to change the amount of psychological support offered to families.

June – Tom’s Trust became a registered charity! Addenbrooke’s Hospital in Cambridge told us that we needed to raise £215,000 to employ one clinical psychologist for three years. So, we began our fundraising! The community came together, and in the first year, we raised just over £100,000. Then there was the first-ever Tom’s Trust fun run, fashion shows, bridge afternoons and cake baking. Friends and family came together to support our dream of making change. Tom’s classmates cycled around the Wimpole Estate in the pouring rain in November to mark a year after Tom’s death and raised £1,700

February – The official launch event of Tom’s Trust at Corpus Christi College at the University of Cambridge. We threw a black-tie dinner for 170.

July – We were invited to 10 Downing Street for the first time for a Conservative networking event.

September – Our first clinical psychologist took up her post as part of the Brainbow neuro-rehabilitation service in Cambridge. We also hired our first employee, Kirsty Keegan, who started as an official fundraiser. 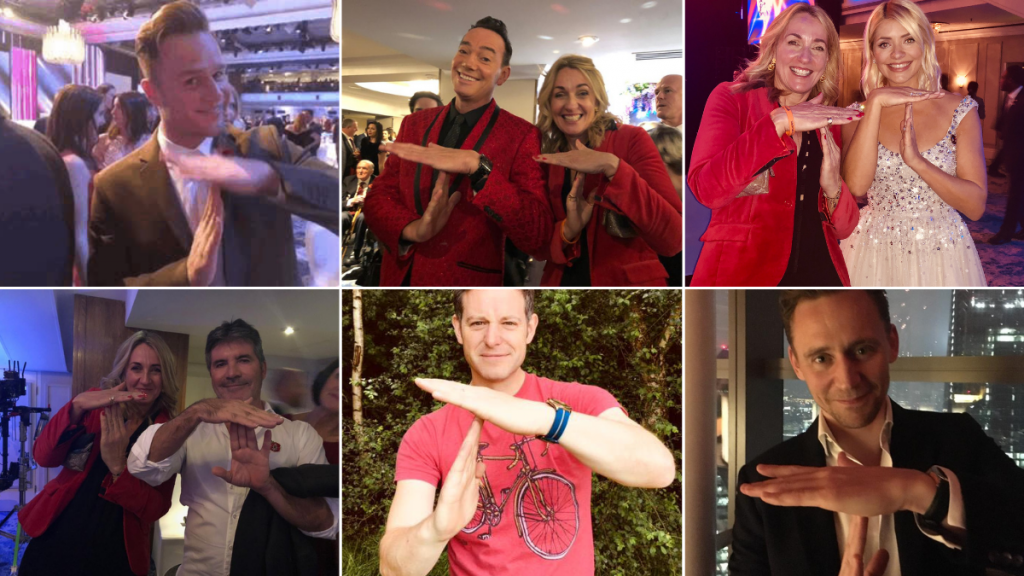 January – Tom Hiddleston did a TforTom photograph (making a T shape with his hands for us to share on social media). We also celebrated three years of working with Cambridge University Hospitals NHS Trust and moved to our first very own office in Cherry Hinton, Cambridge!

October – Debs won the East Anglia Pride of Britain Award and got to go to the live show.

November – Team Tom joined all the Global Radio stations in London to MAKESOMENOISE about Tom’s Trust’s work as one of Global’s nominated charities.

April – We received our biggest donation to date – £100,000 from The Global Make Some Noise Campaign, given as a surprise at Heart FM in Cambridge. There were lots of tears!

September – We launched our second centre at the Great North Children’s Hospital in Newcastle, helping children with brain tumours across the North East.

September – Rebecca Wood, with her wealth of knowledge from Alzheimer’s Research UK, took over as CEO to allow Debs to focus more on fundraising and a new Ambassador scheme. A new strategy began to be formed on how to help a lot more children and families faster.

December – Despite the coronavirus pandemic throwing a spanner in the works with our fundraising work, Guinness World Record holder Ben Blowes ran to glory, completing 31 marathons in 31 days. He raised a staggering £225,000 for Tom’s Trust.

Our tenth year – let the celebrations begin! We now have six team members as well as our wonderful volunteers. Lucy Hodgkin, our Digital Campaigns Officer, came on board with us as a volunteer but is now a permanent employee. We’re really seeing the results of the expertise we have within the team.

This year we are asking supporters to host a Tea for Tom party in June to mark our tenth anniversary on what would have been Tom’s 20th birthday. To get involved and receive your free party pack, please visit: www.tomstrust.org.uk/tea-for-tom.