The underwater wonders of the UK’s seas, a story in photographs 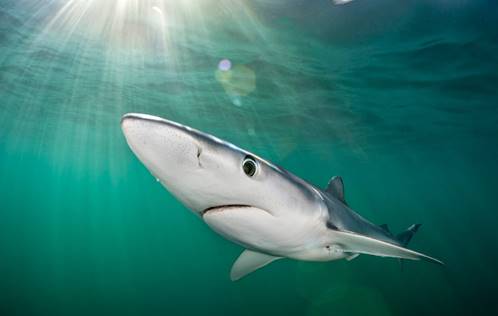 FROM the Jurassic Coast of Dorset to the northernmost waters of Scotland, there is a huge array of incredible landscapes and animals beneath the water’s surface in the UK. The Marine Conservation Society has gathered together some of the amazing ocean imagery capturing the wonders of the UK seas by talented photographers and divers around the country.

Read the photographers’ stories behind the captivating images, enjoy some unexpected sightings and get inspired to head to the UK’s coasts and seas as lockdown eases, and summer draws closer.

The Marine Conservation Society’s sightings programme asks beachgoers to report animals, including jellyfish, turtles and basking sharks, when they spot them in UK waters. Divers can join Seasearch, a volunteer diving programme that monitors underwater life, with the opportunity to hone underwater photography skills.

Creatures of the deep 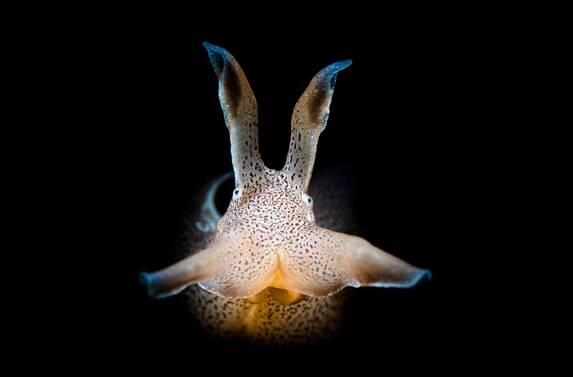 The story: Sea hares look brown and sluggish at first glance, but if you look closely, they have delicate patterns and colours. I used a snooted spotlight effect to show this off and highlight the head tentacles, which resemble a hare’s ears, giving this animal its common name. 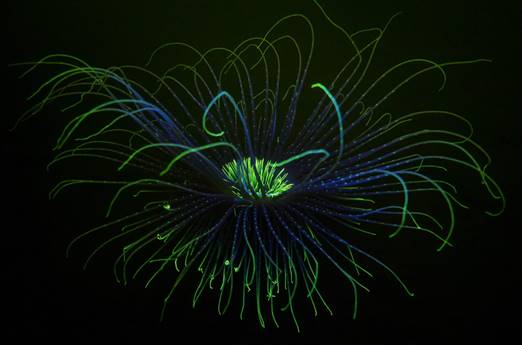 The story: Over recent years, underwater fluorescence photography has become a passion of mine, particularly in British waters. I never know quite what I’m going to find that will fluoresce under the blue (near UV) light. After spending the day diving at the Garvellachs, my buddy and I decided to stop off for an evening dive in Loch Fyne. The site we decided on was at Inveraray slip which is fantastic for fireworks anemones. This particularly large individual was a favourite of mine from this dive as I was able to capture the whole anemone with its long tentacles stretched out within frame. 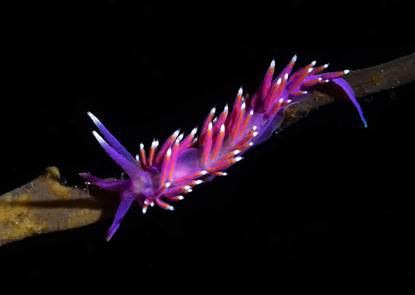 The story: The colours of this nudibranch make it not only one of our most flamboyant but also easiest to spot! In a dark area under the pier, this individual was making its way along a stalk of kelp. A flash of pink and purple in my torch light caught my eye, and so I had the pleasure of observing it for several minutes before I moved on. 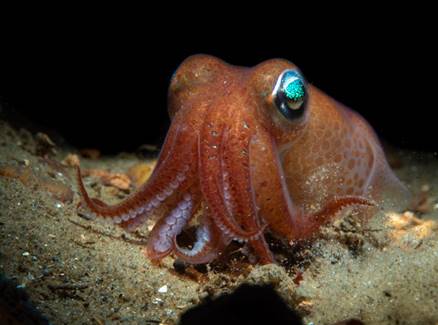 The story:  I was solo diving at a site called A-Frames – which gets its name from the huge sunken concrete blocks which once formed a large pier. They’re a great anchor point for marine life, so there’s usually something interesting going on. It’s only an hour’s drive from Glasgow, so I dive there regularly. Within minutes of entering the water, I found my first one, then my second…and my third. They were everywhere! They’re quite comfortable around divers, however, they will burrow in the sand when they’ve had enough, and that’s exactly what this one was starting to do when I snapped this shot. 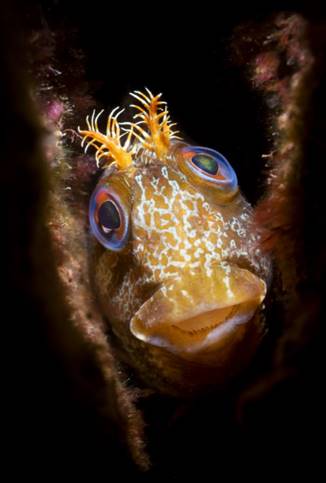 The story: This tompot blenny is presenting a smiley face to the camera, but he’s actually carefully guarding a stash of eggs in the crack behind him. Male tompots can be quite feisty in guarding their territory, which they keep clean and tidy, ready for several females to lay eggs in if they’re lucky. They will fertilise the eggs and guard them for around a month in the early Summer.

Forests of the sea 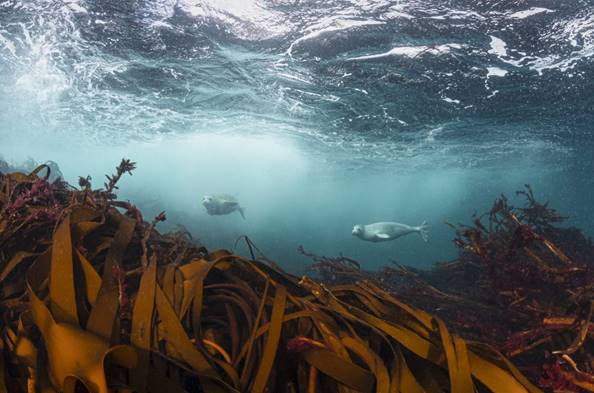 The story: The Grey seals on the North coast of Scotland are not as accustomed to divers as in some UK locations, but it was fun to watch them enjoying themselves at a distance.  They were far more comfortable in the surging waves than I was, as I clung on to kelp to capture this photo. 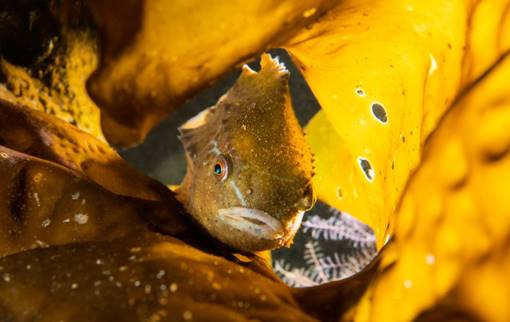 The story: This young lumpsucker was about the size of a tennis ball and was living attached to the blades of sugar kelp. My buddy Kirsty Andrews found this one, and I photographed it with one of my flashes backlighting the kelp to reveal its golden colour. As always with great finds, it was at the end of a long and chilly November dive, so I only had time for a few pictures before I had to bid it goodbye. I like the feather star arms peeking into the background of this image, which are so characteristic of this area in the far north-west of Scotland. 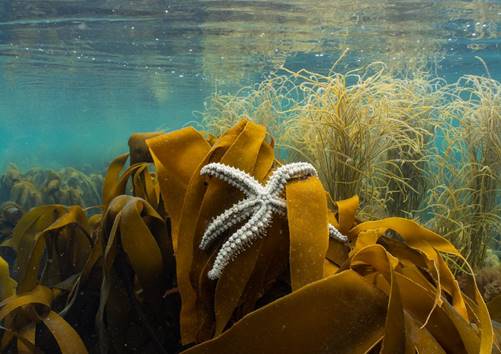 The story: This starfish slowly walking up to the top of the kelp canopy was seeking a good vantage point from where it could release its spawn. A chemical sent out by females with their eggs prompts neighbouring starfish to join the party. 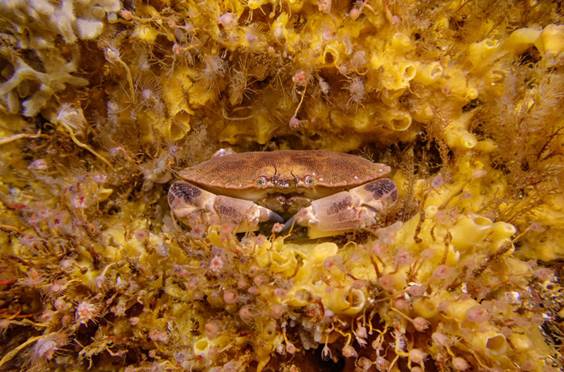 The story: Situated at the narrow entrance to Loch Etive, near Oban, the Falls of Lora has a reputation of being a bit of a scary dive. Given that the tide races through creating upwells, whirlpools, and standing waves, it’s easy to understand why. But done at the right time, it is an excellent site and easily a favourite shore dive of mine. There is such amazing underwater topography and proliferation of life at this site, there was plenty to admire and photograph. While swimming along, one of the gullies, this crab caught my eye as it seemed to be comfortably nestled into the yellow breadcrumb sponge and hydroids surrounding it. 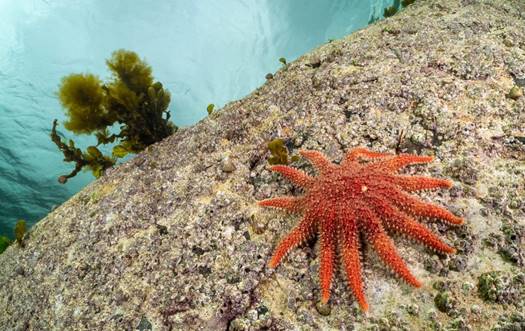 The story: I spotted this large Common sun star at the end of a dive in the Loch. It was quite hard to miss, actually! It was on the vertical face of the slip-way I use to enter and exit the water. More often found on the seabed or on reefs, this one spent a few hours snuffling around on the pier until at the end of my third dive of the day, it had totally disappeared…quite a hard trick for such a large and brightly coloured animal! 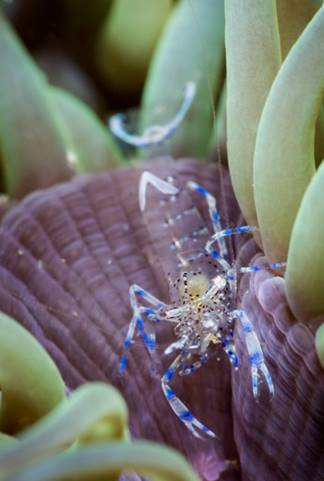 The story: The shrimp is a warm-water species ranging from the Mediterranean to the Azores and, prior to 2007, was found only as far north as the Channel Islands. Since then, the shrimp has become well-established along the Dorset coast. It’s a favourite among local Seasearch divers and underwater photographers alike and always a joy to find underwater.

Despite its extravagant colour, the shrimp can often be very hard to spot. It lives protected among the stinging tentacles of the snakelocks anemone, which also frequents warmer waters. When not lit with a torch or a flash, these tiny shrimp can be quite transparent. Breeding females can often be much larger, with more vivid pink and white colours along their bodies. Non-divers might be able to find these shrimp among some of our deeper rockpools – so keep your eyes peeled this summer!

The story: I’d only seen blue sharks in British waters once before, so I was delighted to get the chance on a sunny late-September day in 2020. After a few hours of waiting, the sharks started arriving, as their numbers built up, they became more confident and rewarded me and my buddy with plenty of close passes. This frame of a beautiful female slicing through the autumnal sun was a favourite and stands out because of the blobs of atmospheric lens flare.

Blue sharks are sadly the world’s most fished shark, so it was a real treat to see them. 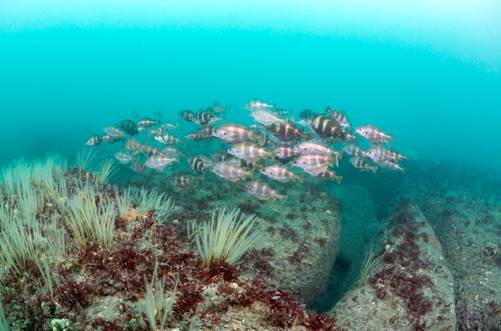 The story: Photographing these large shoals can be a challenge as the fish are highly reflective and change direction constantly. One summer, I was drifting through crystal clear waters over an area of huge boulders off the Jurassic Coast in Dorset. The boulder tops were covered with red seaweeds, sponges and antenna hydroids. Suddenly I was joined by this small shoal of bib which swam alongside and just in front of me for several minutes. They would often bunch together nicely, allowing me to snap away as we floated along in the gentle current. It’s wonderful, relaxing dives like this that give you fond memories of British diving and keep you coming back for more. 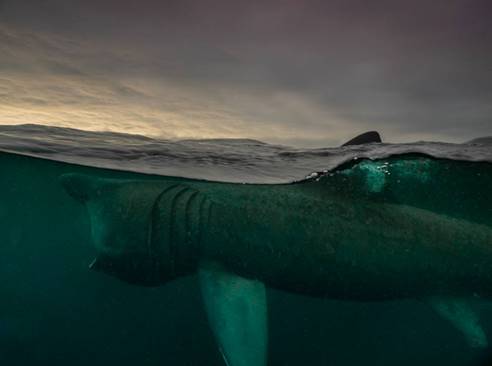 The story: I’ve been over to the Island regularly in the last few years to photograph this huge fish as it migrates up the west coast of Scotland. I wanted to do something different from the classic head-on open mouth shot, so I had a custom bit of photography gear built to try and take split shots – something that was rarely seen. It was 2 years in the planning and a real technical challenge due to the dark, plankton-rich waters, but I had a glorious week on the island with multiple dreamy encounters. This shot was taken on the last night, just as the sun was setting. 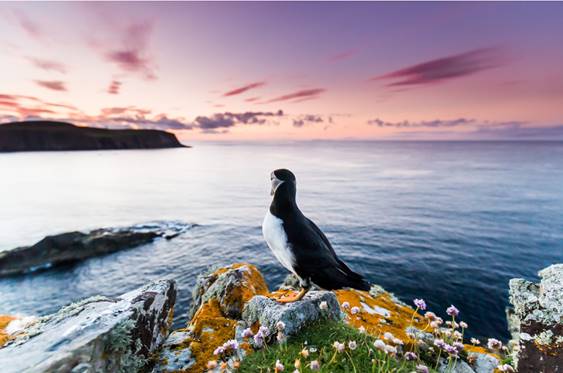 The story: When photographing an animal, eye contact is a critical component, allowing your viewer to connect with the image. This image breaks many of the traditional rules. The setting sun, the uneasy pose of the puffin and the scene all throw up many questions and thoughts. Where is the puffin looking? What is it thinking? What lies beyond the horizon?