The ED Society: Breakthrough in research for Ectodermal Dysplasia

This same year an international team of researchers, one of whom, Professor Angus Clarke, is the Chairman of the ED Society’s Medical Advisory Board, identified the first gene responsible for the X-Linked Hypohidrotic Ectodermal Dysplasia. Since that time research has continued around the world and more Ectodermal Dysplasia genes have been found.

XLHED is a rare disease that affects approximately 4/100,000 live male births every year.  This genetic disorder is a dermatologic-related condition that leads to abnormal development of the skin, sweat glands, sebaceous glands, hair, oral cavity and respiratory mucosal glands resulting in serious clinical manifestations such as hyperthermia,  craniofacial anomalies and recurrent respiratory infections.

A greater understanding of the identified genes and better treatments have enabled us to help our families lead a near-normal lifestyle. 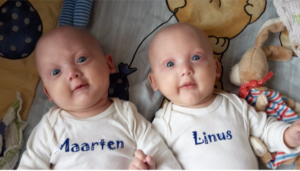 Edimer Pharmaceuticals’ XLHED Newborn Clinical Trial began back in 2013 and was the first one to test a potential treatment for ectodermal dysplasia. They tested the use of EDI200, a protein therapy, to treat the symptoms of 10 newborns affected by x-linked hypohidrotic ectodermal dysplasia (XLHED). This trial completed recruitment in 2015, however, they didn’t see significant changes in sweat gland function and other early markers of biologic activity.

Edimer and the research investigators involved concluded that the babies didn’t receive the protein early enough to have a significant impact. One of the investigators, Dr Holm Schneider, had successfully explored a way of earlier dosing that would work not only in animal models but also in affected humans.

As a result of his research findings, he dosed twin boys with XLHED in utero in the spring of 2016 and a third infant a few months later. All three treated children have since been able to sweat normally and have had no problems during summertime. They also show normal saliva production and clearly more tooth germs of the secondary dentition than their untreated affected brothers.

In 2020, EspeRare entered into a partnership with the Pierre Fabre group to develop ER004, a  novel in utero protein replacement therapy for the treatment of X-Linked Hypohidrotic Ectodermal  Dysplasia (XLHED), a rare paediatric genetic disease.

There is currently no approved therapy for the treatment of XLHED and ER004 has the potential to become the first-ever prenatally administered drug to correct a genetic disease before birth.

“Rare diseases, such as XLHED, often don’t receive the attention and research investments that patients and their families deserve. The FDA’s decision to grant Breakthrough Therapy Designation to ER-004 for the prenatal treatment of XLHED represents a significant milestone for patients, and EspeRare alike, in highlighting the severity of this condition and the importance of offering a potential first therapeutic option to this underserved patient population. This innovative treatment approach has the potential to fundamentally change the lives of these patients and may also pave the way for other prenatal treatments to correct genetic conditions before birth. We look forward to continuing to work closely with the XLHED patient community towards these goals.”

At the end of 2021, Pierre Fabre and the EspeRare Foundation announced they were to start the EDELIFE clinical trial of a prenatal treatment for XLHED, enrolling patients geared towards marketing approval.

The XLHED clinical trial is open to pregnant women who have not yet reached the 23rd week of pregnancy, have genetic confirmation of their XLHED status and have their unborn son affected.

Pregnant women will be enrolled in the study at investigational centres in Europe and in the USA, under the care of clinical experts.

The ED Society continue to support this research, which is focusing on treatment to correct some of the symptoms in X-Linked Hypohidrotic Ectodermal Dysplasia.

We will keep you up to date with all the latest news, but if you are interested in knowing more about the EDELIFE clinical trial, please visit: www.clinicaltrials.gov.