A charity team of 100 runners has raised more than £42,000 for a children’s brain tumour charity by running the Cambridge Half Marathon – enough to fund care for every child newly diagnosed with a brain tumour in the East of England this year.

The team, led by Tom’s Trust’s Co-founder Debs Mitchell, has successfully raised £42,190 with more still coming in – well over the £40,000 target. The aim of the Cambridge Half Marathon campaign, called Run for a Year, aimed to encourage people to run to raise enough for all 40 of the newly diagnosed children in East Anglia.

Debs Mitchell, who co-founded Tom’s Trust, completed the half marathon in two hours 28 minutes – her first half marathon since the death of her son, Tom, in 2010, who the charity is named after.

Other runners for Team Tom included families who have accessed support provided by Tom’s Trust, and corporate supporters from Grant Thornton and Novacyt. Runners also included Ben Blowes, who raised over £250,000 for the charity in 2020, and Vicky Knight, last year’s Cambridge Half Marathon winner. The pair helped with training the 100-strong team. 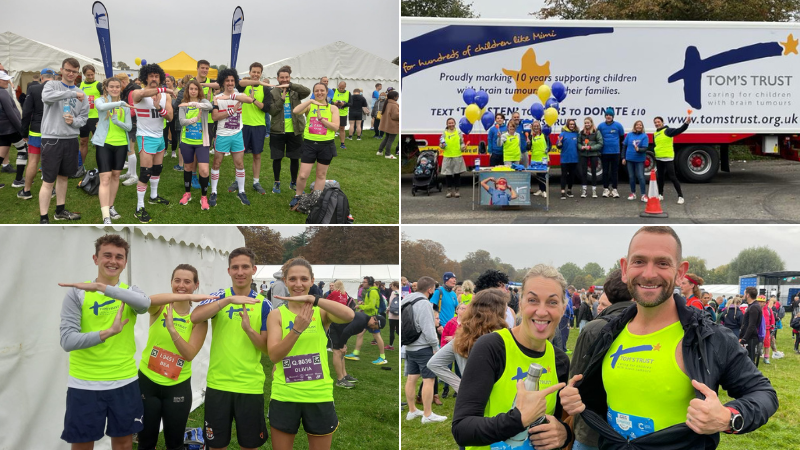 “I’m thrilled to have finished the race and really happy with my time and thought of my son Tom and all the other children who need Tom’s Trust’s help as I ran around the course. I’m so, so grateful to all the runners and we’ve all come away with a great sense of pride and accomplishment. The comradery could be felt from the minute our team signed up to take part right through to the end of this weekend, and I am so pleased that 40 newly diagnosed children will now be able to get the psychological care they need.

“We’d also like to thank the Gog Magog Farm Shop in Cambridge who donated food to our runners, DPM Services who sponsored our vests, and Waitrose for keeping us hydrated with bottled water, as well as our generous volunteers who we couldn’t have done this without. We also have to say a huge thank you to Turners Soham Ltd. Their team not only ran the race for us and fundraised but donated two lorries to us for advertising our charity which will be on the UK’s roads for the next ten years. The first made its debut at our cheer point at the Cambridge Half Marathon, and it made a huge impact.”

The funds will provide vital psychological support to these children and their families from the point of diagnosis.

You can donate to the team by visiting their JustGiving page.