FORMER EastEnders actress and TV presenter Tamzin Outhwaite has been announced as a Celebrity Ambassador of Noah’s Ark Children’s Hospice in north London.

The 51-year-old star, who will be competing in the new BBC reality show ‘Freeze the Fear’ starting on 12th April, visited Noah’s Ark’s state-of-the-art hospice, The Ark, in High Barnet to meet some of the children supported by the charity.

This includes Samuel, aged two, who lives with a rare genetic disorder, fragments of Trisomy 13. Samuel has been cared for by Noah’s Ark since he was a few months old, starting with music therapy sessions from a therapist on the Neonatal Intensive Care Unit. For the last two years, Samuel and his family have received a whole range of support from the charity – including Occupational Therapy, Art and Music Therapy and respite made possible by the Specialist Nursing Team. All of the support aims to help Samuel in his development and give him the very best quality of life.

“Being referred to Noah’s Ark has been transformational for our family and has empowered us to support Samuel in his development, helping him to enjoy life as a child and giving him the very best chance in life.

Whether it’s been through respite provided by Specialist Nurse Care, play sessions at The Ark, or working with their Art Therapist on how we can tailor play to Samuel – Noah’s Ark helps us make the most of every day we have as a family. It is so important that more people are aware of the support that Noah’s Ark offers so more families like mine can get the support they need.” 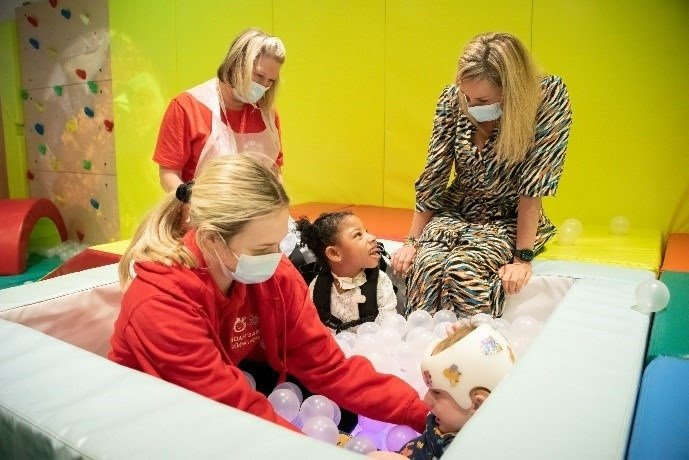 Tamzin also met members of Noah’s Ark’s inspirational nursing team to learn about the charity’s campaign to enlist an additional ten children’s nurses. The campaign seeks to address the urgent need for more nurses to care for children in north London and Herts Valley who, like Samuel, are seriously unwell.

According to industry research, 60% of nurses feel that they are too busy to provide the level of care that they want, with a further 37% saying that they are seeking a new job for reasons including feeling undervalued. Noah’s Ark is aiming to show a different side to a career in nursing by shining a light on the unique aspect of children’s hospice nursing, which allows caregivers to spend time, build bonds and create lasting memories with the babies and children at the Ark. Noah’s Ark nurses must be highly skilled in paediatric care but also be able to pull funny faces and play hide and seek.

“The Ark is a place of play and real connection for children who are seriously unwell. It’s also, much to my surprise, full of laughter – which I wasn’t expecting from visiting a children’s hospice! I am so pleased to have become an Ambassador for Noah’s Ark and am looking forward to raising awareness of this vital cause. A big focus at the moment is on recruiting ten additional children’s nurses to join their inspirational team so that they can care for more babies and children in London. I encourage anybody who might be interested to get your application in soon!”

“Many people imagine children’s hospice care is all about supporting children in their final days. In reality, our nurses spend most of their time helping children to have fun and make the most of every day of their lives. We’re looking for paediatric nurses of all levels of experience who want to spend more time with the children they look after, supporting them throughout their journeys and helping families make memories that last a lifetime. We’re so grateful to Tamzin for helping to raise the profile of our vital care for babies, children, young people and their families.”