Talkback UK: How Many More Times?

WHEN a 2019 BBC Panorama programme revealed the appalling mistreatment of patients at Whorlton Hall Hospital, there was a depressing feeling of déjà vu.

The then Care Minister, Helen Whatley, said it was ‘deeply concerning. Nobody should be receiving such poor care. I am determined that this level of care should no longer have any place in our health system.’

A laudable statement, albeit uncannily similar to that of her counterpart, Norman Lamb, after a Department of Health Review of the 2011 Winterbourne abuse scandal eight years earlier – ‘What happened at Winterbourne View Hospital was horrifying for both the patients and their families. Like many people who watched the BBC Panorama Programme, I was shocked, angry, and disappointed by the way people with learning disabilities or autism and who have mental health conditions or behaviour that challenges were treated. It was unacceptable.’

The Prime Minister at the time, David Cameron, agreed and promised the mistreatment of patients would never happen again. A Department of Health Review concluded that too many people with learning disabilities and autism were in hospital, often far from family and friends, because the right services to support them in the community were not in place. As a result, a commitment was made to close specialist hospitals and move to local, community-based provision.

In the meantime, these horrific places still exist. Poor care, undignified, inhumane treatment of autistic people and people with learning disabilities continues beneath the radar until the next scandal is revealed. This has included the use of physical restraint, seclusion, segregation, mockery, and intimidation. Shockingly, of the 599 inspections of health and social care facilities, carried out by the Care Quality Commission (CQC) in England in the past month, almost half either required improvement or were deemed inadequate. 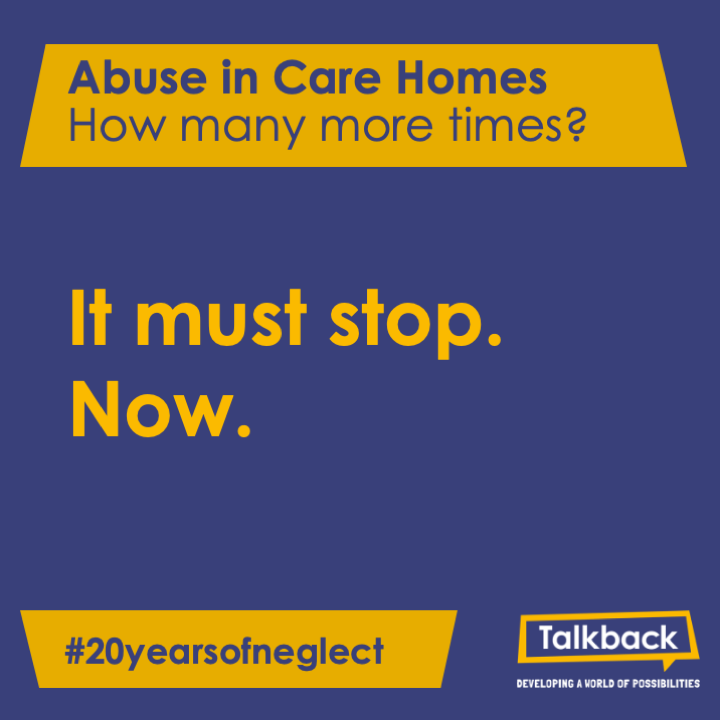 Twenty years ago, in 2001, a long-overdue white paper was released by the government – Valuing People: A New Strategy for Learning Disability in the 21st Century. It promised widespread reform. Since then, successive government ministers have rightly been appalled each time an outrage hits the headlines. They have stated, in no uncertain terms, that such treatment is not acceptable; but their attempts to fix this broken system have fallen way short.

And, in the summer of 2021, the CQC closed Eldertree Lodge in Staffordshire, a 41-bed inpatient facility for adults with learning disabilities and autism, due to unsafe patient care and abusive treatment by the staff. Inspectors found that the service had insufficient numbers of nursing and medical staff who knew the patients and was over-reliant on agency workers. The hospital was also unhygienic and poorly maintained.

Numerous incidents were observed where staff showed a lack of compassion verging on cruelty, including multiple examples where staff pulled or dragged a patient to the ward seclusion room. The report cited intimidating body language, excessive force, ill-treatment, abuse, and inappropriate restrictive techniques.

There is always an indignant 24-hour media maelstrom after each case – but they never sustain a campaign or keep it in the public eye, as it’s not politically of interest to them.