THIRTY-five years after Suzy Lamplugh disappeared in the course of a working day as an estate agent, the Suzy Lamplugh Trust is calling for action to address the shockingly low conviction rates for stalking cases across the country.

There are an estimated 1.5 million cases of stalking every year in England and Wales, but only 0.1% of cases resulted in a conviction for stalking in the year ending March 2020. Of those, only 26% (304 perpetrators) received an immediate custodial sentence. This is putting victims, around 80% of whom are women, at risk.

The Trust, set up by her parents who believed Suzy might have herself been stalked, strives to enable individuals and organisations to feel safer through campaigning, education, and specialist support services. During its 35-year history, it has been instrumental in bringing about the Protection from Harassment Act, introducing specific offences for stalking and driving improvements in licensing safety checks for taxi and minicab drivers, among other things.

However, the Trust is highlighting that more still needs to be done to reduce violence and aggression perpetrated in our society, especially against women and girls. Despite the seriousness and prevalence of stalking, as with other crimes such as rape and sexual assault, this crime continues to be shockingly under-recorded and under prosecuted. In the year ending March 2020, only 32,217 stalking offences were recorded by the police – representing just 2% of all estimated stalking crimes – with only 3,506 recorded offences charged. The percentage of reported cases being charged has fallen year on year over the last 5 years, from 23% in the year ending March 2016 to only 11% in the year
ending March 2020. These figures demonstrate the simple fact that the overwhelming majority of stalkers are never charged, let alone convicted. 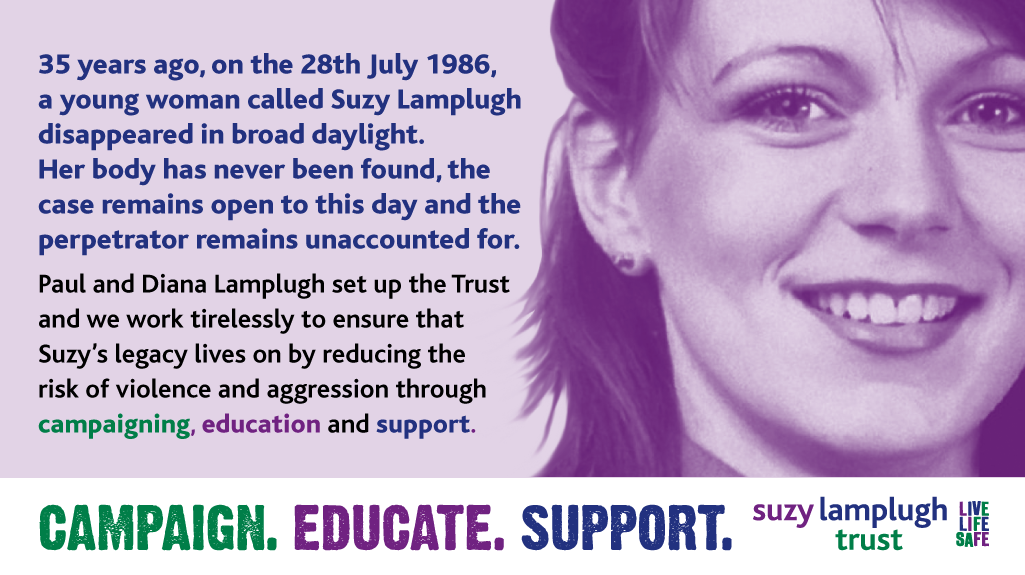 In honour of Suzy, the Trust is marking the last 35 years by highlighting the journey it has been on in its mission to reduce violence and aggression in society and the critical work that lays ahead. There is still a need for a deep-rooted systemic shift across the criminal justice system to ensure the appropriate protection and outcomes for victims. The Suzy Lamplugh Trust continues its call for the government to implement an independent task force to determine the reasons behind the concerningly low conviction rates for stalking. There is also an urgent need to increase training and awareness of stalking among criminal justice officials and provide better support for victims through increased funding for specialist advocacy services.

“The journey of the Trust over its 35-year history has been astounding in its achievements despite being born from the most tragic of circumstances, and we work tirelessly to ensure that Suzy’s legacy lives on. However, while we have achieved great things and seen improvements in the support available to victims of stalking and other forms of violence and aggression, there is so much more to do to reduce incidents of stalking and harassment and ensure the safety of victims. We are calling on the government today to address the prevalence of violence against women and girls in society and to take action.

“The shockingly low conviction rates for stalking leave thousands of victims without the protection they so urgently need to reduce the risks to their physical and mental health. It takes immense courage to come forward to report stalking behaviours which have a devastating impact on victims’ lives, and it is simply not good enough that so many cases fall by the wayside without attaining the justice victims need and want.”

“I have been a victim of stalking for over a decade, experiencing extreme psychological terror, continuous hyper-vigilance, and impacting every aspect of my life, which required years of therapy due to the trauma. Unfortunately, the police weren’t taking my case seriously, despite the volume of evidence, and it was clear that police and prosecutors had little understanding of the crime and failed me. They repeatedly focused on single incidents rather than the pattern of behaviour that defines stalking.

“The stalker was eventually charged 8 years later when the police realised they couldn’t ignore my case any longer. The case went to both criminal and civil courts, resulting in restraining and injunction orders, but provide little peace of mind. Until more in-depth specialist training is rolled out across all police forces and courts, convictions, and assurance for victims’ safety, will continue to be near impossible to achieve. Better recognition of the behaviours and the risks are vital, along with better funding for specialist advocacy services to support victims.”

“Far too many victims never see their perpetrators being convicted for these offences. We see offences related to stalking being misrecorded as more minor offences, without consideration of how a perpetrator’s behaviour might escalate to the detriment of victims. Whilst we have seen some improvements in this area, including the introduction of the Stalking Protection Orders in 2020, we need to see more work to ensure that those working in the criminal justice system are trained to properly identify stalking-related offences
and victims of stalking must have their complaints properly acknowledged and taken seriously.”

Highlights of our 35 years of work will be available on the Suzy Lamplugh Trust website this week: https://www.suzylamplugh.org/blog/suzy-lamplugh-35-years.