Superhuman taking on marathon after near death heart operation 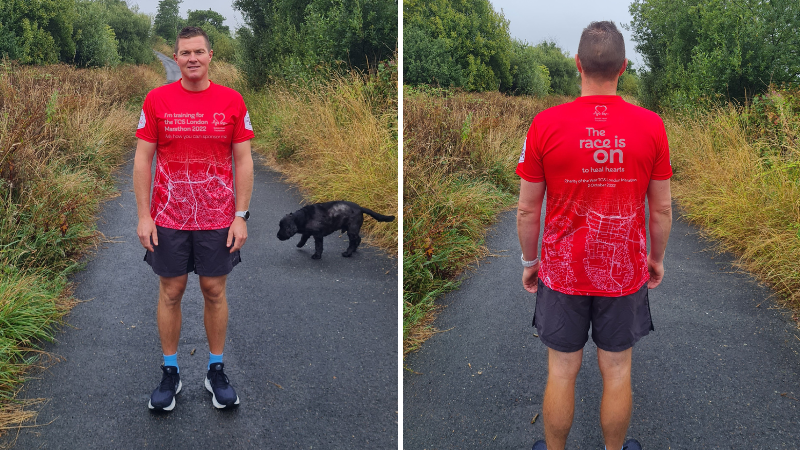 SEVEN years on from a near-death experience, Cornwall local Adam Brenton will take on the TCS London Marathon for the British Heart Foundation (BHF) on the 2nd of October.

In October 2014, Adam, 38, from St. Columb, began feeling unwell after developing flu-like symptoms. His symptoms persisted and Adam’s local GP referred him to a specialist at Treslike Hospital. In February 2015, following further tests, Adam received a shock diagnosis of endocarditis, a potentially fatal infection of the inner lining of his heart.

The only way to save Adam’s life was by undergoing lifesaving surgery. He was transferred to Bristol Heart Hospital. Due to its complexity, his operation did not have a name and had no guarantee of success. His doctors were unable to plan his procedure beforehand, they were only able to work out a plan once they began operating.

Following his seven-hour operation, Adam spent eight days in intensive care and a total of 11 gruelling weeks in hospital. Despite the uphill challenge he braved adversity and underwent an extensive rehabilitation programme. Adam now lives with a metal aortic valve and has to take daily, lifelong medication to stay healthy. But he’s still able to do everyday things that he loves, such as running. Over the past seven years, Adam has made an incredible recovery since his life-saving operation and has now set his sights on running the iconic London Marathon to raise money for the BHF.

Adam originally planned to take on the London Marathon in 2019. Whilst training he managed to raise an incredible £15,000 for the British Heart Foundation, the most by an individual fundraiser in that year. Sadly, things didn’t go to plan and he had to pull out of the event due to injury.

Three years on Adam is thankfully now injury-free and has pledged to raise even more money, to help others like him when he takes on the 26.2 miles for the BHF this October.

“It’s been a long and difficult journey over the past seven years since my life-saving heart operation. Not being able to do simple things such as walking to the front door without getting out of breath in the immediate aftermath of the surgery was incredibly challenging, it turned my life upside down.

“On top of everything else during my recovery, I put on weight and was 18 and a half stone at one point. I was determined to lose the weight and I’ve worked hard to get fit again.

“Now I’m in a position where I run three or four times a week and I’m the fittest I’ve ever been. It’s been a long journey to get me to the start line of the London Marathon. I was gutted to have to pull out in 2019, but it means I can raise even more money for the BHF, which is a charity close to my heart. I’m very excited to say I’m looking forward to finally joining the thousands of other runners at the start line in October.”

The British Heart Foundation are Charity of the Year for the 2022 TCS London Marathon and hopes to raise more than £3 million for regenerative medicine, a cutting-edge field of research that has the power to unlock a cure for heart failure.

Nearly a million people in the UK are living with heart failure. The money raised by runners, like Adam, will help the BHF fund cutting-edge research into regenerative medicine that the charity says could lead to new treatments within a generation.

“Adam’s heart story is one of strength and bravery. After everything he has been through over the past seven years and after nearly losing his life, it’s so inspiring to hear how passionate he is about helping the BHF make a difference by taking on the TCS London Marathon.

“As the 2022 TCS London Marathon Charity of the Year, the BHF are relying on the generosity of runners like Adam to help raise £3 million for our pioneering research into regenerative medicine.

“I wish Adam all the very best of luck for the 2022 TCS London Marathon and thank him for all his fantastic fundraising. . The race really is on. Every single step our runners take will help power lifesaving science with the potential to heal damaged hearts over the UK.”

The British Heart Foundation is calling on everyone to use their ballot place to join Team BHF and take on the 2022 TCS London Marathon to help fund cutting-edge research into regenerative medicine. For more information, visit: www.bhf.org.uk/londonmarathon2022