CHILDREN and young people at Edinburgh’s children’s hospital were given a Marvel-lous Christmas surprise when a team of costume-clad superheroes scaled down the side of the building.

The daredevil troop of Batman, Thanos, Spiderman and the Joker descended the Royal Hospital for Children and Young People, much to the delight of unsuspecting children, families and staff watching through the ward windows and from the ground below.

The thrill-seeking team did two abseils from different parts of the hospital to ensure as many children and young people as possible had a chance to view the spectacle, and even staged a nail-biting superhero versus villain waterfight while suspended in mid-air.

Organised by Edinburgh Rope Access in aid of Edinburgh Children’s Hospital Charity (ECHC), the fearless feat is raising money to bring comfort and joy to seriously ill children in hospital this Christmas and all year round. So far, the heroes have raised an incredible £671.

Nicky Erskine, managing director at Edinburgh Rope Access dedicated the gutsy stunt to all those at the hospital who fight their own brave battles on a daily basis. 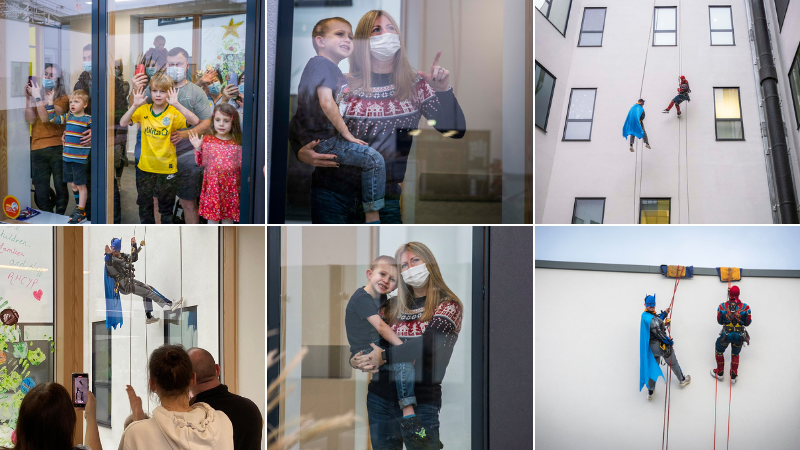 “Abseiling down the side of a hospital isn’t for the faint-hearted but it is nothing compared to the challenges that children and young people staying here face with such courage every day.

“They are the real superheroes so we wanted to do our bit to spread some Christmas cheer, bring lots of smiles to those on the wards and raise funds for an incredibly worthy cause while we were at it.”

“Every year, we at ECHC work hard to bring the joy and magic of Christmas to children and young people in hospital by creating a fun-filled living advent calendar around the wards with a new surprise activity every day.

“We were determined to make our first Christmas in our new home the biggest yet – and the superhero abseil has definitely taken the wow factor to the next level. It was wonderful to see so many children’s faces light up when their favourite heroic character dropped by their bedroom window and gave them a wave!

“We are enormously grateful to the team from Edinburgh Rope Access for being such intrepid supporters. For those facing a hospital stay at this time of year, special events like this really do go a long way in spreading happiness and lifting everyone’s spirits.”

To find out more about ECHC’s Light Up Christmas appeal and to donate, please visit: www.echcharity.org/christmas.