John the Lyon on a special “safari tour” to surprise children

Stroke survivors improved ability to communicate thanks to charity project 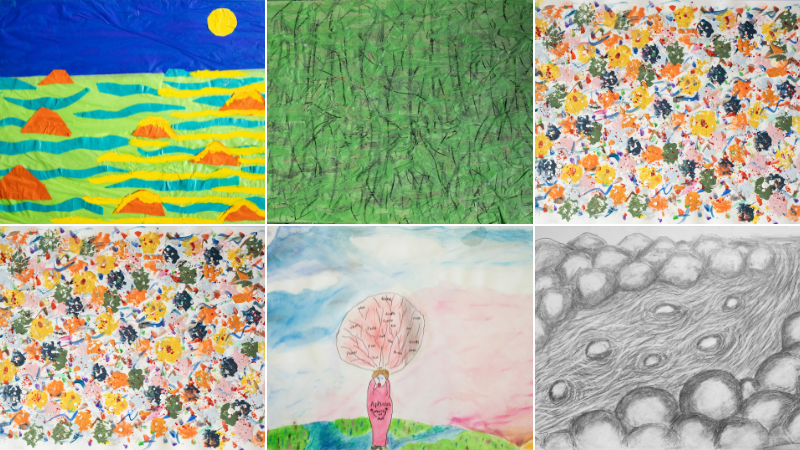 STROKE survivors improved their ability to communicate and use their non-dominant hands thanks to creating artwork while listening to sounds from the British Library’s archive.

The Seeing Sound project brought together people with aphasia, a language impairment caused by damage to the left side of the brain, usually due to a stroke.

Over five sessions between November 2020 and February 2021, the 17 participants, clients at London charity the Free Space Project and Liverpool cause The Brain Charity, created dozens of artworks in response to sounds.

The clips, released as part of the British Library’s Unlocking Our Sound Heritage project, included the songs of chaffinches and tawny owls, streams running through woodland, the babble of seaside piers and even the mating call of a male haddock.

People with aphasia have difficulties with reading, listening, speaking, and typing or writing. Through the project, people were able to find a sense of community, as for many, Seeing Sound was the first time they had spoken to other people with aphasia.

One participant, Alan*, 73, who has a right-sided weakness, improved his ability to use his left hand to create his artworks and said meeting other people with aphasia made him ‘much happier.’

Other people who took part saw huge confidence and mental health boosts and said their spoken language and ability to find words improved.

“I have fluent spoken speech but have difficulty with word retrieval, so often felt like a fraud.

“Meeting other people through Seeing Sound allowed me to have open, honest and frank discussions so I could turn a corner and face my own problems.”

The groups were sent art materials in the post before the Zoom-based sessions. They created artworks visualising the different sounds with the support of artist and speech and language therapist Cat Andrew.

Cat said doing work based on what the group could hear rather than see had huge benefits for the participants.

“Taking the pressure away to do a ‘good’ drawing by simply responding to the sound by making marks allowed people to really immerse themselves in the experience.

“The amount of work produced in a short time, and the quality, was astonishing.

“Listening to sounds without language meant that language processing, which is difficult for people with aphasia, was bypassed.

“Instead, they could attune their ears and respond with their eyes and enjoy a full sensory creative experience without feeling frustrated by their language difficulties.”

The incredible collection of artworks will be exhibited at Kentish Town Health Centre from May 26th until July 20th, before being displayed in Liverpool this October as part of the Fabric District Arts Festival.

The interactive exhibition will see viewers able to scan QR codes next to the multi-media works to play the Sound Archive clips on their own devices as they view the works.

The recordings selected for the project were drawn from the British Library’s vast archive of more than 260,000 wildlife and environmental sounds.

“When curating the packages, I wanted to bring together a diverse selection of sounds that would help participants visualise the various habitats in different ways.

“Some sounds were beautiful, a few were unexpected, but, as sound is such an evocative medium, all had great potential to inspire.

“Being able to share the Library’s recordings, which are for everyone, and hear such positive feedback from participants was an incredibly rewarding experience, and it was wonderful to see the collection being used for such a worthwhile project.”

“Seeing Sound has been a remarkable project for our service users to take part in.

“It has not just given people who have never engaged with the arts before the confidence to explore their creativity – it has given people with aphasia a nurturing ‘safe space’ within which their confidence around not just art but communication too has been able to blossom.”

ShelterBox responds to worst drought in East Africa for 40 years