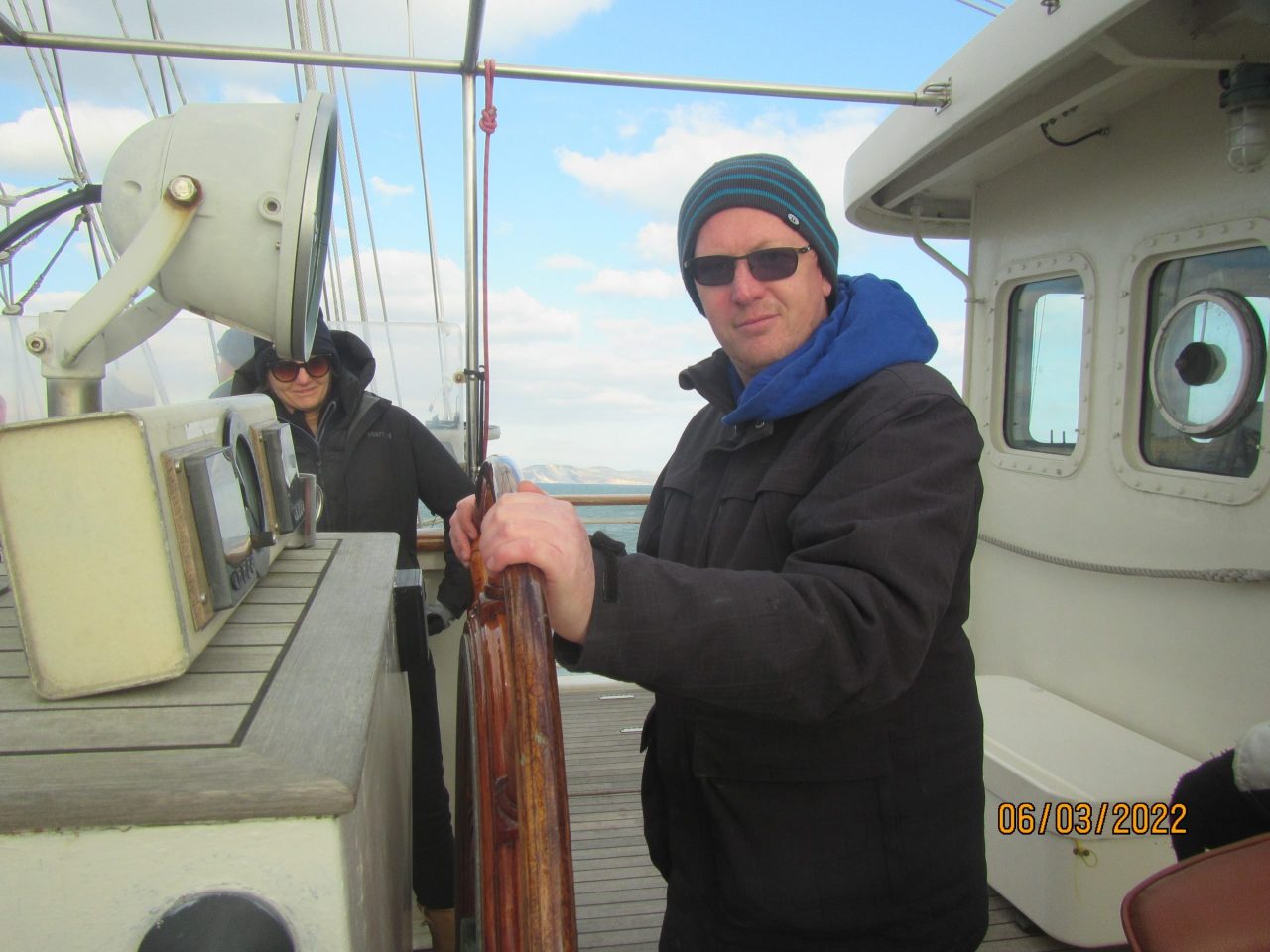 A Dorset man has returned to his passion for sporting adventures after abandoning hopes following a life-threatening brain injury.

Christopher Eades (34), from Weymouth, was diagnosed with epilepsy at 6-years-old. Not letting it affect his love for sport, he would often take part in activities that gave him a buzz – cycling, skiing, diving, and sailing.

In 2017 however, Christopher suffered a brain injury as a result of an epileptic seizure, which prevented him from being able to live the life he’d been used to. Christopher put his sporting adventures on hold for more than five years – leaving his parents, Brenda and Robert, unsure whether he’d be able to experience the kind of hobbies he’d formerly enjoyed.

That was until a few weeks ago when Brenda heard about the global sailing charity the Jubilee Sailing Trust’s (JST) Big Weekend event, set up to allow inexperienced sailors the chance to climb aboard the charity’s tall ship, SV Tenacious, and ‘learn the ropes’ of what life is like at sea.

“Of course, we have the fantastic NHS to thank for their amazing work with Christopher, particularly the Southampton Neurological Unit. But, after his brain injury, still suffering from seizures, and being in an out of hospital, I feared Christopher would miss out on the kind of experiences he’d always loved. But the JST’s voyages were perfect for him to try something new in a safe environment. Plus, we live near Portland Harbour, so it was an opportunity too good to miss and we couldn’t wait to step onboard Tenacious.”

During the weekend, and with encouragement and support from passengers and crew, Christopher was harnessed onto the rigging and was able to steer the tall ship out on the open water, completely independently – something Brenda and Robert said was “incredible to see”.

“This is the first big thing Christopher has taken part in since his accident and I want to say a huge thank you to the JST for making it happen. It’s given Christopher a new lease of life and he is already planning to attend more voyages.

“We wrongly assumed the voyages were only open to disabled travellers, and we were happy to be there for Christopher, but the JST welcome anyone on board, whatever their ability, and being out at sea on Tenacious was also a very rewarding experience for us.”

The JST has a mission to give people of mixed abilities and circumstances the freedom to explore their ability, potential and place in the world through adventures at sea aboard its tall ship, Tenacious.

“I work on cruise ships, so am used to being on the water, but this was something very different. We all got involved, working together to make sure the ship did what it needed to do. It was very emotional, and we’ll be booking another voyage as soon as we can.”

“It’s so wonderful to hear Christopher’s story and to see the positive impact one of our voyages has had on him and his family.

“We want to give everyone the opportunity to explore their potential at sea, whatever their circumstances, and I’m so glad Christopher and his parents enjoyed their trip. We look forward to welcoming them on board again.”

Brenda was awarded a bursary from Rethink Mental Illness, Dorset Carers Support, to help her pay for the JST Big Weekend voyage, as an acknowledgement of being an unpaid carer for her son.

For more information about JST and its work, please visit: https://jst.org.uk/.