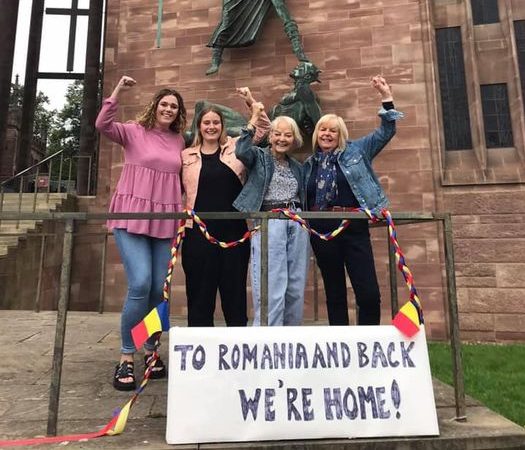 As a volunteer in 2013, I was trusted with giving the young people of the children’s centre therapy with the Bianca Project, teaching them what should be the biggest meaningful occupation to most children – Play! I knew I would love it. I knew that I wanted to create memories, smiles, laughter, happiness and memories, all before I even reached Romania. Once I was in Romania, there were many happy moments, teaching play skills to children and gaining the 3 seconds of eye contact that we had spent a week trying to achieve.

Spending time trying to show the staff of the children’s centre how to make meal-times easier with new techniques and teaching the children how to use a spoon. Helping the children gain the sensory input that they were so seeking so badly. These precious moments, achievements and memories were amazing, however, there was so much more to achieve. I was there for 5 weeks, and I knew that I just could not say goodbye to the children forever. I knew I had to see them again. I asked if I could be considered to supervise new volunteers the following year, and I was told that I could. I knew at this point that I would be involved for a long time, however, the achievements as a charity in 2021 were such a distant dream back in 2013.

When I became a trustee in 2014, I wanted to be able to have more of a say of how we recruited our volunteers, fundraising opportunities and raise awareness for the children that I so frequently referred to as ‘ours’. I never realised that in 2018 we would begin to work on a project, Jim’s House. The idea was founded on a trip to Romania, we all spoke about it, however, when we got back to the UK, it was put to the trustees who all agreed that this would be a brilliant idea, working in partnership with another; charity Love Light Romania. It was for 3 children who the volunteers had seen grow up and who, at the age of 18, would move onto an adult institution. It would save them from further institutionalisation, therefore offer them a home for life.

The three young adults had the potential to participate more independently in many other activities of daily living that they never had the opportunity to in the children’s centre that they had spent most of their childhood in. Jim’s House would also offer the opportunity for the three of them to be a family. They would still have a carer who would support them when needed, however, they would learn more vital daily living skills to live as independently as possible within a community. As a trustee, along with our other trustees, we have changed these young peoples lives beyond what we ever thought was possible. In 2013 I could not have even dreamt of this.

Since 2018, we have been fundraising and raising awareness of Jim’s House to ensure that the three young people can stay there and can have a brighter future. They have achieved more than we could have hoped. As a trustee, it has been very special to be involved in fundraising opportunities to ensure that they can stay at Jim’s House. I have climbed Snowdon with a large group of volunteers in 2020, and more recently, we have collectively completed 3120 miles of running, walking, swimming and cycling, which is the distance from Coventry Cathedral to Jim’s House and back again. We have applied for grants, had Zoom events and increased our monthly donations by raising awareness.

In a world that has been hit by so much during a global pandemic, I have been lucky enough to be part of something that has transformed 3 young people’s lives. I always knew that Share changed lives as I knew what the children achieved with all the therapy we offer each summer, however, this was so much more than I could ever have dreamed of. This has not only changed their lives, but It has also offered me more hope than I could ever have imagined – I am so blessed to be a part of something so life-changing.