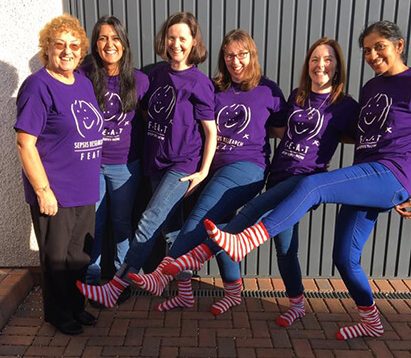 This Volunteers’ Week (1 – 7 June), Sepsis Research FEAT is celebrating its volunteers for their invaluable contributions over the past year and is appealing for others to join them in supporting the charity’s work.

Sepsis Research FEAT is the UK’s only charity dedicated to raising money for research into sepsis. It also works to raise awareness of this life-threatening illness which kills around 50,000 people in the UK every year. The charity gets no government funding and relies on public support to sustain its work and help prevent more sepsis deaths.

In recent months, Sepsis Research FEAT volunteers have been involved in a variety of fundraising activities, including taking part in the UK-wide 5K May challenge and organising a charity football match. Volunteers with personal experience of the illness have also shared their sepsis stories in order to teach others about sepsis and how to recognise the symptoms.

Sepsis stories are particularly important in helping Sepsis Research FEAT raise awareness of the deadly illness. It is appealing for more people to share their stories, particularly young people under 25 who can help the charity explain sepsis to children in schools.

Emma Francis from Kent began volunteering for Sepsis Research FEAT after her son Jack survived sepsis. Emma is encouraging others to get involved in supporting the charity. She said:

“I support Sepsis Research FEAT because it is a charity close to my heart. My son Jack survived sepsis as a toddler and I am grateful for the messages and awareness the charity raises about sepsis. Our family have shared Jack’s story to help raise awareness and I help the charity whenever I can by sharing fundraising and awareness posts across social media. Please volunteer for Sepsis Research FEAT today. They fund research so that more effective treatments can be designed for sepsis in the future and more lives can be saved.”

Another supporter the charity is offering thanks to this Volunteers’ Week is Suzanne Graham from Glasgow who survived sepsis at Christmas in 2018. Suzanne has previously shared her sepsis story and spoke at last year’s World Sepsis Day launch event, organised by Sepsis Research FEAT. She also recently completed the 5K May challenge with her dog Ozzy to fundraise for the charity.

“I was keen to volunteer with Sepsis Research FEAT so that I can help raise awareness of this life-threatening condition. As a sepsis survivor, I want to support the charity’s work so that many more lives can be saved.”

“A huge thank you to Emma, Suzanne and all our volunteers for the support they have given to Sepsis Research FEAT over the last year. From taking part in fundraising activities to sharing their stories in order to raise awareness of sepsis, our volunteers play a vital role in the fight against this life-threatening illness.

“This Volunteers’ Week, we’re asking you to consider joining them in supporting this important cause. Maybe you have personal experience of sepsis and would like to tell your story to help others learn about the illness and recognise the symptoms. Maybe your workplace is looking for a charity to support this year. Or maybe you have an idea for a fundraising challenge or event, either individually or as part of a club. We would be very grateful for whatever time and support you could offer to Sepsis Research FEAT and our work.”

Adopt-A-Child: Where are they now – Dr Pablo McKeown