BEREAVED Armed Force children’s charity, Scotty Little Soldiers, have announced the return of their most popular fundraising event, the May Marathon.

Every year since 2017, participants have signed up to complete the marathon distance of 26.2 miles throughout May however they choose. That could mean walking, running, crawling, cartwheeling or absolutely anything else they can think of – any and all methods are welcome. The distance can be covered in as many trips as required; the only rule is that it must start and finish within the month.

12-year-old Sebastian Hill has completed the May Marathon every year since he joined the charity in 2017, raising over £2,000 in the process. His dad, Royal Navy chaplain Reverend John Hill MBE, died of a heart attack in 2010.

“I love Scotty’s. I love everything about it, from the Christmas parties to the vouchers they send me on Remembrance Day and my dad’s anniversaries. I’ve made so many friends through Scotty’s and I know now that I’m not the only one who has lost their dad and that’s really comforting.”

It’s not just Scotty’s beneficiaries that get involved, either. In 2020, comedian and columnist Jenny Beake took part in the challenge while dressed up as Wonder Woman, and in 2021 her and Annie Kelly completed the challenge in the form of a chicken and an egg. The pair raised a great sum of money and turned more than a few heads in the process.

“Death is always hard to deal with, especially for a young person losing a parent. The armed forces protect us all, and the death of those fallen heroes is far-reaching for their families. I choose to run the May Marathon in support of Scotty’s to show people are willing to help make a difference and to prove life can be fun again.”

For most of us, those 26.2 miles are challenging enough as it is, but more experienced runners are free to push themselves even harder should they want to. Scotty’s supporter, Brendan Holmes, set the bar high in 2017 when he took to the marathon wearing flip flops. Not only that, but he also set himself the extra task of running an additional 74 miles – completing a whopping 100 miles by the end of the month. 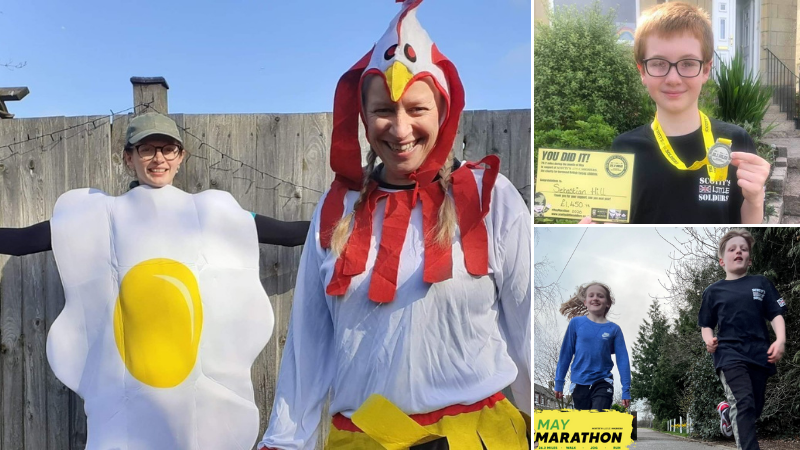 “I truly believe that the work Scotty’s does has a huge benefit to its members. It gives the children a real sense of community and lets them know that there are people out there who care.”

Scotty’s Little Soldiers was set up in 2010 by war widow Nikki Scott and offers integral support to children and young people aged 0-25 who have experienced the death of a parent who served in the British Armed Forces. Nikki saw the devastating impact the death of her husband, Corporal Lee Scott, had on their two young children and wanted to help others in the same situation.

The charity aids hundreds of bereaved Forces children and young people around the UK, offering services such as guidance to parents and carers, access to child bereavement support, personal education and learning assistance (including grants) and fun activities such as holiday respite breaks and group events. These are all designed to remind those supported by Scotty’s that they are not alone.

“I’m really excited about this year’s May Marathon. The support we receive every year is incredible, and it always makes me so happy to see our own members taking part. I’m always touched when I see how much they want to help the charity that helps them. I’ve taken part myself, so I know how hard it is. I’m not much of a runner, but I got a real buzz from the experience and knowing all the effort I put in was helping bereaved children and young people is a feeling that can’t be matched. The struggle I felt running those 26 miles is nothing compared to what our members go through. The money raised from the May Marathon challenge always goes a long way in helping us continue to deliver high-level support to bereaved children and young people, and I can’t wait to see everyone getting involved.”

Register for the 2022 May Marathon challenge, by visiting: scottychallenges.co.uk/challenge/month-of-may-marathon/.