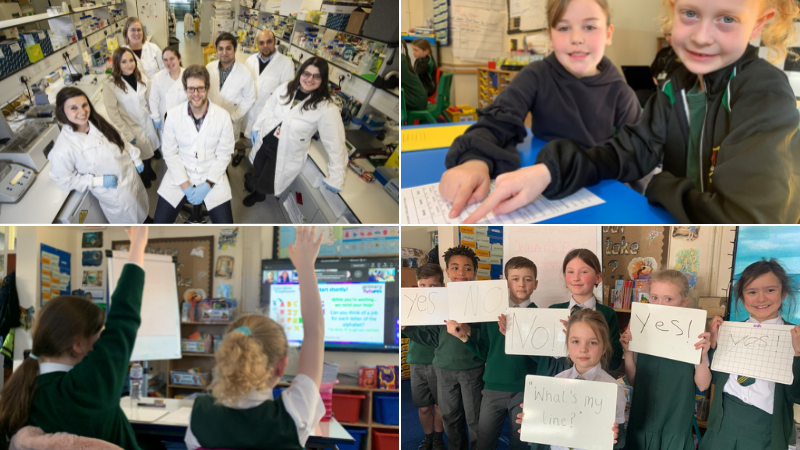 CHILDREN from a Blackpool primary school heard from a marine biologist, horticulturist and a scientist who works with some of the world’s deadliest snakes, during a virtual activity aimed at showing youngsters how what they learn in the classroom can lead to an interesting and exciting future.

The children, who all attend St John Vianney Catholic Primary School, in Glastonbury Avenue, were told how Hannah Bates swapped acting for a career that involves swimming with sharks at the Sea Life Centre in Blackpool, while Stuart Ainsworth – who grew up in South Shore, Blackpool – explained how it’s possible to ‘milk’ a snake for its venom.

The event is part of the Inspiring Blackpool project, which helps schools link with role models locally as well as further afield with tailored sessions that complement the curriculum, broaden horizons, link learning to the future and challenge stereotypes.

Pupils at the school took part in the ‘What’s My Line’ session, where they asked volunteers a series of yes or no questions to try to guess what each guest did for a job.

Teacher Damian Horton, the school’s careers lead, found the experience inspiring and is already planning his next event. He said:

“Blackpool is one of the most disadvantaged areas in the UK and for the children at St John Vianney’s, seeing people from the town who have gone on to have brilliant jobs – people like Hannah and Stuart – who they can relate to, is inspiring.

“We’ve already taken part in an online event for World Book Day and we’re looking forward to being more involved with the project in the future.”

Volunteer Stuart Ainsworth, who still lives in Blackpool, has worked as a molecular biologist for the last six years at the Liverpool School of Tropical Medicine (LSTM); the world’s oldest school of tropical medicine.

Experts at the Liverpool School of Tropical Medicine are tasked with finding vaccines for diseases including Ebola and Malaria but Stuart’s job is to make medicine, commonly known as anti-venom, for people who have been bitten by venomous snakes.

He explained how 200 snakes – including deadly Black Mambas – are kept safely on site at LSTM and how part of his job involves using the venom extracted from the snakes in a laboratory.

Nine-year-old pupil Seb, who would like to work with animals when he’s older, said:

“I love snakes and have always wanted a pet snake. But my mum bought me a geko called Echo instead and he’s brilliant.

“I have really enjoyed listening to all of the volunteers and think that Stuart has such a cool job, working with snakes.”

Each volunteer finished the session with questions and advice for the youngsters, who range from age 4 up to age 11.

Hannah answered questions which included ‘what’s the most important thing about your job’ and ‘have you ever fed the sharks’. Hannah said:

“Sometimes, if the animal care team are busy, I’ll help to feed the sharks. We have to have two people there just in case something bad was to happen – if someone was to trip or someone was to fall in – and every couple of weeks, I get to go with them and help do what we call ‘target feeding’.”

“The Primary Futures set up allows us to make contact with volunteers who work in a vast array of jobs, requiring many different skills.

“It enables the children to see the value in learning a wide range of curriculum subjects as each can open up doors to so many future vocations. Ultimately, we want to develop our children’s aspirations at the earliest opportunity.”

The sessions are run by Inspiring the Future and are funded by the Opportunity Area, to build on previous work by Primary Futures in the area.

“We tailor each session to the school, with planning before the session to understand the needs of the school and its pupils.

“The key objective is to motivate and inspire children and to broaden their horizons. We want to challenge stereotypes and link the sessions to subject learning.

“Each school can take part in live virtual events, and they will also have access to pre-recorded resources.

“Excellent work has already been done in the area over the past few years, to reinvigorate Blackpool as a leading area of raising aspirations and connecting children with future employment opportunities in the town and beyond.”

For further details on the project, visit the Primary Future website and, to become a volunteer, click here.