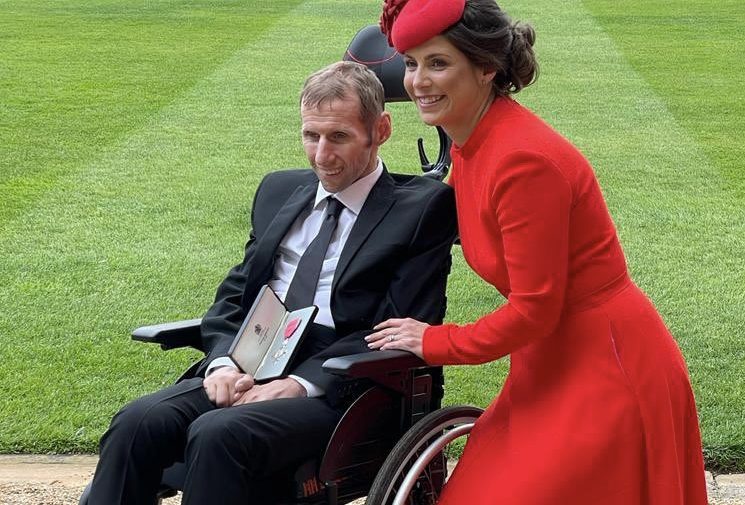 ROB Burrow, a rugby league legend and charity campaigner, was awarded his MBE at Windsor Castle.

Burrow, 39, was honoured in the 2021 New Year Honours list for his contributions to rugby league and the MND community.

In 2019, he was diagnosed with Motor neurone disease (MND), a degenerative disease that affects the nerves in the brain and spinal cord.

He has documented his journey with the condition since his diagnosis in order to raise awareness and funding.

Rob and Lindsey Burrow were on hand to collect the honour and he was presented with the medal by the Princess Royal.

Rob said he was taken aback when he learned of the honour.

“It’s not something I ever imagined I’d achieve in my career, but I’m incredibly honoured to get this honour.”

“It’s also a special moment for my family,” he said.

Congratulations @rob7burrow on collecting his MBE for services to Rugby League and the #MND community.
Picture courtesy @leedsrhinos – more on #BBCBreakfast on Wednesday pic.twitter.com/q9zEzF87jO

The athlete, who was born in Pontefract, now communicates with the help of a computer and voice samples.

He and his family are leading a £5 million fundraising campaign to construct an MND centre in the city where he spent his sporting career.

They’re assisting the Leeds Hospitals Charity, where Burrow was treated, in raising funds for a new facility.

“ I’m so proud to receive this because of my rugby & the awareness for MND – but most importantly it means that MND continues to be talked about and in the public eye ” – could @mndassoc patron #RobBurrow be any more deserving of the MBE he received today from Princess Anne? 🙏 pic.twitter.com/4ORuFEg5Pi

According to the organisation, about £2 million has been raised since the appeal began in September.

Burrow described the centre as a “calming and tranquil” that would provide an escape from MND’s “prison.”

Kevin Sinfield, a former teammate of Rob Burrow, was awarded an OBE in January for services to rugby league and charity fundraising at Windsor Castle.