RNLI release new video ahead of period of remembrance 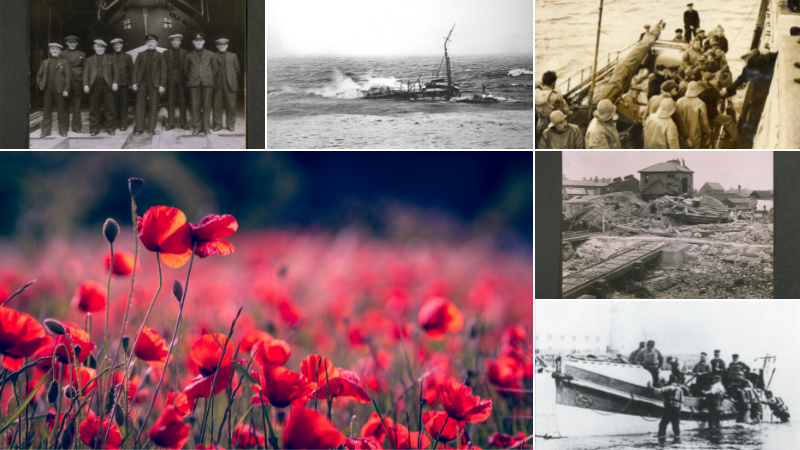 As the nation prepares to mark Remembrance Day and Remembrance Sunday, the Royal National Lifeboat Institution (RNLI) remembers those who gave their lives during two world wars trying to save others.

From being gunned down by German aircraft to getting blown up by a floating mine, being washed overboard during heroic rescue missions to getting caught in an air raid, a total of 40 lifeboat crew lost their lives during the period of the two World Wars.

Despite being dedicated to saving lives, a total of seven RNLI lifeboats were lost during World War 2 – from air-raids on lifeboat stations, to being captured.

In 1940, the RNLI’s St Peter Port lifeboat from Guernsey was heading to St Helier lifeboat station on Jersey and then onto England. During the journey, the lifeboat was machine-gunned by three German aircraft and sadly, a member of the crew, Harold Hobbs, who was the coxswain’s son, was killed.

A year later in 1941, just a few days before Christmas on 18 December, Coxswain Jack Slade and shore signalman Thomas Escott went out in the coxswain’s boat to investigate a floating object. On getting closer it was revealed to be a floating mine which tragically exploded destroying the boat and killing both men. Also in 1941, Thomas Pratt, an RNLI mechanic lost his life while covering at Falmouth Lifeboat Station when an air raid struck the town.

Although lifeboat crew were lost, some directly due to the war, and some undertaking routine rescues in horrendous conditions in rowing and sailing lifeboats, all was not in vain as lifeboats worked tirelessly to save those in peril on the sea. During the first and second World Wars lifeboats launched 5,478 times and saved a staggering 11,698 lives.

No matter what side of the fight they were on, RNLI lifeboat crews launched to save lives at sea. During the First and Second World War, lifeboat crew launched 5,568 times and saved 11,708 lives.

With thousands of younger men being called to serve their country on the front line, the average age of RNLI lifeboat crews increased with lifeboats crewed by 50, 60 and 70-year-olds.

On 7 May 1915, the British ocean liner RMS Lusitania was torpedoed and sunk by a German submarine, causing the deaths of 1,198 passengers and crew. She was 11 miles off the southern coast of Ireland and had been on her way to Liverpool from New York.

All available tugs and trawlers were sent to the scene including Queenstown’s motorless RNLI lifeboat James Stevens No. 20 which was towed to the scene by one of the tugs. They were able to help those who had been fortunate enough to make it into one of the ship’s lifeboats and to pull to safety those few still alive in the water. There were 761 survivors.

A further 14 volunteers from Courtmacsherry launched their lifeboat and with no wind to sail the lifeboat they rowed the entire 12 miles, taking three-and-a-half hours to get there. They arrived to a devastating scene with no one left alive to save. So the crew set about recovering the bodies to bring home to loved ones.

In May 1940, a fleet of hundreds of pleasure boats, fishing boats and other civilian vessels gathered, at the Admiralty’s request, to take part in the evacuation of British troops from the French port of Dunkirk. 19 RNLI lifeboats were part of this historic and daring force, known as the Little Ships.

With many of the lifeboats being taken charge of by military personnel, two lifeboats from Ramsgate and Margate took part in their toughest mission yet with their own RNLI crews onboard. They packed some unfamiliar equipment onboard: steel helmets, gas masks, grass towing warp, and extra supplies of fuel and fresh drinking water. Their orders? To bring the soldiers off the beaches and into the safety of the rescue ships waiting offshore. Battling strong tides and dodging enemy fire, boats and wreckage, Ramsgate’s lifeboat crew helped to collect soldiers from the beach.

They kept going for 30 hours, even then, the work of the lifeboat didn’t stop. After a long trek back across the channel to Ramsgate, the crew were in action again, bringing injured troops ashore from other vessels.

“Our lifeboat crews had some challenging times throughout the war years, with lifeboats and lifeboat stations being damaged and sadly, the loss of life of some of our crew. For heroic lifeboat services during the war years, a total of 283 gallantry medals were awarded for outstanding bravery. This Remembrance Day, we will remember all of those who gave their today for our tomorrow.”

Funded by voluntary donations, the RNLI is the charity that saves lives at sea around the UK and Ireland. It relies on thousands of dedicated volunteers who are on-call 24/7, ready to risk their lives to save others in danger on the sea.