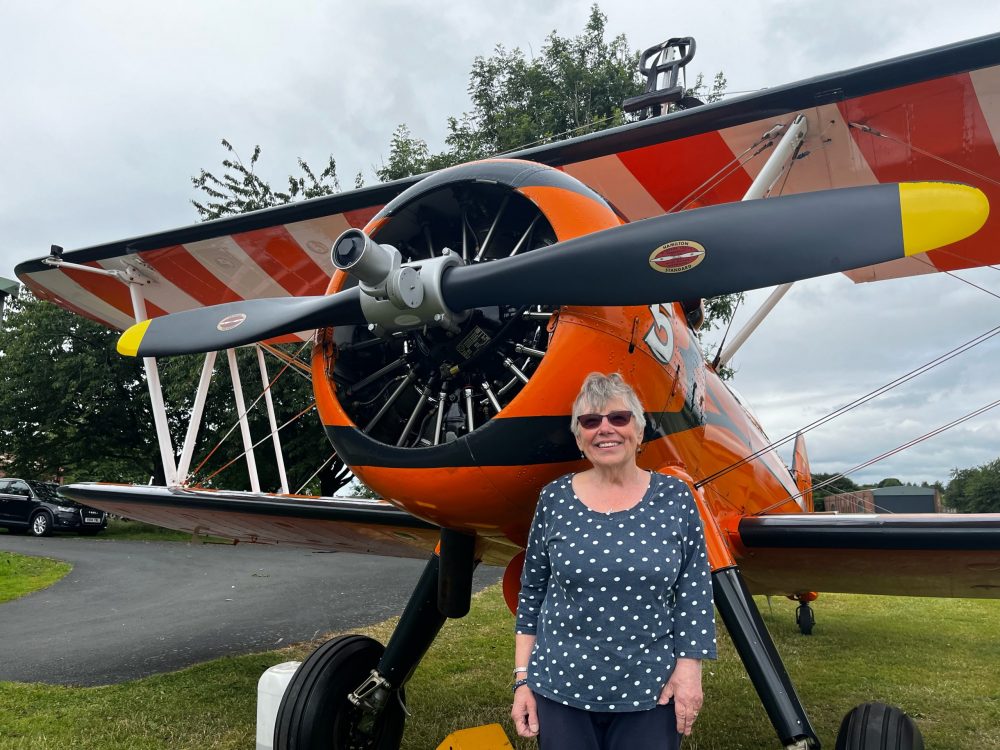 Daredevil Di, 77, from Oxfordshire, has a paralysed arm due to childhood polio. Undaunted, she’ll be strapped to a 1940s biplane, travelling at speeds of up to 140mph and reaching a height of 800 feet – that’s more than twice the height of Big Ben! She’ll be flying with AeroSuperBatics – the Guinness World Record-holding wingwalking team – on the 30th of September.

The money she raises will go to The Lewy Body Society, a cause close to Di’s heart. Her beloved husband, Tony Baker, died in 2020 from Lewy body dementia and this year would have been their diamond (60th) wedding anniversary.

Lewy body dementia is still relatively unknown, despite being the second most common type of dementia. “No one has ever heard of it,” says Di. “I want that to change so that people get diagnosed earlier. It’s very personal.”

She helps raise awareness of Lewy body dementia, as well as fundraising in various ways – supporting the charity’s work to improve diagnosis and treatment.

Di refuses to let her disability hold her back. “People often don’t even realise that I can’t use one arm because it’s never stopped me from doing anything,” she says. “My motto has always been ‘where there’s a will there’s a way’.”

Di is actively involved in the community, helping to run mother and toddler groups at St Matthew’s Church in Harwell, as well as helping at The Harwellian – the Harwell Sports and Social Club. She’s also a volunteer for DAWN, the Didcot and Wantage talking newspaper for the blind. She loves to bake, which comes in handy when making goods for charity cake stalls.

“I always loved working so it’s just natural to keep on volunteering. I’m incredibly lucky that I have always loved what I do,“ she said. “Now I can’t wait to get on that plane!”

The Gloucestershire-based Charity Learning Consortium, an eLearning organisation founded by Di’s son Martin Baker, is paying for the wing walk itself, eliminating any expenses so that all money raised goes directly to The Lewy Body Society. The wingwalk takes place at Rendcomb Airfield in Cirencester.

The Lewy Body Society is a registered charity whose mission is to fund research into Lewy body dementia and to raise awareness of the disease. Lewy body dementia is the second most common type of neurodegenerative dementia in older people after Alzheimer’s, accounting for approximately 15-20% of all people living with dementia. The charity also hopes to provide a community focus for those who live with dementia with Lewy bodies, along with their carers and families. The website provides information to help those who need to understand the disease and its impact.

The Charity Learning Consortium has more than 250 membership organisations, all using eLearning and other learning technologies to meet the skills needs of their workforce. Bringing charitable organisations together enables the Consortium to offer cost-effective eLearning to more than a million people in the third sector across the UK.