TERRENCE Higgins Trust is celebrating having raised more than £500,000 from the sale of Philip Normal’s La t-shirts inspired by Russell T Davies’ hit Channel 4 drama It’s A Sin set during the darkest days of the AIDS epidemic.

Queer artist Philip Normal – who is living with HIV – and the charity’s CEO Ian Green were today joined at Tower Bridge in London by some of those who have bought the iconic shirt.

The residents of the Pink Palace in the series say ‘La!’ to show their love for one another. Nathaniel Curtis – who plays Ash in It’s A Sin – also shared a photo of himself in his La t-shirt.

The money is being used to fund a new charity campaign featuring Philip and 12 others living with HIV to challenge the stigma still surrounding the virus by celebrating their achievements since diagnosis. It will also help the charity to provide counselling and develop training for workplaces to be HIV inclusive.

The artist and Labour councillor had to work day and night to fulfil orders of so many t-shirts through prolific online sales as well as from his shop in London’s Brixton Village.

“I couldn’t be more proud of the fact that one of the many great legacies of this show has been to raise so much money for Terrence Higgins Trust. I would like to pay tribute to wonderful Philip Normal for making the most of the moment that It’s A Sin created and thank everyone who has bought a t-shirt to support efforts to tackle the stigma still surrounding HIV.” 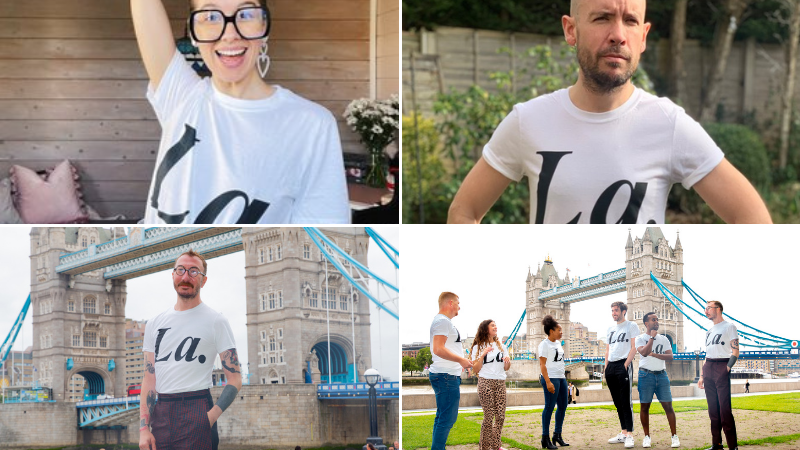 “This is just beyond my wildest dreams – I thought I’d only sell a couple of t-shirts! I’m so grateful to the cast and crew of It’s A Sin for creating this moment for us to talk about HIV in the UK, and I want to thank everyone who has bought a t-shirt and helped us raise such a phenomenal amount of money for the Terrence Higgins Trust and their vital work to get us to no new HIV cases by 2030.”

“Congratulations to Philip Normal for hitting this amazing target. Everyone at Terrence Higgins Trust is so grateful to each and every person who has stepped up and bought a shirt to support our work. The money is helping to fund a new nationwide campaign to tackle HIV stigma because although much has changed since the days of It’s A Sin, sadly the stigma around HIV is still all too present.”