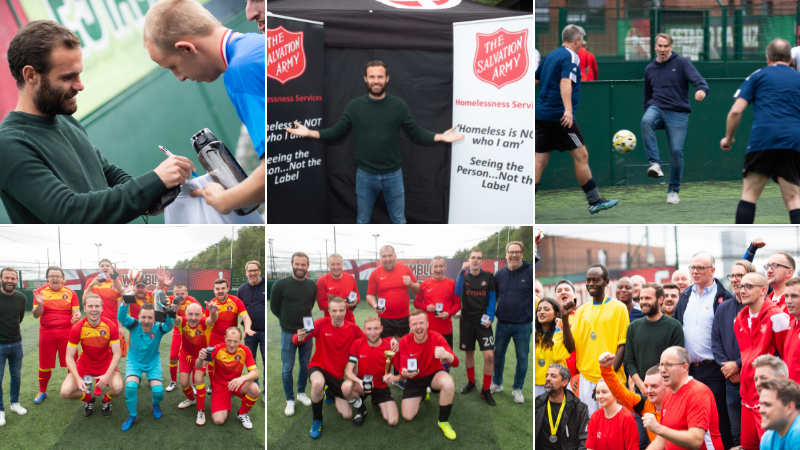 The five-a-side Partnership Trophy tournament held at Goals in Manchester brought together 15 teams from across UK Salvation Army Lifehouses (supported accommodation for people who are homeless) and homelessness services, with the aim to celebrate their achievements on and off the pitch.

Paul, who was capped 21 times by England and is now a pundit on Sky Sports, spoke movingly about his experiences with addiction and his career and played in a couple of the matches.

In another surprise for players, Spanish midfielder Juan Mata, who co-founded Common Goal, which calls on professional footballers to donate one per cent of their salary to football charities around the globe, also came to cheer on the teams.

Juan and Paul presented trophies to the winning teams Wallace of Campsie House from Glasgow and medals to the runners up Swan Lodge, Sunderland, The Orchard in Bradford and Pickfords.

Paul Merson, who has spoken candidly about his gambling addiction in his book Hooked, said:

“It was a great competition with the players showing real team spirit.

“Many of the players have been or will be still be going through a tough time, so I wish them all the best for the future. I know from my own experience that having people you can turn to is a huge help. The staff and the volunteers at The Salvation Army are doing a wonderful job in supporting them and bringing everyone together for this tournament is a great example of that.”

Juan Mata attended the event as a guest of Partnership Trophy sponsors the Guardiola Sala Foundation, a humanitarian charity set up by Manchester City manager Pep Guardiola and his family, which also donated items to the players and supported travelling expenses to enable teams to attend from across the UK.

“It has been wonderful to support The Partnership Trophy again this year and to witness how sport brings people together.”

“It was a great experience and I enjoyed seeing what The Salvation Army do, and witnessing the power of football to make people happy.”

“What an exciting day of football with the players giving it their all. It was a great opportunity to bring together our service users, staff and volunteers who have all shown resilience during what has been a challenging 18 months. Paul Merson said a day like this brings people together. Addiction wants you to be alone but when you’re around other people it helps – that’s what today is all about.

“The Partnership Trophy is part of a holistic approach which helps residents with their recovery and mental health. It plays a key role in helping them move on from the causes of homelessness, such as addiction, poor mental health or trauma.

“Our thanks go to Paul and Juan Mata for supporting the players and The Salvation Army today, as well as our sponsors, the players and staff team that contributed towards a great day.”

Jordan, a resident at Bramwell House in Blackburn, said:

“I’m a football fan. Today has been great playing in a team together. I want to help support people myself when I can. The Salvation Army has made me feel I’m not on my own through my situation.”