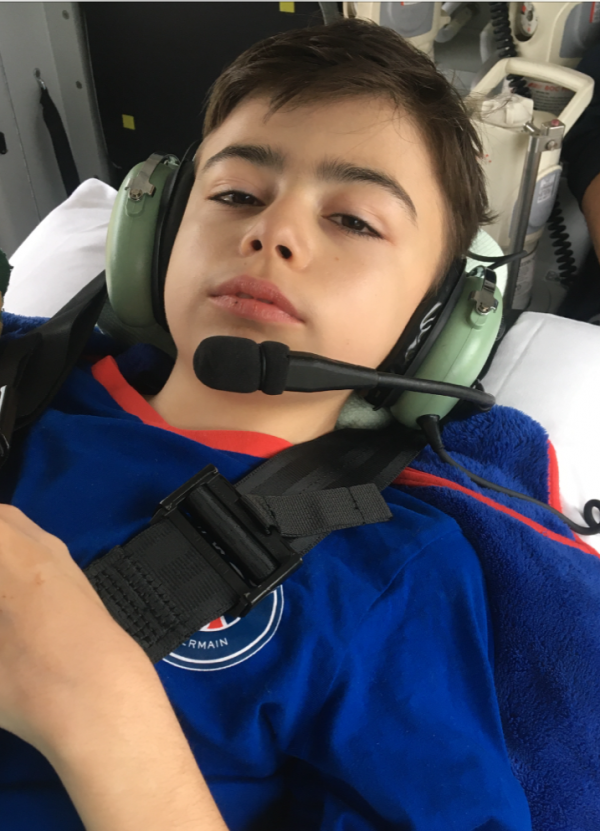 An account of how the Children’s Air Ambulance flew a Norfolk boy with a potentially life-threatening heart condition- twice – at the height of the pandemic is the focus of the national charity’s summer fundraising campaign.

On both occasions, Harry Younge, 11 at the time, from the Norfolk village, Wiggenhall St Germans – could have gone into cardiac arrest or had an arrhythmia during the transfer between Queen Elizabeth Hospital, Kings Lynn and Great Ormond Street Hospital, London – so doctors decided it was safer for him to make the journey by air as his heart wasn’t stable.

In a letter being sent to 16,000 addresses across the UK, Harry’s mum Nina explains how her son got the treatment he needed as quickly as possible, along with Harry’s personal account of his Children’s Air Ambulance journey. 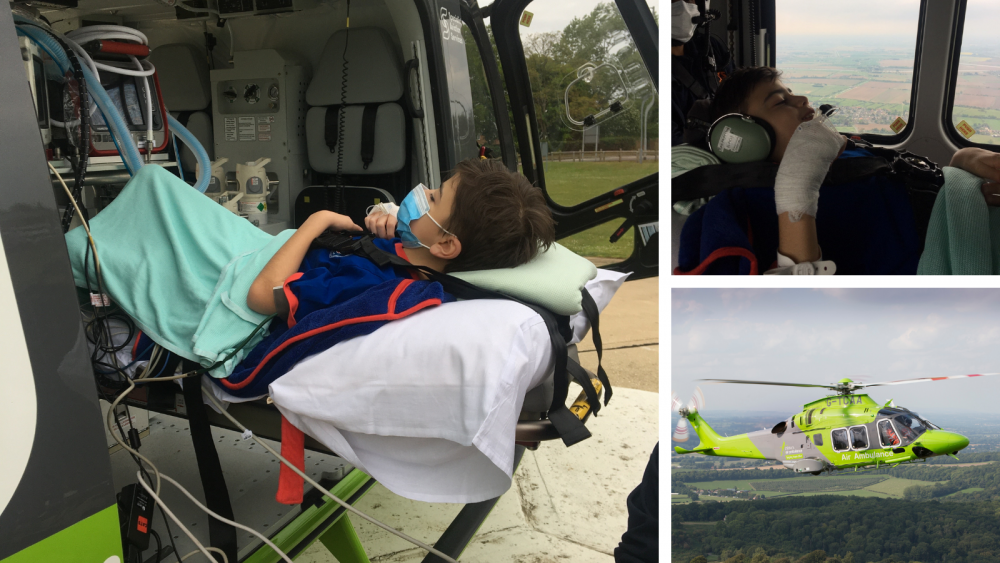 The Children’s Air Ambulance was mobilised from its base in Oxford to pick up a specialist paediatric retrieval team from London-based Children’s Acute Transport Service (CATS), fly them to King’s Lynn to prepare Harry for the flight and then accompany him on the helicopter back to London.

It took just 39 and 40 minutes to transfer Harry from King’s Lynn to Regents Park in London, where a land ambulance was waiting to take him to hospital. This is compared to a road journey of 102 miles which would take approximately two hours 20 minutes depending on traffic conditions at the time.

As there is an allocated parent seat on the helicopter, she was able to travel with her son on both flights.

“I knew he was in safe hands, but I was worried that he would have these arrhythmias, the defibrillator implanted in him would shock or he would go into cardiac arrest in the air. It was so nerve-wracking, I kept thinking hurry up and get us to London. He had been prepped so he could be quickly put to sleep and externally defibrillated if necessary. I was thinking please don’t let that happen, no parent wants to see their child being defibrillated especially not whilst up in the air.”

“His team had said he wasn’t stable enough for him to be moved by land ambulance. He was in the helicopter because his situation could have been life-threatening. Despite the fact he was getting to Great Ormond Street Hospital as quickly as possible with a team of highly skilled people it was still a very traumatic situation to be in and I was terrified.”

But thankfully, since the two transfers on 3 May and 2 June, Harry (now 13) has had a heart transplant and is back at home.

“Since the operation, he’s been thriving – putting on weight, has warm hands and feet and his finger and toenails are pink again. I hadn’t realised how sick he looked before the operation.”

“Harry can’t believe the difference either and keeps running up and down the stairs at home because he can do it now without getting out of breath. He also panicked the first time he noticed his pulse as he hadn’t felt it so strong before now. It was much slower before transplant, “says Nina.

Harry was nine years old when he collapsed after a family holiday. It was discovered that he had a heart murmur and an echocardiogram showed he had Hypertrophic Cardio Myopathy. For two and a half years he was regularly seen at Great Ormond Street Hospital where his condition was monitored.

He was conscious both times he was on the Children’s Air Ambulance and having experienced being a patient on the helicopter he is now sharing his personal experience in the charity’s campaign.

“I was really afraid when I knew I was going to have to go in the Children’s Air Ambulance but everyone told me I would be safe and that I would get to Great Ormond Street Hospital much quicker, which was better for me.”

“I had some ear defenders with a microphone and the pilot and the CATS team talked to me and told me I would be ok. It wasn’t as bad as I thought. I think I liked it better than my mum! When we got to London lots of people were in the park watching the helicopter land. I said I felt like a celebrity, there were so many people there. It was just a shame I was in my pyjamas!”

Having benefitted from the service provided by the Children’s Air Ambulance Nina is keen to promote the vital work it does.

“How can it be that such a vital service is operated by a charity and has no Government funding? I think it is such an important charity and I would urge people to support it. We all think that these things happen to someone else, you don’t imagine your child needing to be airlifted to hospital, but when suddenly you are in that situation, and time is of the utmost importance, you quickly realise how important it is that we have the Children’s Air Ambulance. We will forever be grateful to them,” she says.