On World Prematurity Day, today, Tommy’s charity is teaming up with Burnley captain Ben Mee to raise awareness and improve support for the thousands of parents like him whose babies are born too soon.

60,000 babies are born prematurely (before 37 weeks of pregnancy) each year in the UK, leaving them vulnerable to serious problems outside the womb. Premature birth is the leading cause of death, illness and disability in babies.

Although specialist care can predict and sometimes prevent premature birth, new Tommy’s research found around three-quarters (74%) of parents didn’t know they were at risk before their baby was born early. This lack of awareness puts more stress on families at an already difficult time, as they only learn about the dangers of premature birth while personally going through it.

The research also revealed that one in three parents of premature babies experienced anxiety, depression or PTSD. Two-thirds (65%) had high-stress levels, while two-fifths (41%) struggled with low mood. Previous studies have found 10x higher risks of postnatal depression among parents of premature babies, with hospital records showing that a third of mums and almost two-fifths of dads were diagnosed with the condition after their babies were born too soon. 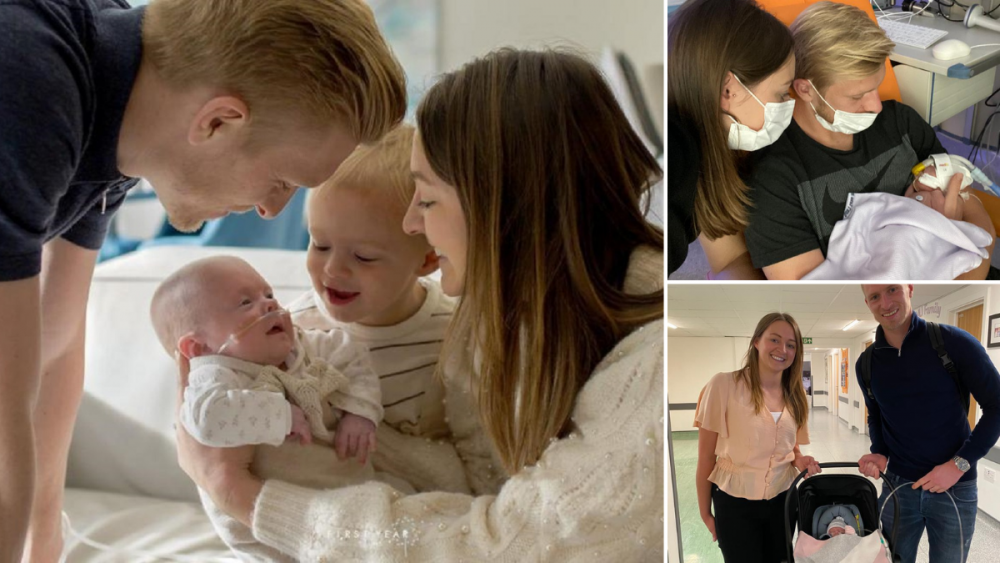 Most (56%) parents told Tommy’s they felt guilty, or like they had failed (54%) after their babies were born early. Around three-quarters (73%) said that other people didn’t understand what they were going through, and half (53%) didn’t even have the information they needed to understand what was happening themselves.

Premier League footballer Ben Mee has teamed up with Tommy’s to raise awareness and help other parents of premature babies after his daughter Olive arrived extremely prematurely last May. The Burnley captain’s wife Sarah went into labour at around 24 weeks, and their little girl weighed just 1lb 2oz when she was born two days later, needing blood transfusions and a ventilator to breathe.

“We had to wait five hours to see her, which felt like forever, and because of Covid restrictions in hospitals, we could only visit one at a time. Sarah got so emotional she collapsed, which was tough because I wanted to look after her as well as Olive. Seeing how tiny she was – all the wires, tubes, beeping monitors – was overwhelming and scary. I felt so daunted, just sitting by the incubator, not knowing what to say or do. Holding her for the first time was nerve-wracking, but the care team reassured me she was sturdier than she looked.”

After nearly two months of specialist care from St Mary’s Hospital in Manchester, which hosts Tommy’s specialist Research Centre and clinics, Olive spent three months at their local hospital in Wythenshawe. Ben and Sarah finally brought Olive home to meet her now three-year-old brother Jaxon in September, the day before her due date, and the family started 2021 with good news from doctors that she no longer needed to use oxygen tubes.

“It was a journey, one step forward and two back, good days and bad days. It’s difficult to mentally process everything you go through when your baby is born too soon, which is why I’m so passionate about campaigning with Tommy’s to help other families. If we can predict more premature births, hopefully, we can prevent them, or at least give families the support they so desperately need. We searched for positive stories of premature birth and struggled to find anything except scary statistics, so now we want to be that source of hope for someone else.”

As well as being the largest UK charity funding medical research into preventing premature birth and other pregnancy problems, Tommy’s works to turn this evidence into practical information for new and expectant parents, which is freely available on its website and new ‘My Prem Baby’ support app.

“Pregnancy and parenting should be an exciting journey, but when babies are born too soon, it often presents unique challenges that mean families need some expert guidance. We need to raise awareness and improve understanding of premature birth so that people aren’t learning about it while going through it and struggling to cope with so much at once. Premature birth is often unexpected, but it shouldn’t be; with the right care, we can not only predict it but prevent it.”

“Parents who know they’re at risk of premature birth need information and advice for the journey ahead, and those who don’t get that chance to prepare may need extra help. As well as the practical challenges of having a baby who needs special care, families often need support to cope emotionally with the anxieties and uncertainties of giving birth early. Our new app puts everything in parents’ pockets to help them feel informed, supported and in control at every stage of their premature birth journey.”

To find out more, please visit: www.tommys.org/prematurity or download Tommy’s free ‘My Prem Baby’ app from Apple and Android stores.