THE pair took part in the charity’s ‘Ride for Rockinghorse’ challenge and completed the 250km route over nine weeks.

The Ride for Rockinghorse challenge was launched in March this year and offered supporters a chance to use the cycling skills they had developed during lockdown to help raise funds to support local children.

Abi Hollands and her 11yr old son Cian, from Eastbourne, have a history of supporting Rockinghorse after taking part in several fundraising challenges in support of the charity. Abi has completed the Thames Bridge Challenge, done a skydive and organised a charity disco. And Cian has even done a sponsored silence to help raise money!

Abi’s explained why the charity was so close to the family’s heart:

“Our youngest son Evan was born prematurely and had a collapsed lung so was transferred to the Trevor Mann Baby Unit (TMBU). They treated him there for five days before he came back to Hastings. We wanted to fundraise for Rockinghorse because they saved his life. Evan’s five now and has a real zest for life, but this just wouldn’t have been possible without the care he received.”

Abi and Cian decided to sign up for Ride for Rockinghorse during the lockdown in April. Abi has Lupus, so she had to shield for much of the last year, but cycling was the exercise that had the most benefit once she could get out. Abi’s husband Nick gave her a bike last year, so the challenge was a good excuse to get out and use it.

Ride for Rockinghorse offered participants a range of distances to complete, from the 1400km Lands’ End to John O’Groats challenge to the more family-friendly 50km Brighton to Chichester route.

Abi and Cian chose the 250km distance but weren’t sure if they were going to make it:

“Because the main symptoms of my Lupus are fatigue, severe headaches and joint pain, sometimes cycling would be difficult. Some days we only managed 5km, others we got to 18km, but it all added up!”

And Cian enjoyed the challenge too:

“I really like cycling, and because I have ADHD and Tourette’s syndrome, it really helps if I do lots of exercise. Mum sometimes held me back, but she caught up eventually!”

In total, it took them just over nine weeks to complete the distance, using lots of different routes around their home. But the finish came a little unexpectedly. 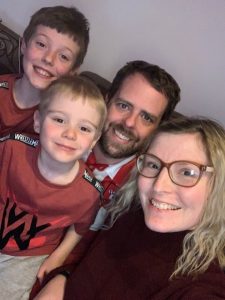 “We came home from a long ride on 30 June, and when I looked at my tracker, I realised we only had another 3km to do, so we went back out and did another 6km!”

But Abi and Cian didn’t do the whole thing alone, Nick, younger brother Evan and their dog Trevor, named after the Trevor Mann Baby Unit, were their support crew back at home, cheering them on keeping their spirits up for each cycle.

In total, Abi and Cian raised just under £300, which will go towards funding a wide range of equipment and services to help sick children.

“We really want to help anything that that Rockinghorse can do for the Royal Alexandra Children’s Hospital and, of course, the TMBU. But we also know that there are children in other places, like Chalkhill Mental Health Unit in Haywards Heath, who also really need support. We want to do whatever we can to help.”

Lucy Pond, Challenge Fundraising Manager at Rockinghorse, was really grateful for the hard work that Abi and Cian put into their cycle:

“This challenge has been a really popular one, probably as cycling was one of the exercises that was easy to do during the lockdown. So far, we have raised a total of £5,300, and it’s thanks to the wonderful support of people like Abi and Cian that we have reached this amazing amount.”

If you would like to take part in a fundraising challenge, take a look at the Rockinghorse website at www.rockinghorse.org.uk to find out what the charity has coming up over the next few months.