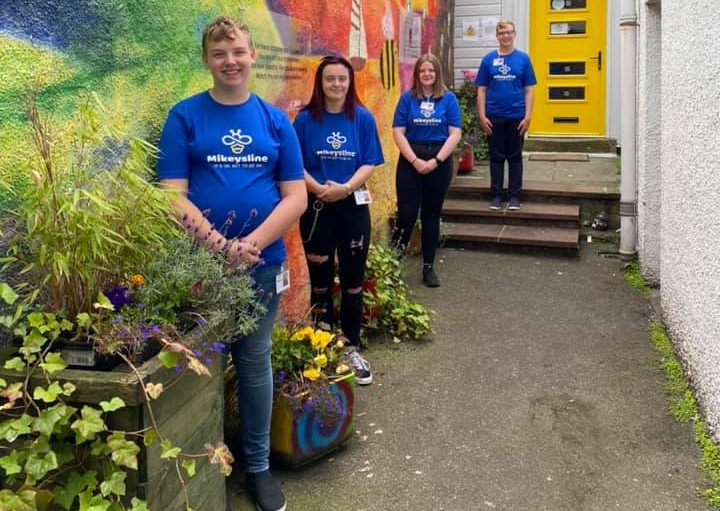 YOUNG people are being empowered to spread the word about positive mental health and suicide prevention by a charity in the north of Scotland this Children’s Mental Health Week (February 7-13).

Since starting its youth champion scheme last year, Mikeysline has recruited 70 young people across the region and has been working in 26 schools to spread the word about mental health awareness, resources and support on offer. The scheme was also celebrated at the Scottish Youth Parliament annual conference in 2021.

Youth champions help fundraise and promote awareness of Mikeysline and its support services to classmates and the local community – as well as developing messaging for the charity that will appeal to their peers.

“Every youth champion is really passionate about breaking down the stigma surrounding mental health and suicide prevention.

“Having youth champions in every school in the Highlands and Moray is so important. We have been able to spread the word about Mikeysline around Nairn through our activities – and it would be amazing to see that happening in even more towns across the area.

“If anyone out there is passionate about mental health, I would really encourage them to get involved with Mikeysline to help make a difference. Being a youth champion is a once-in-a-lifetime experience, and it’s incredibly rewarding.”

From setting up mental health noticeboards in schools to liaising with local businesses about stocking resources, fundraising at community events to engaging with a younger audience on TikTok, everything the youth champions do raises awareness for the charity and the vital services it provides.

“Our youth champions are doing incredible work in schools and communities across the Highlands and Moray, and we’re so proud of their efforts. They’re making a huge difference in spreading the word about the services Mikeysline offers to those experiencing issues with mental health, emotional distress and suicide – ensuring young people get access to the information they need.

“In the last couple of years, we have seen the number of young people using our services rise considerably, often related to the pandemic. We are currently providing support to twice as many 13–35-year-olds than any other age, and the vast majority of individuals are experiencing some form of anxiety.

“It’s incredibly important, then, to make that connection at a young age – and break down the barriers and stigma that otherwise may leave a mental health issue untreated for many years. It’s important for people of all ages to know that it’s ok not to be ok and that there are many resources and people out there that can help, including Mikeysline.”

Since 2015, Mikeysline has offered confidential, non-judgemental support to people of all ages with mental health issues or in emotional distress in the Highlands and Moray via a text line service at 07786 207755, as well as via live chat, Twitter and Messenger. The charity also offers face-to-face support from three Hives across the area – at its Inverness headquarters; at Tesco in Tain; and at Am Bothan Community Café by Skiach, Evanton.