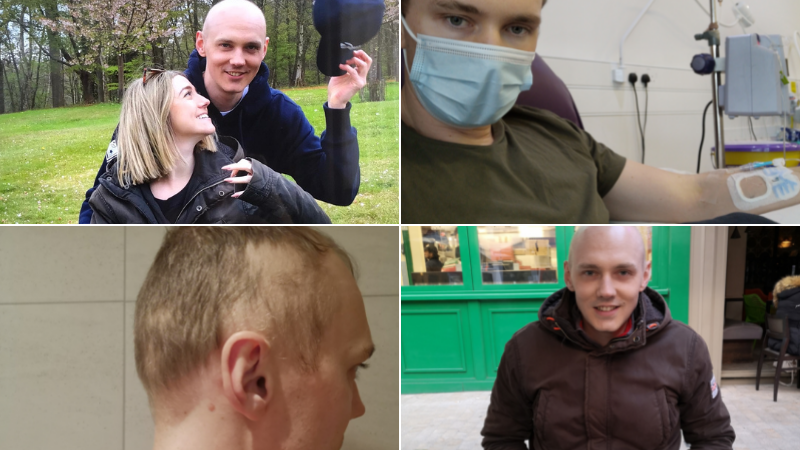 A cancer survivor is set to run the Brighton Marathon to raise money for the team who cared for him and to encourage young men to talk about testicular cancer.

Troy Randall, from Bromley in South East London, will take on his first marathon in support of Guy’s Cancer Charity, after being treated at the Cancer Centre at Guy’s in 2021.

After noticing a lump in November 2020, Troy saw his GP and was referred for an ultrasound. Doctors found that Troy had a tumour on his testicle, which they initially believed to be non-cancerous. After undergoing an operation at his local hospital to remove it in January 2021, a biopsy found that the tumour was an aggressive form of cancer.

Though the cancerous tumour had been removed, Troy was referred to the Cancer Centre at Guy’s to undergo a course of chemotherapy to reduce the chances of the cancer returning.

“I was lucky in some regards because they caught the cancer early. This meant I only had to undergo one cycle of chemo over 21 days. It could have been a very different story if I’d not seen a doctor when I first spotted the lump.”

Despite feeling mentally strong enough to cope with the chemotherapy, it took a toll on his body almost straight away. Troy said:

“After the first course, I thought I was alright, but as the day went on, I started feeling quite sick. Once I got in the car to leave the Cancer Centre, I blacked out and my parents said my eyes had rolled back as though I was having a seizure.

“I was taken by ambulance to A&E where I stayed until later that night. I was told this sometimes happens to people due to a reaction to the first dose of chemotherapy. When I came in for my next doses, the team managed me carefully with different drugs and support to ensure it didn’t happen again.”

As the sickness continued throughout Troy’s treatment he found it difficult to eat and as a result, he lost a lot of weight. He said:

“It was a really rough time and I was glad when the 21 days were over. My hair began to fall out after I’d finished the course which was a reminder of what I’d been through which was quite hard to deal with. I didn’t start eating properly again until a few weeks after I’d finished and it took a few months before I started to feel myself again.”

Troy is now cancer-free but will go for check-ups as a patient of Guy’s for the next five years. Now getting his life back to normal, Troy is looking forward to his wedding to fiancé Sophie in July this year.

To show his gratitude for the care he received, Troy will be joined by Sophie and his brother Shane to take on the Brighton Marathon on 10 April. He said:

“Despite the gruelling treatment, I don’t have one complaint. All the staff were so great. The nurses were kind and extremely attentive throughout the chemotherapy, especially as I had such a bad reaction when I had my first dose.”

Troy, who works as an environmental engineering consultant, is also using the opportunity to raise awareness of testicular cancer and encouraging men to check themselves regularly.

“The key thing is to not be embarrassed to go to the doctor and get yourself checked if you do find something you’re worried about.

Troy is also keen for people to talk openly about testicular cancer. He said:

“Since I was treated and have been open about it, friends of mine have told me that they never used to check themselves, but now they do, so it’s great to be able to do something to tackle the stigma attached to testicular cancer.”

To donate to Troy’s fundraiser, please visit his JustGiving page.

According to nhs.uk, the early signs of testicular cancer are easy to spot. Look out for one or more of the following:

If you find a lump or swelling or have any of the above signs, it’s important to get it checked out by a doctor.