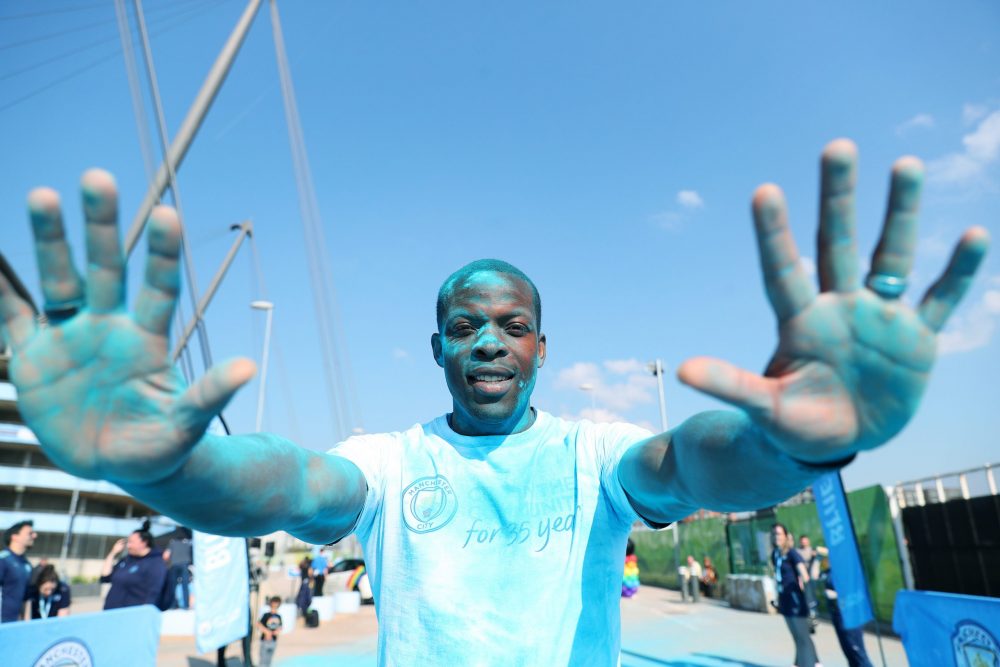 OVER 800 Manchester City fans took to the Etihad Campus over the weekend to show their support for the Club’s official charity.

City in the Community (CITC) fundraisers completed the 2022 Blue Run – a 2.5km or 5km route around the Etihad Stadium and City Football Academy, all whilst being covered in blue paint.

Tens of thousands of pounds have been raised, with every penny going towards CITC’s mental health programme, City Thrive, which is delivered in partnership with the NHS.

Former Manchester City player and current CITC Trustee, Nedum Onuoha, signalled the start of the run. Commenting on the day, he said:

“It’s been incredible to see so many supporters taking part in the Blue Run today; the energy has been electric, and everyone has done an incredible job fundraising for City in the Community.

“This is the first time we’ve been able to host the event since 2019, and in that time everyone’s lives have changed. I’ve been so impressed with how the Club’s charity has responded to the COVID-19 pandemic, specifically in support of people’s mental health, and today is going to help ensure that work can continue.

“On behalf of everyone from CITC, I’d like to thank all runners for their support.”

Five-year-old Sonny from Didsbury took part, raising over £1,000. Commenting after the run, he said:

“I wanted to run today because I love City and I really wanted to help the charity.

“I’ve had loads of fun and really enjoyed being at the stadium covered in paint. Thank you to everyone for your donations!”

Stewart Jones, from Bolton, took part in the event with his National Highways team. Speaking at the finish line, he said:

“It’s great fun today! We do lots of work in Manchester, so we wanted to put something back into the community and this is a brilliant charity to get involved with.

“We’re big on mental health, and we know how supportive City in the Community are in that area, so are thrilled to be involved. It’s just fantastic!”

Hundreds of Manchester City fans from across the world have also taken part in Blue Runs from home.

City Thrive harnesses the power of football to help provide support for thousands of people aged up to 25.

In 2021, the programme was expanded via a partnership with the NHS. The partnership includes: