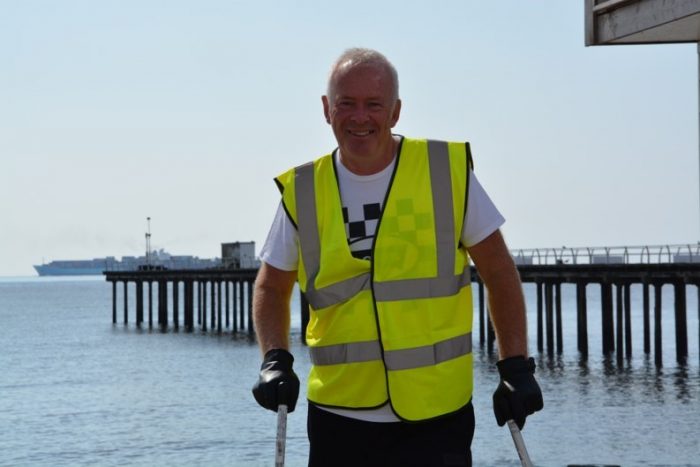 An Ipswich man who lives with multiple sclerosis is to take on an epic personal challenge of walking 12 miles (19km) along Felixstowe seafront.

Andy Blacker has always been positive about what he can achieve, despite the condition slowly chipping away at his physical strength. He was diagnosed with it in 1994, just a short time after becoming a police officer in Ipswich.

Nonetheless, Andy served the town for 22 years and now he is looking to support East Anglia’s Children’s Hospices (EACH) and Suffolk Help in Multiple Sclerosis, the latter of which he is chair, after a year in which charities have seen severe disruption to fundraising.

“I was inspired by the late, great Captain Sir Tom Moore,” said Andy. “I originally thought about ‘hobbling’ over the Orwell Bridge, but after speaking to a few different people I decided Felixstowe seafront would be the perfect location. I’ve set a target of £4,000 and I’m already over halfway there, so I’d like to say a big thank you to everyone who has supported me so far.”

Andy has to have a splint on his right foot to avoid tripping and two walking sticks for balance. He has been training in Ipswich’s Landseer Road, managing two miles in a single walk at a pace of a mile an hour, and has been given donations and encouragement by passers-by, including lorry and bus drivers.

In Felixstowe, he plans to walk four miles a day on 28, 29 and 30 May, and there will be a bucket collection at the pier.

“Community-minded supporters such as Andy are vital to making sure EACH can continue caring for children and young people with life-threatening conditions and supporting their families. Andy is such a pleasure to work with and his challenge is inspiring. He’s going above and beyond, and his efforts couldn’t be more appreciated.”

To show your support for Andy and make a donation visit https://uk.virginmoneygiving.com/AndrewBlacker2.