Inspirational runners take to the streets for London Marathon 2021 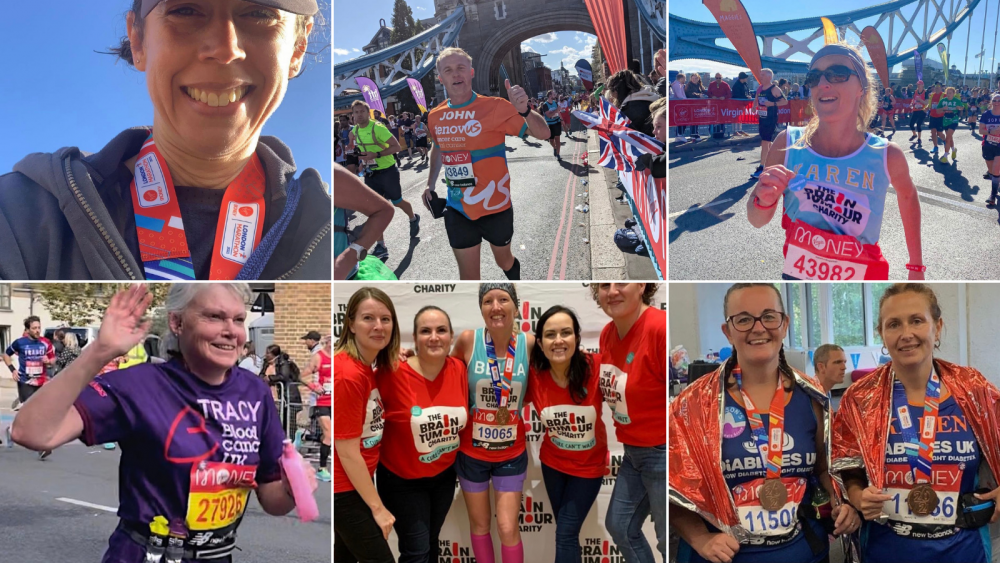 THOUSANDS of people united on the streets of the capital over 26.2 miles to finish the 2021 London Marathon on Sunday 3 October – exactly 889 days after the event last saw its ribbon of head-bobbing humanity wind round the Greenwich-to-Westminster course.

In a fitting and uplifting celebration of the event’s #WeRunTogether campaign, 35,300 people had crossed the Finish Line on The Mall by 18:30 on Sunday, as thousands more across the globe joined the party by completing their marathon challenge virtually during a 24-hour window – making the 41st edition a truly memorable occasion.

After last year’s elite only-race around St James’s Park, the return of a mass field of club runners, celebrities and charity fundraisers to the London Marathon’s traditional route was both a joy and a huge relief for Event Director Hugh Brasher and his team, whose tireless aim has been to pull humanity together, bring joy back to the streets of the capital, and once again give charities a chance to raise much-needed funds.

“We’ve really missed the togetherness after being more divided than ever,” said Brasher. “We are bringing people together one step at a time, both here today and globally.

“Our core value is #WeRunTogether and it has been a hugely complex challenge to do that, with so many scenarios considered. The amazing team strives extremely hard, day by day, to get it right.”

It was Brasher himself who predicted this could be the most competitive marathon in history, and it proved so as the elite fields delivered stunning performances to fit the occasion – with five women going under two hours 19 minutes for the first time ever, and three men finishing in under 2:05.

Kenya took the honours in the women’s race for the sixth consecutive time, as Joyciline Jepkosgei deposed her compatriot, the hat-trick-chasing defending champion and world record holder, Brigid Kosgei, while Sisay Lemma handed Ethiopia its second win in successive years by taking the coveted men’s crown.

The powerful Jepkosgei came agonisingly close to the London Marathon course and women-only world record in 2:17:43, while Lemma led home the men in 2:04:01, a time only bettered on this course by four men.

Meanwhile, there was a record-breaking Swiss double in the elite wheelchair races as Marcel Hug and Manuela Schär both set new course records, and Charlotte Purdue qualified for the 2022 World Championships by winning the British women’s elite race in 2:23:26, becoming the third-quickest British female in history in the process.

Leeds doctor Philip Sesemann provided the shock of the day as he celebrated his 29th birthday by taking the British men’s title on his marathon debut, placing seventh in the elite race overall, just behind last year’s champion Shura Kitata.

Before today’s elites came tomorrow’s, as thousands of young athletes from across the country battled for honours in the Virgin Money Giving Mini London Marathon, held over the final 2.6K of the course from Temple Place to The Mall.

Among the winners was Illias Zghoundi, who followed in the tracks of his idol and David Weir by taking the boys under-17 wheelchair crown, and Northern Ireland’s Nick Griggs, who overcame a case of Covid three weeks ago to win the boys under-17 title: “I had an unbelievable race considering,” said the understated Tyrone runner afterwards.

It was an unbelievable day for many others too, not least former England cricket captain Andrew Strauss, who ran in memory of his late wife Ruth, saying afterwards: “It’s just an amazing event, and a special thing to have run together.”

It was a theme echoed by many finishers, including former elite women’s winner and today’s women’s race starter Liz McColgan, who said: “It’s a great honour to do it today, it’s bringing life back to the city.”

Perhaps ever-present Chris Finill best captured the mood of the day as he completed his 40th race in 3:10:15: “It’s great to have it back,” he said. “The sun has come out and the mood of London is lifted.”