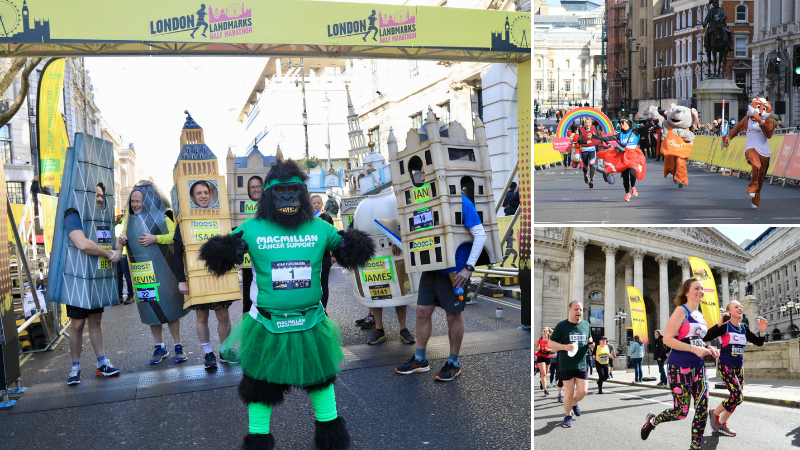 THIS week, close to 12,000 runners took to the streets of the capital wearing the colours of their chosen charity for the London Landmarks Half Marathon 2022.

London Landmarks Half Marathon is unlike any other race in the UK, taking place on closed roads through the City of London and Westminster, taking in all of London’s iconic landmarks and celebrating London’s grand, quirky and hidden heritage. Runners are encouraged to embrace the theme each year with yesterday seeing famous faces, two Guinness World Record attempts, and a whole host of fancy dress characters run the course.

The 100% not for profit event, organised by baby charity Tommy’s to raise funds for the charity and many other good causes, had raised £5.8 million as of Friday with much more fundraising yet to come for over 300 charities.

“What an amazing day! It’s such a special event, helping to raise awareness the LLHM and the importance of fundraising for charity. It fills me with such pride to see people from all walks of life come together each year to raise money for causes close to their hearts. In a world full of conflict and austerity at the moment, it’s heartwarming to see so much love and compassion. I’m delighted that since the inaugural race in 2018 over £26 million pounds has been raised for many wonderful causes, with every penny going back to supporting the amazing work of Tommy’s and its charity partners.”

McFly drummer and former Strictly winner, Harry Judd who joined the LLHM for the first time, running on behalf of Tommy’s said:

“It was amazing. Honestly, I had so much fun. Great crowds, great weather – a perfectly organised event with loads of great charities being supported today and loads of money raised, and hopefully loads of PB’s smashed. All in all, it was brilliant!”

Joining Harry amongst the 11,787 charity runner’s taking part were a raft of other famous faces, all running to raise the profile and vital funds for their chosen charities.

In the full quirky spirit of LLHM 2022, two special runners attempted to break Guinness World Records at today’s event. Alan Harris, ran in memory of his parents for Macmillan dressed as a Gorilla, whilst Elizabeth Johnston took to the course in a full quidditch kit. After successfully completing the race, both attempts are currently being verified by Guinness World Records.

Before the first runner’s reached the finish line, eight cuddly characters competed in the LLHM Mascot Dash, a 100M sprint past Horse Guards Parade to the finish line at Whitehall. In the close-run race, it was Vinny the Fox who took the ribbon and the cup for their charity League Against Cruel Sport, pitting Lucy Air Ambulance for Children in second place.

LLHM 2023 also saw the return of celebrated Chelsea Pensioners and Pearly Kings and Queens to the finish line to welcome back the runners. The much loved Chelsea Pensioners were absent from the LLHM2021 when it returned after the COVID pandemic in August last year in order to keep them safe and well.

Pre-registration has opened for the London Landmarks Half Marathon 2023 at: https://llhm.co.uk/pre-register-half.