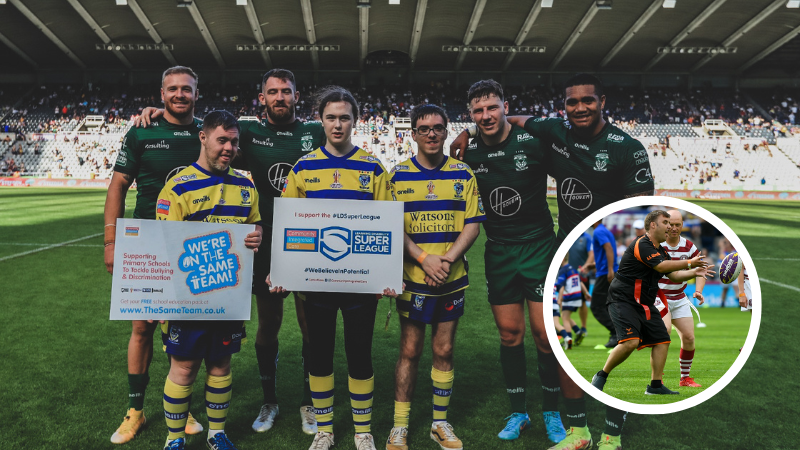 Across both days, a record crowd of 62,154 fans in attendance witnessed learning disability rugby league players from 16 Betfred Super League and Championship Clubs have the opportunity to take to the hallowed turf of Newcastle United’s stadium and play for the teams they support.

Super League and the Rugby Football League (RFL) partnered with Community Integrated Care in 2019 to create this world’s first, ground-breaking, non-competitive, and adapted form of rugby league for people with learning disabilities and autism, which launched at Anfield Stadium.

Playing in the halftime slot of headline fixtures, players from teams from across the country were cheered and celebrated by supporters from around the iconic ground, as each took their moment to shine as Super League stars. Sky Sports Presenter, and founding Ambassador, Brian Carney, spoke fondly about the programme live on air, encouraging fans across the rugby league to get behind and celebrate the initiative. Fans could also take home a matchday programme as a memento of the day, which included a special segment dedicated to showcasing the LDSL’s wider impact beyond the field in rugby league communities.

Messages of support from Super League players and legends, coaches, celebrities, fans, and families flooded social media and Sky Sports’ coverage, showing how delighted the rugby league community were, to see the sport return to Magic Weekend after a break due to the Covid-19 pandemic.

“It was a surreal experience. Getting to walk out in front of thousands of fans to play the sport I love was everything I could have dreamed of, but to score a try, was the icing on the cake. It was an unbelievable moment.”

“This Magic Weekend’s Learning Disability Super League showcase event was without a doubt one of the best ever examples of social inclusion we’ve ever seen in professional sport, at the highest level.

“I was privileged to be surrounded by each team and the players, moments before they took their first steps onto the pitch – and I’ve never experienced anything like it. You could sense the nervous anticipation and the collective excitement in their voices as they sang their team’s songs. They were ready to take their moment. That is something I will remember forever.

“Our partnership with the RFL and Super League is changing lives. We’re breaking down barriers, and with the support and commitment of our partners, we’re able to build each year by providing unforgettable opportunities for people who access care and support and specialist training year-round to all participating clubs, as well as directly investing in the development of the sport.”