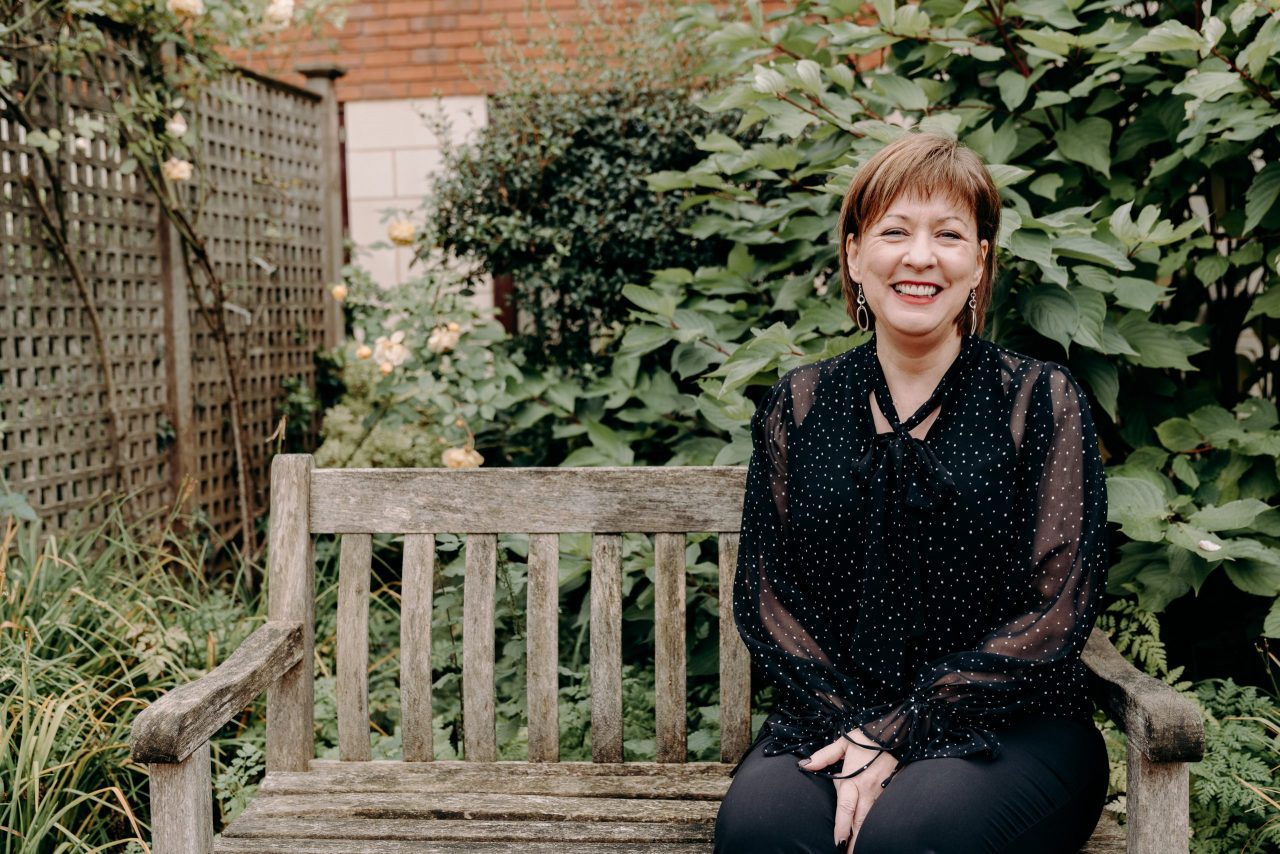 ALTHOUGH Chief Executives are well versed in leading their people through uncertainty, nothing could have prepared them for the onslaught of COVID-19, which tested leadership abilities like never before. One such leader is Barbara-Anne Walker, the Chief Executive at Chesterfield’s Ashgate Hospicecare.

Barbara-Anne was quick to identify the potential threat that COVID posed, not only to the health and wellbeing of the vulnerable patients in the hospice’s care but also to the charity’s finances which rely heavily on the goodwill of its local community.

In early 2020, Barbara-Anne had already set the wheels in motion to update and implement comprehensive continuity plans, which set out how the organisation would continue to deliver its services during a crisis. On reflection, this quick-thinking ensured the continuity of the charity’s care and services, which as the pandemic progressed would see Ashgate Hospicecare play a crucial role in the COVID-19 response.

“Those first few months when COVID hit were really hard going as we navigated our way through a rapidly changing and unpredictable environment. Aside from the practical concerns which come from a large and disparate workforce, my biggest worry was keeping people safe and looking after their wellbeing.

“Suddenly, we were managing people under considerable strain, whether that was juggling work with homeschooling, supporting vulnerable family members or being cut off from their usual support networks.

“I immediately began to look for ways that I could support our staff and volunteers, and that is why we implemented a programme of wellbeing support early on.

“There is no getting away from the stress and pressure that people are working under, and that is why it is imperative that support is available as and when it is needed. At Ashgate, that support can take many different forms from confidential helplines and online support groups to the regular team get-togethers.”

More than just a ‘tick-box’ exercise, the term wellbeing is an intrinsic part of Ashgate’s culture, something that Barbara-Anne prioritised since her appointment in December 2017. Indeed, nurturing staff and wellbeing is common practice at the charity, with the organisation referring to its cohesive approach as ‘One Ashgate’.

“One of the most important parts of the ‘One Ashgate’ approach is that staff and volunteers understand the integral part they play in the bigger picture and helping Ashgate to achieve its objectives. This has been particularly important during the pandemic as we have had to adapt the way we work, with staff and volunteers retraining to support in unfamiliar roles.

“Wellbeing is also about looking after people’s mental health, managing overall morale and encouraging greater productivity. This has been further enhanced by adaptations to our policies and procedures, which have allowed for greater flexibility, an increase in paid carers leave and topping up the wages of those furloughed.

“That’s the real beauty of effective leadership, it’s about acknowledging the person as an individual, for who they are and not just for what they can do for you.”

From the beginning of the pandemic, Ashgate Hospicecare opened its doors to end-of-life COVID patients, initially dedicating a separate wing on its 21-bedded inpatient unit but then increasing this to two wings when demand doubled during the second wave.

Demand for its care and services had never been greater, and as a result, staff were redeployed from other areas of the hospice to bolster staffing levels on the inpatient unit. The move was part of a system-wide response to support the NHS, increase admissions from the nearby Chesterfield Royal Hospital and free up hospital beds.

“I can say with confidence that Ashgate Hospicecare is playing a crucial part in the COVID-19 response in North Derbyshire, and we are caring for more COVID patients than most hospices in the UK. This is partly down to the tireless dedication and professionalism of our staff and volunteers, who have worked diligently throughout the pandemic, ensuring the safety of those we care for and the delivery of the specialist care we are known for.

“I am incredibly proud of my team and of the vital work we do in delivering end-of-life care to the people of North Derbyshire. They inspire me every day, and watching people succeed in their roles is one of the best parts of my job.

“I really like the writings and ideas of Meg Wheatley, and she is a source of inspiration in my leadership style. I particularly like how she talks about leaders who patiently and courageously insist on people’s participation to discover their potential. I truly believe that a leader should have more faith in people than they sometimes have in themselves.

“The pandemic has pushed us all out of our comfort zone at one time or another. I’ve had many moments of self-doubt, but at the end of the day, this is the job I signed up for, and I knew I just had to get on with it.”

This no-nonsense attitude has served the Glasgow born leader well, never more so than when the charity was facing severe financial hardship as a result of shops temporarily closing due to national lockdowns and its fundraising scaled back or cancelled. It looked like the charity was heading for compulsory redundancies and a reduction in its services.

However, driven by her passion for hospice care and her understanding of the difference it makes to the lives of those living with a life-limiting or terminal illness, Barbara-Anne mobilised the support of the local community and further developed relationships with key local decision-makers.

“Since the pandemic began, a total of £3m of income that we would normally budget for has been lost. The truth is that we had been suffering from chronic underfunding for years, and the virus was the straw that broke the camel’s back.

“I had been in discussions with our local NHS commissioners for many months, and after countless meetings, support from our local community and too many sleepless nights, we were finally able to come to an agreement which would safeguard vital end-of-life care and jobs.

“Delivering this news to our staff and volunteers was such a relief as I knew how heartbreaking it would be if we had to close or reduce services, as well as the anxiety they were living with whilst their jobs were unsafe. I was acutely aware that this wasn’t just about business decisions, this was about the care we provide and about people’s livelihoods.

“This is perhaps the largest hurdle I’ve ever had to overcome in my professional career, and although it can seem daunting when you’re at the centre of it, it does provide you with the opportunity to grow as an individual and as a leader.”

Why we can’t let the pandemic set back gender equality

For Barbara-Anne, the pandemic has highlighted several societal inequalities, including the threat to gender equality in the workplace. This is something she believes should be challenged by all employers, including Ashgate.

“It is true that women are bearing the brunt of childcare responsibilities, and countless reports are revealing that women are more likely to lose their jobs during this crisis. In today’s world, that just isn’t good enough, and as a female leader, I do feel a sense of responsibility to pave the way for future generations of women.

“Women are an important part of the workforce; our opinions and our voices matter. Even in my position, I have moments where I feel the need to gear myself up before walking into a meeting, but what is important to remember is that you deserve to be there.

“I am acutely aware of my vulnerabilities, but I strongly believe that there is strength in vulnerability. Just as being compassionate and building relationships are strengths, traits which can often be deemed as weaknesses or with being ‘too feminine’.

“Every day we are seeing exemplary female leaders who are leading from the front throughout this crisis. Nicola Sturgeon has shown great honesty with her decision making, as has Jacinda Ardern. Both are strong women who are fantastic role models for women of all ages.”

Barbara-Anne is also keen that Ashgate Hospicecare plays its part in creating a better world, where social prejudices are challenged and not allowed to play out.

“I think there are some really important discussions happening right now about inequalities in gender, race, class and sexuality. We must all do more to readdress the balance and commit to an inclusive workplace.

“We still have a way to go at Ashgate, but those conversations are happening right now, and I strongly believe that the more diverse voices you have in an organisation, the better the organisation will be.”

“It’s been a difficult twelve months, but I am excited for the future of Ashgate and the opportunities that lie ahead. Yes, there will be challenges along the way, but my team have proven themselves to be resilient and to always try their best.

“And when things do get tough, I hope that they know that I will be there to catch them when they fall and that our ‘one Ashgate’ approach will see us through whatever the future holds.”

Here Barbara-Anne shares her top three pieces of advice for leading through uncertainty:

1. It all starts with relationships.

It’s really important to build and nurture relationships with people throughout the organisation from the beginning.

That is why I spend time getting to know staff and volunteers on the frontline and roll up my sleeves to help where I can. In an organisation like Ashgate, everyone is interconnected in some way and how you interact with each other matters. It is how you build trust and respect in the workplace.

2. Be clear about the values that underpin the organisation.

If I am asking staff and volunteers to live the Ashgate values, then I have to do the same. That’s not to say that I don’t get it wrong, and I don’t make mistakes, I do – but it’s important to admit when I do, to be authentic and to reflect and learn every day, particularly during a period of crisis.

3. Honest and open communications are vital to ensure that everyone is motivated and engaged.

Communications have always played an integral role at Ashgate Hospicecare and never more so than since the pandemic unfolded. Suddenly the majority of our staff were working remotely from home and across a large geographical area. It was vital that staff and volunteers had access to the latest updates, understood our changing priorities and were able to carry out their roles safely.