MILLIONS of people will be uprooted over the next 20 years by storms, intensified by climate change, damaging and destroying homes. That is the warning from the international disaster relief charity ShelterBox which has been helping shelter people on the frontline of climate change for the last 20 years. It comes just ahead of the Atlantic hurricane season, which last year was the third most active on record.

ShelterBox is highlighting how the growing intensity of storms is making it more difficult to live in many parts of the world and how changing climate is driving displacement. On average, over the last five years, 11.2 million people have been newly displaced annually because of storms, according to figures by the iDMC (Internal Displacement Monitoring Centre)*. If that average is sustained over the next 20 years almost 45 million homes could be damaged or destroyed, uprooting more than 200 million people.

It’s a conservative estimate, given the Intergovernmental Panel on Climate Change’s (IPCC) stark warning that tropical storms are set to become more intense.

ShelterBox has witnessed the cost of the climate crisis first-hand, responding to extreme weather-related disasters around the world. The Cornwall-based charity provides emergency shelter and other essential items to people who have lost their homes to conflict and disaster – including those in the path of hurricanes, cyclones, and typhoons.

Head of Emergency Responses at ShelterBox, Alice Jefferson, has been deployed 16 times for the charity, including in the aftermath of Typhoon Pablo in 2012/13 and Typhoon Haiyan in 2013/14. 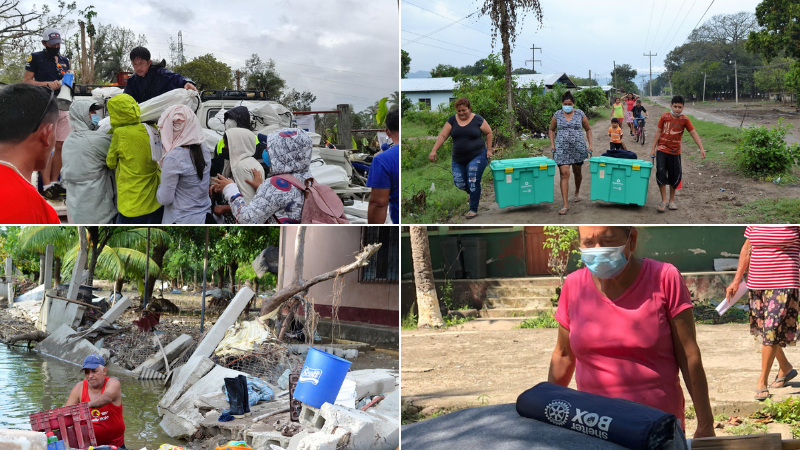 “Supporting communities who have lost homes, livelihoods or loved ones to tropical storms is sobering and a glaring reminder of the human cost of climate change.

“As well as the immense toll on our environment, we must remember the life-changing impact the shifting climate is already having on millions of people across the world.

“It’s natural for the climate crisis to seem overwhelming and while the forecast is unsettling, we know how playing a small part can make a big difference to people’s lives – and that gives us hope.

“The expectation around storm damage increasing is troubling. But, as long as we have the funds and resources to quickly scale up our responses to help the most affected communities, we will continue helping people on the frontline of climate change.”

Extreme weather happens more often in places where many live in poverty, where communities are less able to endure its effects. The recent set of reports from the IPCC’s Sixth Assessment Report concluded that the most vulnerable people are disproportionately affected by human-induced climate change. ShelterBox response teams see this regularly as they provide support to the most vulnerable people in the hardest to reach areas.

In the last ten years, ShelterBox has supported more than 400,000 people impacted by storm-related disasters, equipping them with the means to repair and rebuild their homes.

The charity’s most recent responses have included the Philippines (Typhoon Rai in Dec 2021) and Honduras (Cyclones Eta and Iota in Nov 2020).

Since it was founded at the turn of the century, ShelterBox has responded to more than 60 hurricane, typhoon, and cyclone related disasters. A third of these responses have been in the Philippines.

The Philippines is ravaged so often by intense and destructive storms that ShelterBox has adapted the way it works – pre-positioning aid in the country with a team on the ground ready to go when the next disaster strikes.

ShelterBox was one of the first charities to start supporting communities in the aftermath of Typhoon Rai. The super typhoon damaged or destroyed 1.7 million homes just as families were preparing for Christmas. ShelterBox provided emergency shelter aid to 100,000 people, many of who live in traditional homes made by hand that are not designed to withstand these storms.

Henry Thompson, a response team member for ShelterBox, was deployed in the aftermath of Typhoon Rai. He said:

“Our emergency shelter aid makes a tangible difference to people who have had their homes damaged or destroyed by ever strengthening storms.

“A tarpaulin is the difference between a family staying dry in their makeshift home or not. A watertight shelter can make a positive difference to people’s physical health and emotional well-being – as well as protecting household items.

“When electricity supply is unstable and evenings are dark, a solar light helps families spend time together. Mosquito nets help families worry less about their children’s health in areas known to have malaria or dengue fever.

“Sometimes we provide cash too. It empowers local communities. It means people, who have had their homes cruelly taken from them in a matter of moments, can hire skilled labour or buy the materials they need to rebuild their houses.”

To find out more about ShelterBox, please visit: shelterbox.org.