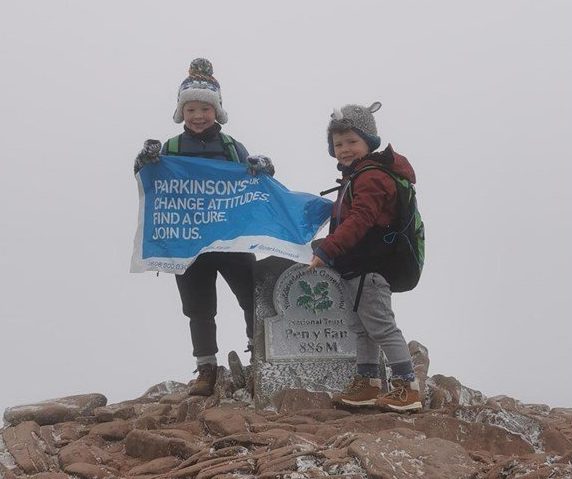 TWO primary school students from Somerset who have raised more than £1,000 for Parkinson’s UK, will now take on the highest mountain in Wales and England to raise more vital funds for research.

Lincoln, 7, and Abel Moss, 5, from Highbridge, Somerset, climbed Pen-Y-Fan in the Brecon Beacons last month. They are now gearing up to take on their next challenge of climbing Mount Snowdon. The pair are aiming to raise £1,500 for Parkinson’s UK, and have already raised a staggering £1,162.

The brothers were inspired to take on the epic challenge by their great grandmother, who was diagnosed with Parkinson’s 20 years ago. She has now developed Parkinson’s-related dementia and lives at a local nursing home. At the start of this year, both boys said they wanted to raise money to help people like their ‘great big Nanny.’

“We want to help Parkinson’s UK by climbing the mountains because we want to help our nanny. It makes me feel nervous, tired but good inside and it will be worth it.”

Parkinson’s is the fastest-growing neurological condition in the world, and currently, there is no cure. It affects around 145,000 people in the UK.

“We are so proud of the boys for doing so well with their walking and fundraising while helping to make a difference to the lives of people like their great grandmother, who has Parkinson’s. The boys got to the top of Pen-y-Fan, despite it being freezing – they were amazing. Now they are looking forward to conquering Snowdon.

“The boys are over the moon to have raised so much money for Parkinson’s UK and a cause so close to our family. It feels wonderful for us to give back to a charity that is so special to us.”

“We want to say a big thank you to Lincoln & Abel for taking on this incredible challenge for Parkinson’s UK – we wish them the very best of luck.

“With more than 40 potential symptoms, Parkinson’s can devastate lives. We’ve made huge breakthroughs in the last 50 years, but there is still no cure and current treatments are not good enough.

“Fundraisers like Lincoln and Abel help us drive forward the research we need, as well as fund vital support to help people with Parkinson’s to live well.”