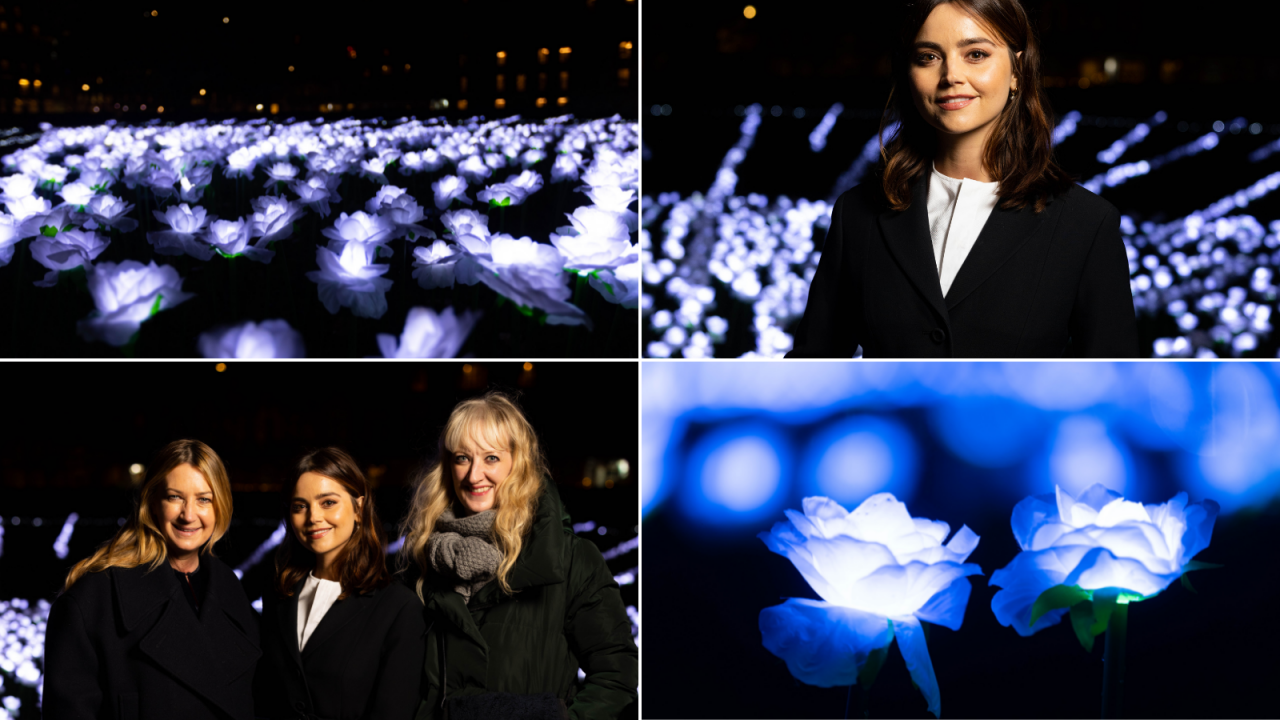 A remembrance garden filled with 25,000 illuminated white roses lit up Mayfair’s Grosvenor Square in the lead up to Christmas and raised in excess of £153,000 for The Royal Marsden Cancer Charity.

The Ever After Garden, which was first created in 2019, returned to Grosvenor Square from 1 – 23 December 2021, following a pause in 2020 due to the pandemic. Visitors were invited to dedicate a rose in memory of a lost loved one, in person or online, and every dedication was a donation to support The Royal Marsden Cancer Charity. The Charity raises money solely to support The Royal Marsden, a world-leading cancer centre.

The garden was inspired in memory of the late Production Designer and Art Director, Michael Howells, whose work included the film Ever After. After the loss of their friend, fashion creative Camilla Morton and Trustee of The Royal Marsden Cancer Charity designer Anya Hindmarch wanted to create somewhere inclusive to remember and pay tribute to those no longer with us.

The Ever After Garden in 2019 featured 10,000 roses, each dedicated and planted to support The Royal Marsden Cancer Charity, and raised nearly £94,000. The garden in 2021 had triple the original number of roses in a design that filled four sections of the square. Unlike the first garden, this time the roses were pre-planted, ready for visitors to donate and write their personal dedication. Wooden dedication markers were then placed next to each rose by the onsite team.

This year’s Ever After Garden launched on 1 December 2021 with an event attended by friends and family of Michael Howells, press, sponsors, and other special guests. Speeches were made by actress Jenna Coleman, who starred and worked with Michael Howells on the ITV hit series Victoria, Piers Townley, Grosvenor Britain & Ireland’s Director of Mayfair, Rajesh Agrawal, London’s Deputy Mayor for Business and Dr Jayne Wood, Consultant in Palliative Medicine at The Royal Marsden.

“It was wonderful to see the Ever After Garden return to Grosvenor Square and, in light of the pandemic, having this beautiful space to remember lost loved ones felt particularly poignant. The project has raised a staggering amount which will help support The Royal Marsden’s ground-breaking research, which improves the lives of cancer patients around the world.

“We are so grateful for the support of Anya Hindmarch, Camilla Morton, Grosvenor Britain & Ireland, Claridge’s and the Connaught, Culture Creative, our friends at PANCOMMUNICATION and all partners for driving forward such an amazing project.”

“I couldn’t be more thrilled that the Ever After Garden has not only been a balm for visitors to mark someone they have lost but has also raised so much money for The Royal Marsden Cancer Charity, who work so hard to save and improve the lives of cancer patients nationally and internationally through funding care and research at The Royal Marsden. Throughout December it was very moving to see streams of people at the garden dedicating roses.”

“I am proud of how the Ever After Garden grew both in roses and as a community this year. This year dedications could be written both online and in-person, and this opened the experience beyond London. Every rose reflected love being remembered. Every dedication was unique. It was a privilege to create something that meant so much to so many and helped raise money for The Royal Marsden Cancer Charity in a garden that glowed with love, kindness and hope.”

The Ever After Garden became a reality thanks to the generous support and management of Founding Partner Grosvenor Britain & Ireland and 2021’s Principal Partner Claridge’s and The Connaught, along with Event Partners Culture Creative, The Mayor’s Office ‘Let’s Do London’, Dior, Finchatton and Twenty Grosvenor Square, Mayfair, with special thanks to the Korean creative group PANCOMMUNICATION and their ‘Light Rose Garden’.