Hundreds of Santas seen running along the seafront! 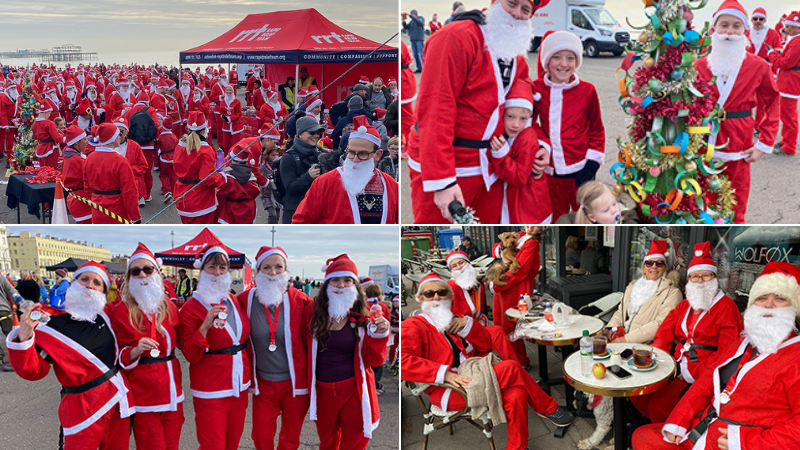 OVER 650 Santas were seen running along the seafront in Hove this weekend, all taking part in the Santa Dash in aid of Rockinghorse.

This weekend saw the welcome return of one of the highlights of the festive season in Sussex, the annual Santa Dash along Hove seafront.

This ever-popular event sees hundreds of Santas come together every December to run 5k for charity. Unfortunately, last year the event had to be cancelled due to the covid restrictions but this year, the Santas were back in force!

Over 650 people took part in the sponsored run starting on the seafront in Hove, heading West along the coast and then returning to the starting line to collect their medals.

Despite the cold weather, the intrepid Santas, big and small, brought smiles and festive cheer to passers-by and raised over £6000 for the charity with their combined efforts.

The race is organised by Commonwealth silver medallist runner, John Gladwin, and Rockinghorse Children’s Charity has been the main charity partner of the race since 2015.

“We’re delighted that the Santa Dash has returned to Brighton and Hove seafront this December. It’s wonderful to see so many people here today who have taken time out of their lives to have some fun and raise money for a great local charity. We’re so pleased to have helped Rockinghorse raise so much money.”

This money raised will go towards the charity’s Christmas appeal which aims to support a range of different mental health and wellbeing projects throughout the county, including forest school sessions, yoga and art therapy for children diagnosed with cancer, diabetes, cystic fibrosis and a range of other long-term conditions.

They are also fundraising for a new sensory garden at the Royal Alexandra Children’s Hospital in Brighton. The garden will be a relaxing, safe space for patients being treated, helping them forget about being in hospital. It will also be a space offering parents a welcome break from the hospital ward.

Amongst the runners this year was Aaron, Kieran, Lara, Reece and Skye Batson from Lewes who came along with their homemade chariot. Aaron explained that each year they create a new version of the chariot, and the smallest member of the team (this year it’s Skye) get to be pulled along while the others run!

Also running were a team from the psychology support team at the Royal Alexandra Children’s Hospital in Brighton.

They decided to run to support Rockinghorse after the charity funded a range of services for young people, including sensory equipment and self-help books for the families they support.

One of the team, Terri Prior, an Assistant Psychologist for Paediatric Oncology and Diabetes said:

“The run is our chance to show how grateful we are and give back to Rockinghorse, as we see first-hand the impact of these generous donations and hard work on children, young people and their families. We aim to raise money to continue to fund services like this into the future.”

Another group taking part was a team of best friends and parents, Michelle, Ellen, Nadia, Sue, Kathy, Jacqui and Sonny the dog from Hove, who stopped for a well-earned coffee after completing their run.

Kathy’s daughter had cystic fibrosis and received a lot of support from Rockinghorse through the years, so they were all really pleased to be able to support the charity.

Lucy Pond, the Challenge Events Manager at Rockinghorse, was delighted to be welcoming back all the runners this year:

“It’s so lovely to see all the Santas back in their rightful place this year. We really missed being here in 2020 but having all these runners support us today has been wonderful.

“Thanks to everyone who has taken part and to John Gladwin from Santa Dash Brighton for providing all the Santa Suits and medals again this year.”