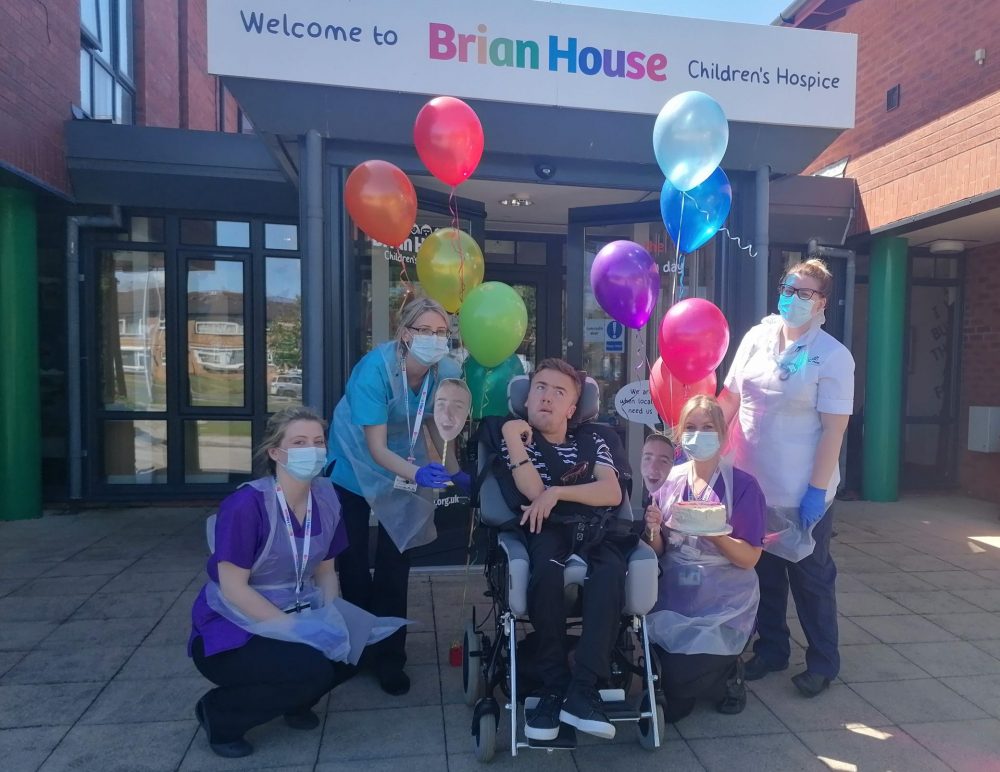 A former patient of Brian House Children’s Hospice is planning a sponsored walk to raise money in thanks for the care he received over the last 16 years.

Tom Wade, 20, has quadriplegic cerebral palsy and dystonia – a movement disorder that has left him with no mobility. It affects everything; his breathing, swallowing and his digestive system. He is also profoundly deaf.

But his understanding has not been affected, and he communicates through technology using his eyes.

He started going to Brian House when he was four, giving him the chance to enjoy new experiences while giving his mum, Jackie Sinclair, a much-needed break from his constant care needs, and the chance to spend quality time with his older brother and sister.

But now he has turned 20, it’s time for Tom to move on from the hospice, which helps to care for children with life-limiting and life-threatening conditions.

Jackie said: “It was a big thing for us to leave – Brian House has been there for Tom’s entire journey. But it’s right for us to move on. It’s an amazing facility for young people, but Tom needs to be around people his own age.

“Everyone at Brian House over the years has been incredibly supportive and so caring. It’s why Tom wants to do something himself to say thank you.”

Although he cannot move independently, Tom has a standing harness which, with great determination and effort, he is able to take a step.

He has set himself the challenge of taking 25 steps over time, to celebrate the hospice which has been open for 25 years.

“Tom really feels this is the least we could do after everything Brian House has done for him, and us as a family.

“The hospice has been such a huge part of our lives; it’s been absolutely invaluable to us. I’d say it’s been life-saving – there are times where I was just on the floor with desperation as he requires 24-hour care and constant watching. Being at Brian House is like being scooped up, that’s the only way I can describe it.”

Tom will take his steps over time, managing four to five steps in one session, and has already smashed his £200 fundraising target.

Jackie says she couldn’t be prouder.

“We are very lucky to still have Tom,” she added.

“A lot of young people with the complex health needs he has, unfortunately, don’t have as long a life as Tom. And it’s a testament to his care teams, both at home and at Brian House, and their support and advice that he is here.

“But Tom is incredibly stoic. He is so patient and so laid back. I’ve never seen him get frustrated, even though he must do at times.

“He is so strong and brave. He is an amazing young man, and everyone loves him.”

“Tom is a remarkable young man who we will miss so very dearly. His smile lights up the room and we are looking forward to hearing all about his next steps and catching up with him and Jackie when we can.

“We are so proud of him for setting himself this challenge to raise money for our hospice, and we know he has the strength and sheer determination to achieve his goal. We’re all sending a huge thank you, and wish him every bit of luck.”

You can support Tom at www.gofundme.com/f/tom-wades-thank-you-and-support-for-brian-house-c