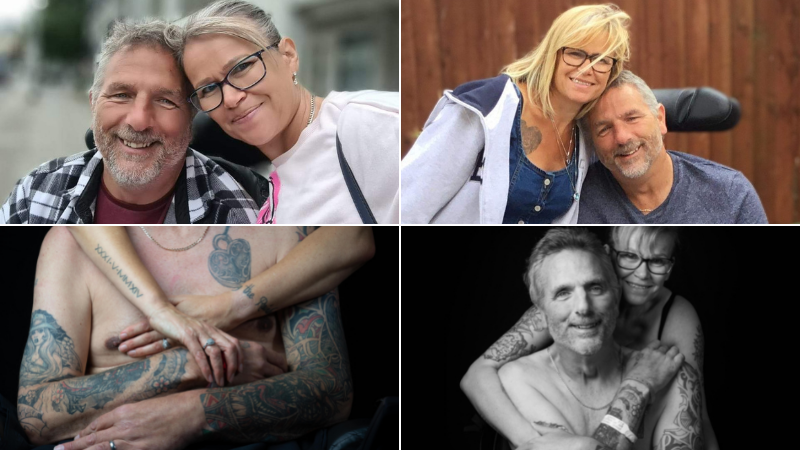 Together for 22 years and with four children between them, Nikki and Dom Manchee from Shoreham-by-Sea were inseparable. When Dom, 52, was admitted to St Barnabas House hospice in November 2021, Nikki stayed with him for two weeks. Six days before he passed away, they were able to capture their deep connection in a series of intimate photographs with the help of the hospice’s Artist in Residence.

Having had his first Multiple Sclerosis (MS) attack when he was 12 years old, Dom had lived with the condition for all his adult life. “Dom was loved by everyone that met him and he was so easy to talk to,” says Nikki. “He also brought so much joy to other people’s lives at the Sussex MS Centre in Southwick.

“From the start to finish of our relationship, we never had a dull moment. We laughed every single day and even when things progressed with Dom’s illness, humour was our way of coping with life.”

As well their positive outlook, the couple shared a love of tattoos which became the focus of the photographs taken during Dom’s stay at St Barnabas House.

When Nikki met Dom 22 years ago, she didn’t have a single tattoo. “Now I have 15!” Nikki laughs. “I got my first one on our first weekend away and over the years we’ve got lots more together, and they all have meaning. Dom had my name on his arm and I have a map of Australia where one of our sons lives as well as our wedding date on my arm. The tattoos that mean the most to both of us are the padlock he had on his chest and the key I have on my leg. He always said I had the key to his heart.”

It was when they told this story to Stevan Stratford, the hospice Artist in Residence, that the idea for the photographs came about. Dom had been admitted to St Barnabas House the week before for help with managing his pain but his stay was extended after his condition deteriorated.

“At first he was adamant that there was no way in the world he was going into the hospice,” says Nikki. “The only way he would go in was if I was allowed to stay with him. We were given a big room where the nurses would push my bed next to his so that we could hold hands at night. He loved the fact that I had breakfast in bed every morning. We would then sit in the hospice garden together, just as we had done every morning at home, even in the winter.

“Dom ended up being so happy in the hospice because for the first time in many years I was able to be his wife, not his carer. I didn’t have to lift him, wash him or feed him, the nurses did it all. Even though we knew he was very ill, we were able to share so many precious moments together and one of those most memorable times was in the hospice art room.”

Working with the Artist in Residence

At St Barnabas House there is a dedicated Artist in Residence, Stevan Stratford, who works closely with patients and family members. Creative Arts are an important part of the hospice’s care and offer different ways to process emotions and create lasting memories through creative expression.

“For Dom, who didn’t want to speak to the hospice counsellors, spending time chatting with Stevan about all our tattoos and life stories was like therapy, and for me too,” explains Nikki.  “Dom loved the idea of the photos as it was something we could do together as a couple. The whole process helped bring us even closer together and the images capture more than the tattoos, they also capture our unbreakable connection. What makes it even more important is that the photo shoot was the last thing we were able to do as a couple because the next day he really became quite confused.”

Dom’s wish was for Nikki to be on the bed with him cuddling him when he passed away, which she was, with three of his children holding his hands, on 24 November 2021 – six days after the photographs were taken. Their youngest son was unable to return from Australia due to Covid restrictions.

“All the staff were so kind to us and many of them knew my family as my mum, Sandie Betley had worked at the old St Barnabas House building for 20 years. She started, and remained a huge part of, the Hospice at Home service at St Barnabas, delivering care in people’s homes, before she sadly passed away in the hospice herself in 2006.

“I promised Dom I would care for him even after he passed away and this I did, even giving him a red rose to take on his journey with him.”

It’s over two months now since Dom passed away and Nikki says that every time she looks at the framed photograph taken at St Barnabas, she sees him smiling and it reminds her how happy Dom was at the hospice.

For people seeing the photograph for the first time, the only sign that Dom might have been so unwell were the hospital bands around his wrist. “It was very important to him to keep these on,” says Nikki, “because he wanted it to be clear that the photos were taken at the hospice, so they reflected the final chapter of his life.

“He was my world and always will be, and my tattoos are a constant reminder of our love.”