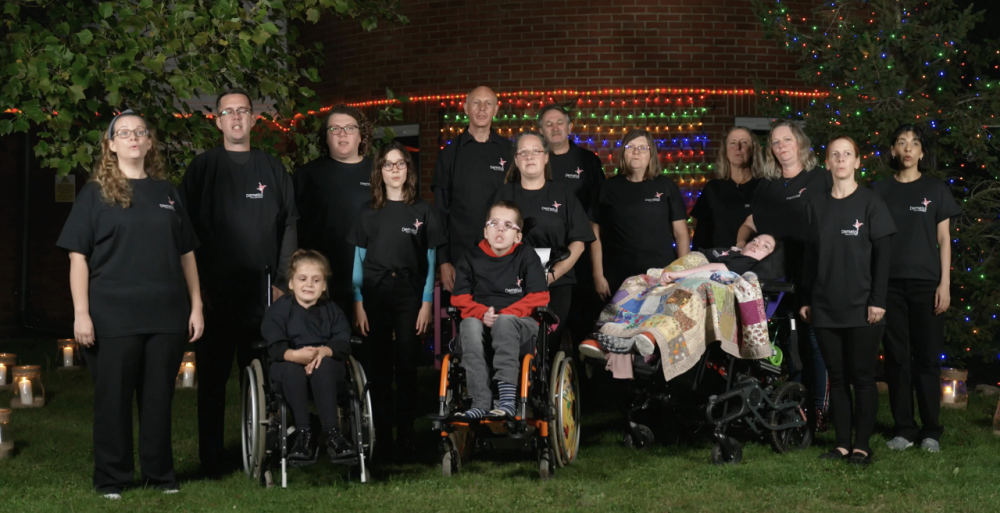 WHEN 49-year-old Sam, from Kent, first heard ‘Fall on Me’ by Andrea and Matteo Bocelli, she burst into tears. It was in the height of lockdown last year and she was attending a virtual music therapy session run by charity Demelza Hospice Care for Children, alongside her 10-year-old daughter.

Sam’s only child Lucy – a precious IVF baby – has a unique genetic condition and multiple medical issues which means she is non-verbal and uses a wheelchair.

“The words resonated so much with me. Having a child with a life-threatening condition, all that means on a day-to-day basis and with the added pressure of shielding from COVID-19, lockdown felt isolating. When we needed help, Demelza staff were there to catch us from falling.”

Sam’s emotive reaction prompted her to approach Victoria Swan, Senior Music Therapist at Demelza, asking whether there was a way everyone could sing the track as part of the music therapy sessions that had become a lifeline to Sam, Lucy and countless other families at Demelza who were confined to their homes as a result of the coronavirus pandemic.

“I thought ‘you know what?’ there might just be a way so I went away had a think, and came up with a ‘virtual’ choir.”

Victoria knew immediately who to ‘fall on’ for support: music producer James Hawkins. James is the mastermind behind the Missing People Choir who performed at Britain’s Got Talent in 2017 and more recently, produced The NHS Voices of Care Choir who sang on the number one hit single, ‘You’ll Never Walk Alone’, recorded by Captain Tom Moore and Michael Ball, singer, presenter and actor.

Victoria and James had in fact worked together previously – Victoria was part of The London Hospices Choir that reached number 1 in 2016 with the Mike and the Mechanics song, ‘The Living Years’, also produced by James – and he was more than happy to be a part of this new project.

The final track and accompanying video were a long time in the making and are both now playing a leading role in the charity’s #FestiveWishes Christmas campaign. Working with families who have a child with a serious or terminal condition is unpredictable: endless hospital appointments, therapy sessions and health crises dominate the life of a child with complex medical needs and a day can be turned upside down in the blink of an eye. But the project became a lifeline to some, who had been shut indoors for months on end. Rehearsals – all conducted online – were also opened up to Demelza staff and volunteers and the choir that recorded the video at the end of the year were very different from the choir that started the project all of those months ago.

It wasn’t until mid-October that the choir members met in person to perform together at Demelza’s hospice in Sittingbourne for the very first time, conducted by James, who made the trip, especially to Kent from his home in Surrey. After following COVID-19 protocols, rigorous lateral flow testing and maintaining social distance, the choir’s moving performance against a backdrop of twinkling Christmas lights was captured on film. Some of the nurses and children who watched the performance were visibly moved and more than one tear was shed.

It was here that Sam saw fellow soloist Demelza registered nurse Tanya Aldam for a second time, after initially meeting at a London recording studio earlier in the year.

Tanya, who is based at Demelza’s hospice in Eltham, South East London said:

“Some time ago Senior Music Therapist Victoria heard me singing to a child, so knowing that I loved to sing, asked me if I would like to join the Fall on Me choir. I’m really chuffed to be involved and it is an honour to be singing a solo part alongside Demelza mum Sam. Sam and I got to know each other during Zoom rehearsals and instantly hit it off when we met. Sam is a very special mum; she understands my role as a Registered Children’s Nurse and I understand, to some extent, what life is like for her and other Demelza parents. It’s not just the physical demands of caring for a child with complex needs but also the day to day heartbreak and how difficult and scary it can be for them.”

The resulting track and video, over a year in the making, is now a key part of Demelza’s 2021 Christmas campaign, which hopes to raise £100,000. This year, the charity is raising money to grant special #FestiveWishes for children and families who are facing the reality that this Christmas could be their last together. This includes a special gift for children and their siblings delivered by Demelza Elves, a personalised video message and letter from Santa, a visit to Santa’s grotto and a Festive Walk at Demelza’s hospice in Kent, virtual festive groups and activities for children and families in the lead up to Christmas, and above all the expert nursing care needed over the holidays and throughout 2022.

The video – produced by Red Goat Productions – is not only a reflection of the hard work and dedication of the choir but also a bittersweet reminder of the battles fought by families living with a child with a serious or terminal condition, not just through lockdown but every single day. Families who were originally involved had to pull out due to their children’s deteriorating conditions. On the day the video was recorded, Lisa, mum to Oakley from West Kent, couldn’t attend as Oakley was too unwell. Instead, the video includes a photograph of Oakley.

“Being part of the choir was great fun. We were really appreciative of the opportunity to join in and we were so disappointed not to be there on the day of the filming. But at least this way, we still have a reminder of what we can achieve with Demelza’s support.”

The final line of ‘Fall on Me’ is sung by Jack, 14 from Kent, whose mum, Phillipa also sings on the track. Jack’s complex medical condition doesn’t stop him – he loves to have the last word and, much to Jack’s delight, he had the honour of singing the last line.

”I didn’t know Jack would be singing the last line – it gave me goosebumps when I heard him. Demelza has been, and is, a lifeline to us and this project gave us something positive to do through the dark days of lockdown, connecting us to Demelza and the families we have met through their amazing support in a way we never imagined.”

To donate to Demelza’s #FestiveWishes appeal and see the spectacular Fall On Me choir in action, please visit: www.demelza.org.uk/Christmas.