Grateful father cycles 1,000-miles to give thanks to daughter’s hospital

A father has cycled almost 1,000 miles to give thanks to the team who cared for his teenage daughter when she became critically ill.

Iain Painting, from Kingston upon Thames in South West London, together with two friends, has raised thousands for Evelina London Children’s Hospital after his daughter Amelia received lifesaving treatment for meningitis and encephalitis.

“Amelia first complained of a headache and temperature. We didn’t think too much of it but gave her some Calpol before going to bed. The day afterwards she bounced up and played hockey but that afternoon again complained of a headache and had a temperature. By the evening, she still wasn’t right and as the day went on, she continued to get worse.”

Iain and his wife Mary decided to take her to the A&E department at Kingston Hospital and within what felt like minutes, staff assessed Amelia and decided she needed to be intubated. 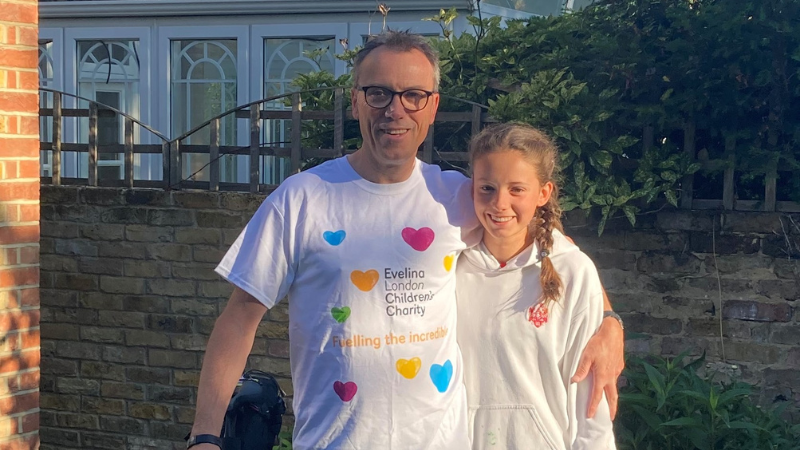 “Doctors knew almost instantly that Amelia was seriously unwell and would need to be taken to an intensive care unit.”

Once intubated, a team from the South Thames Retrieval Service (STRS) arrived to take Amelia to Evelina London Children’s Hospital’s paediatric intensive care unit (PICU). STRS are a team of children’s specialists based at the hospital, who bring intensive care equipment via a specially equipped ambulance to the sickest children and then transport them to a specialist hospital.

Once at Evelina London Children’s Hospital, it was found that she had contracted pneumococcal meningitis, a life-threatening infectious disease that causes inflammation of the layers that surround the brain and spinal cord. She also had encephalitis, which is an inflammation of the brain itself.

Amelia was put on mechanical ventilation, which took over her breathing while she couldn’t do it on her own. Doctor’s fought to save Amelia, but as each day passed, her condition deteriorated.

“On Monday morning she was admitted to PICU and by Thursday the team were so worried about her that I was asked to bring in our son Aidan to say goodbye to her.

“We began living hour by hour. If she managed to make it to the hour, we’d just look to the next. The team would talk us through everything, discuss all of the results of the tests and scans they were doing and let us know how they were hoping to save her.”

The following day the family received the news they were all hoping for. Iain said:

“On the Friday morning, in the blink of an eye, her condition began to improve. She started to respond to things around her and was beginning to move. She held my hand which was incredible. Just a few days before I thought she might never be able to do that again.”

Amelia was taken off the life support machine the next day and was moved to the High Dependency Unit (HDU). Though she still needed ongoing support, including help walking, she was able to leave the hospital the following week.

“The meningitis caused Amelia to lose the hearing in her left ear and she had a severe eye infection which needed further treatment.”

“One of the biggest things for us was the sheer numbers of different people who all pulled together to care for Amelia. While we were in hospital, the doctors and nurses were just incredible. They looked out for Mary, Aidan and me almost as much as they cared for her.

“She needed physio to help her to get back on her feet after being in PICU. Evelina London’s audiology team also fitted her with a bone conduction hearing device so she can hear again. Although we’re all still processing what happened, we have a happy ending and I know from being on the unit, not every family gets that.”

To show his appreciation for all of the teams that cared for Amelia, Iain recently finished a nine-day cycle across the length of the UK. Iain was joined by friends Simon Potts and Andrew Munton to do the near 1,000-mile challenge, from Land’s End in Cornwall to Britain’s most northerly point, John O’Groats in Scotland. 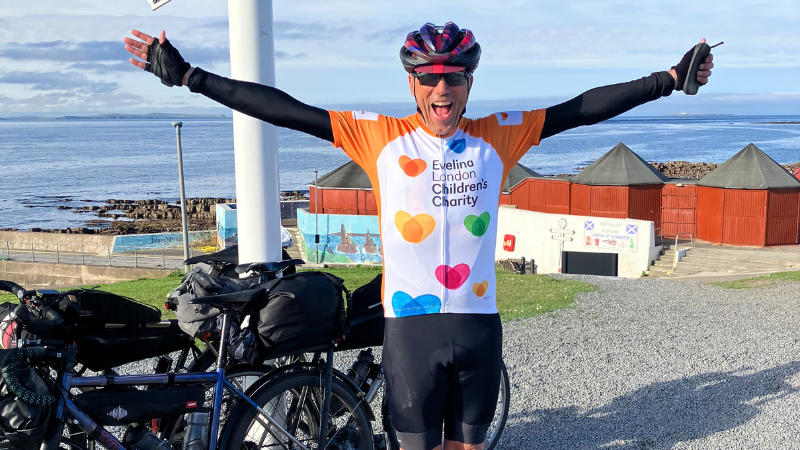 “For sad middle-aged cyclists like me, it’s one of those bucket list things I’ve wanted to do for years! When Amelia was starting to get better I was out cycling with Simon and Andrew and I suggested we give it a go.

“COVID-19 meant we had to postpone it for a couple of years, but in a way, it was helpful as it really helped to cement why I wanted to do it for Evelina London.”

Iain and his friends cycled on average 110 miles each day, carrying all their own kit along with them for the entirety of the journey. Iain said:

“It was an amazing experience. You get to see some phenomenal sights and we met some brilliant people along the way. As we were wearing our Evelina London jerseys, people would ask us about what we were doing so we got to speak to people about our story.

“I just can’t say thank you enough. Amelia had a level of care that we just didn’t know existed. Everyone we encountered was just so compassionate. We all felt like we were part of the Evelina London family and that will stay with us forever.”

“It is fantastic to see how well Amelia is recovering following her illness. To know she’s able to get back to playing the sports she loves is a testament to her determination and the support of her family.

“I’d like to wish Iain a huge thank you from myself and the rest of the team who have cared for Amelia for taking on such a huge fundraising challenge. We are exceptionally grateful.”

So far Iain and his friends have raised almost £5,000 for Evelina London Children’s Charity. To donate, please visit his JustGiving page.