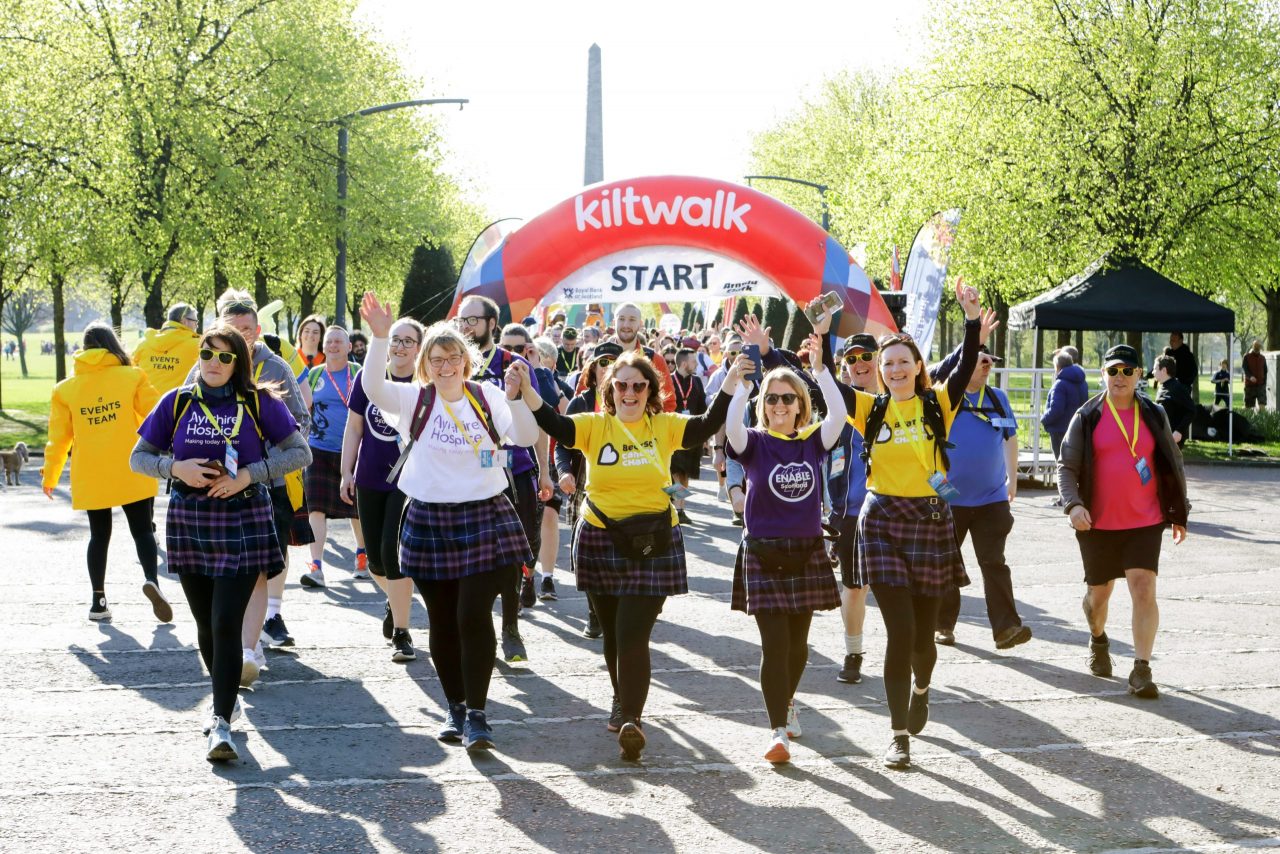 A crowd of more than 10,000 Kiltwalk Heroes mounted a tartan takeover of Glasgow over the weekend, raising a whopping £3 million for charities across Scotland.

As is Kiltwalk tradition, every £1 raised receives a generous 50% top-up from The Hunter Foundation. With Glasgow walkers raising an impressive £2 million, this total was boosted by Sir Tom Hunter to a mighty £3 million, which will be gifted to 685 Scottish charities.

Including the latest fundraising figures, Scotland’s favourite mass participation event has now raised over £32 million for 2,850 charities since April 2016, six years to the day.

“I regard the success of Kiltwalk as one of the Foundation’s greatest achievements. It was a joy to see so many of our Kiltwalk Heroes out in their tartan this morning at Glasgow Green. Their kindness means the world to me and to Scotland’s charities, and I can’t stress enough how much it’s appreciated in these toughest of times.

“After a challenging few years, Scotland’s charities benefit from every donation so Kiltwalkers should be very proud of the difference they have made today.

“This has been a flying start to Kiltwalk 2022 – well done everyone!”

This year marks the return of Kiltwalks in Glasgow, Aberdeen, Dundee and Edinburgh following the pandemic. A Virtual Kiltwalk Weekend will also be staged following the success of virtual events held during lockdown which proved a lifeline to Scotland’s charities.

Glasgow walkers began bright and early with an 8.30am start, before tackling three routes of varying difficulty.

The 23-mile Mighty Stride left from Glasgow Green at the same time as the Big Stroll, a 15-mile jaunt which kicked off in Clydebank. Later, those tackling the three-mile Wee Wander took off from Loch Lomond Shores, with the routes converging to end at the Kiltwalk Village in Balloch.

Children’s Hospices Across Scotland (CHAS) have already raised more than £1 million even before adding their Glasgow Kiltwalk fundraising from this weekend. They also boasted the largest number of walkers and hosted a charity pit stop at Clydebank while Action for Children hosted one at Vale of Leven.

“We are absolutely delighted to have been part of Scotland’s Kiltwalk and would like to say a massive thank you to every walker who took on the challenge for CHAS in our 30th anniversary year. We are blown away by the amount of people who signed up in 2022 and all the funds raised will make a huge difference to the children with life-shortening conditions and their families that we support across Scotland and to know this is topped up generously by 50% from Sir Tom Hunter is absolutely incredible.”

Jenny Copeland, founder and CEO of mental health charity Megan’s Space, which she established after her daughter Megan took her own life following years of poor mental health, said:

“Every penny donated is spent on support for young people. The traditional services are overwhelmed and the waiting list for support can be too long.

“We endeavour to provide a response and support within days of receiving an enquiry. This would not be possible without a unique fundraising platform like the Glasgow Kiltwalk or Sir Tom Hunter.”

“This has been our biggest and best Kiltwalk yet. We had 150 people taking part in Action for Children’s biggest ever Kiltwalk team, and our first-ever pit stop. The atmosphere has been fantastic, and it was incredible to welcome the thousands of people walking for good causes to our pit stop for some Action for Children hospitality.

“We are so grateful to everyone raising money for us at this amazing event. The 50% top-up for The Hunter Foundation means that we can give even more vulnerable children in Scotland the safe and happy childhood they deserve.”

Glasgow Kiltwalkers will find out during the week who the lucky winners are of two brand new cars from their Headline Sponsor.

Following Glasgow’s efforts, the next Kiltwalk event will take place in Aberdeen on May 29, then in Dundee on the 21st of August and in Edinburgh on the 18th of September. There will also be a Virtual Kiltwalk weekend from the 7th – to the 9th of October.

To sign up for the four remaining Kiltwalk events of 2022, please visit:  www.thekiltwalk.co.uk.