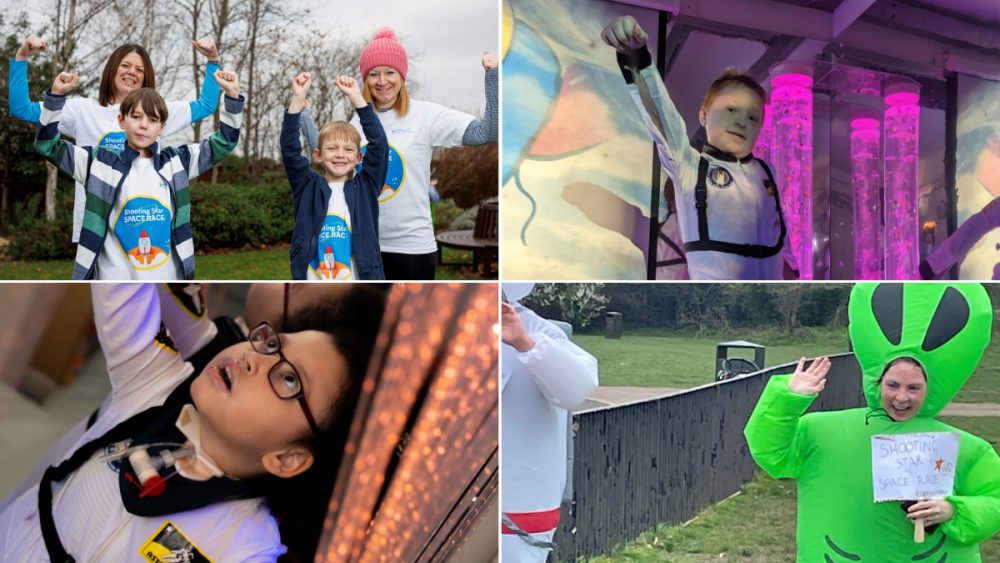 CHILDREN’S hospice charity, Shooting Star Children’s Hospices have launched their latest supersonic challenge that’s sure to be a blast this March. From the 1st of March, they are calling all budding astronauts to join them on a very special mission – the Shooting Star Space Race.

Following the out of this world success of last year’s lunar mission – covering an astronomical 46,388 miles and raising £56,000 for the charity, Team Shooting Star are hoping supporters can help their virtual rocket launch into the Solar System and take on its second adventure – this time to Mars!

They hope to recruit a stellar team to walk, run, cycle, scoot, or swim as many miles as they can throughout March to help them rocket to the red planet and raise vital funds for children with life-limiting conditions, and their families that they support.

Even at its closest point this year, Mars will still be 38.6 million miles away from Earth but don’t worry the charity have used a special space formula, so the Space Racers team of fundraisers need to collectively cover 38,600 miles in 31 days to make the mission to Mars a success. Based on the success of last year, they may even make it home again!

However you planet, this is a cosmic challenge that is fun for all ages – and as it rockets over the whole of March you can ‘space’ out your miles to work for you.

Shooting Star Children’s Hospices marvellous mission is inspired by space lover Chief Astronauts Nicholas and his friend Anais, who both have been supported by the charity for many years. Nicholas and Anais have complex conditions which require specialist care, but they certainly don’t let these conditions stop them from having fun and just love to play together when they come into the hospice.

Amy Beddows took part in last year’s Space Race in memory of her daughter Robyn, who was supported by her local children’s hospice.

“Shooting Star Children’s Hospices was an invaluable haven for us after our daughter, Robyn, became seriously ill with a rare condition called Vanishing White Matter disease. After months in hospital trying to treat the symptoms and dealing with the crushing news that we only had a few months left with our daughter, Shooting Star Children’s Hospices was a beacon of light for us. With their support, we were able to cherish the time we had together as a family and make it full rather than short.

“When Robyn passed away at just over 11 months old, we returned to Shooting Star Children’s Hospices where we were able to spend a precious few more days with her in a special cold room. It gave us and our families time to cuddle her and say goodbye.

“We will never forget the care and kindness we received from Shooting Star Children’s Hospices, so when Robyn was due to turn five in March 2021, I entered the Shooting Star Space Race, pledging to run 5km every day in March, with the last Sunday run with my husband – both in an inflatable alien and astronaut costumes. The response and generosity was very moving, and it felt special to support the charity that gave us so much, and even more special to be able to do it in memory of our beautiful daughter, Robyn.”

By joining the Space Race team, you’ll be helping ensure Shooting Star Children’s Hospices can continue to make every moment count for Nicholas, Anais and families like Robyn’s.