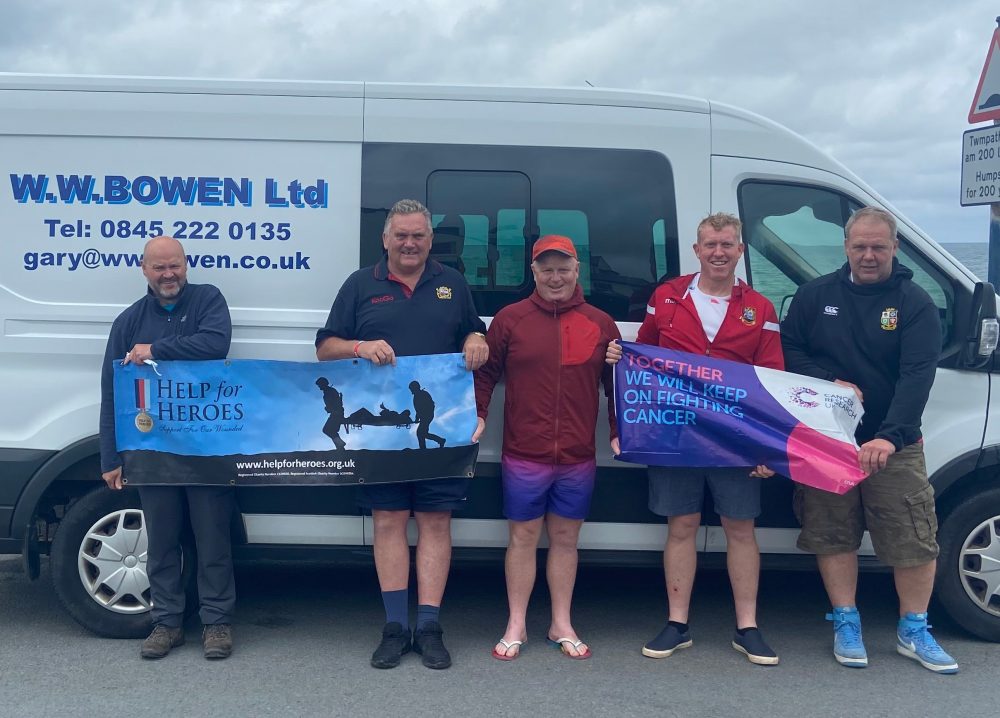 AWARD-winning fundraiser Des Lally is enjoying some well-earned time off after completing the extraordinary feat of climbing five mountains, in five countries, over three days to raise much-needed funds for Cancer Research UK and Help for Heroes.

Mortgage broker Lally, 46, from Brecon, was joined by a four-strong support team in a van as he travelled more than 1,900 miles, as well as trekking up more than three miles of mountains – much of it in the dark.

Lally, who was named the South Wales Evening Post Community Awards’ fundraiser of the year earlier in 2021, admitted it had not been the most comfortable of 72 hours.

“It was tough going, there’s no doubt about that – especially living out of a van for four days, with a lack of sleep and not eating properly. We left Brecon at 6am on the Tuesday, and by the time we got to the foot of the first mountain, it was about 2.30am the following morning – so, nearly 24 hours later. And we left straight away.

“We went up it in the dark, but because of that, we couldn’t find the path to go up it. We ended up climbing up the practically vertical face to get to the path. No denying it, there were some hairy moments where we had to sit down and grab hold of something to wait for the gusts of wind to pass.

“And coming down Carrauntoohil [in Ireland] – which was definitely the toughest of the mountains – there’s a bit called the Devil’s Ladder, and it really got to me scrambling down it, as it was wet and there was a lot of loose rock and stuff.”

“Physically, I’m fine. We were lucky as we didn’t have any injuries or anything, it was just the travelling that got to us. By the time we reached Snowdon, we had worked out we’d travelled more than 1,900 miles – and that doesn’t include the climbs.

“It was tough, but, as I’ve said previously, it’s nothing compared to what people in the Armed Forces have suffered, physically and psychologically, or what cancer sufferers deal with every day. That’s why we were doing it.”

His fundraising total currently stands at around £12,000, including Gift Aid, but he is keeping his page open until the end of August, as he has been promised further donations from people he met during his trip.

“The biggest thing we’ve taken from this is actually how beautiful the UK and Ireland is. Before setting out on this challenge, most of us hadn’t travelled very widely, and we were stunned by the scenery we saw. At one stage, in Scotland, there was a stag refusing to move in the centre of the road. It was like a stand-off, wonderful!”

A dedicated fundraiser, Lally has yet to decide what the future holds for his blistered feet and plans to take some time out.

“If I said to my partner I was now planning on doing something else, I think she’d chuck me off the nearest mountain!”

Half of the money raised by Lally will be donated to Armed Forces charity Help for Heroes, whose Area Fundraising Manager, Dean Williams, said:

“I never fail to be amazed by the dedication of some of our fundraisers, and Des is certainly at the vanguard of that cohort.

“I’d like to thank him for his efforts on behalf of everybody at Help for Heroes and those who benefit from the services and support we provide. Des deserves to take it easy for a while – perhaps he’d like to join us cycling from John O’Groats to Land’s End, later this month.”

Help for Heroes believes those who serve our country deserve support when they’re wounded. Every day, men and women have to leave their career in the Armed Forces as a result of physical or psychological wounds. The Charity helps them and their families to recover and get on with their lives. It has already supported more than 26,500 people and won’t stop until every wounded veteran gets the support they deserve.

It is not too late to donate to Des Lally’s 5 Mountains, 5 Countries, 3 Days challenge. Just visit https://uk.virginmoneygiving.com/DesLally.

For further information on Help for Heroes, or to get support, please visit: helpforheroes.org.uk.