Friends with Parkinson’s to tackle Scotland to London walk 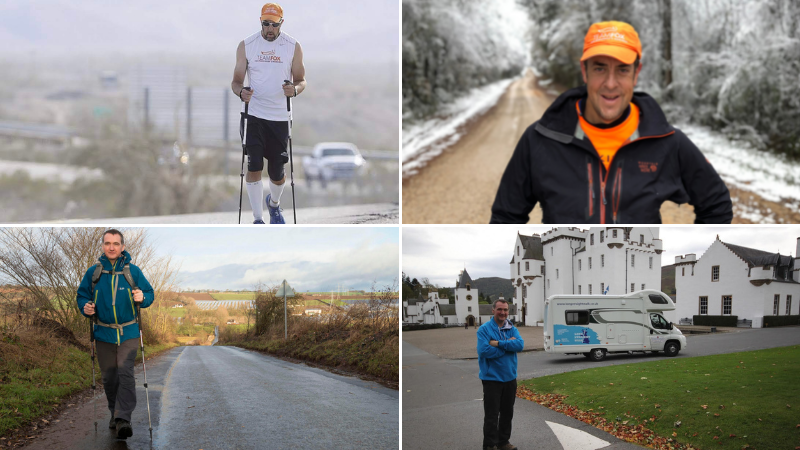 TWO friends, both living with Parkinson’s, will walk 670 miles from Scotland to London in a mission to raise vital funds for research into the condition.

Bill Bucklew, who was diagnosed with early-onset Parkinson’s at 43 years old, will set off on 14 September from John O’Groats, completing around 40 miles a day.

He will be joined by his friend John MacPhee for the Scottish leg of the walk. John, from Inverness, was also diagnosed with Parkinson’s in his 40s.

They will travel down through the Highlands to Inverness, stopping at villages along the way before making their way to Edinburgh and then crossing over into England.

The 17-day walk will finish in Hoxton Square, London, where Parkinson’s was first established as a recognised medical condition by the surgeon and researcher James Parkinson in 1817.

Not content with walking hundreds of miles, Bill will also then take on the Virgin Money London Marathon only a few days after completing the distance.

The pair hope their combined efforts will raise $1.1 million (£800,000) to be split between three charities: Parkinson’s UK, Cure Parkinson’s and The Michael J Fox Foundation, which is based in the USA.

“I went improperly diagnosed for around seven years, which has made me determined to raise awareness of the condition wherever I can. Parkinson’s is the fastest-growing neurological condition in the world, and we need to ensure that people are able to get a diagnosis and access to treatment and support as soon as possible.”

Since his diagnosis, Bill – a US citizen of Scottish descent – has completed a number of events to raise funds for Parkinson’s research, including the Ironman Triathlon, climbing Mount Kilimanjaro and numerous marathons.

“I was especially motivated to take on this challenge in honour of my father Byron, who was diagnosed with Parkinson’s only a few years after myself. He sadly passed away in 2020 following complications related to the condition.

“There is currently no cure for Parkinson’s, but by funding promising research, we can accelerate the development of better treatments for the condition.”

“I had retired from long-distance challenges, but upon hearing about Bill’s monumental walk, I was inspired to help. It will be tough, but we are both passionate about helping people with Parkinson’s on both sides of the pond to live as well as possible while working together to find a cure for the condition.”

“We are so grateful to Bill and John for taking on this incredible challenge for Parkinson’s UK, and we wish them the very best of luck with their journey. Their commitment to making sure people with Parkinson’s live the best life possible and to finding a cure, is truly inspiring.

“With more than 40 potential symptoms, Parkinson’s can devastate lives. There have been huge breakthroughs in the last 50 years, but there is still no cure, and current treatments are not good enough. We need urgent action to drive forward research that is going to transform the lives of those living with the condition worldwide.”

“Bill and John are truly inspirational individuals, not just in their determination to complete such a demanding challenge but in the way they have rallied to raise both funds and awareness of the condition. We are so grateful to them both for helping to bring us closer to finding the cure for Parkinson’s that is so desperately needed.”

“We are energized by the support of Bill Bucklew and John MacPhee as friends and Team Fox supporters in our mission to find a cure for Parkinson’s. This generous fundraising effort will benefit the Foundation’s high-impact research programs in helping us move closer to our goal of speeding a cure and breakthrough treatments for the millions of people and families living with this disease around the world.”

To support Bill and John’s fundraising and find out more about the challenge, please visit: walk4parkinsons.org/home/.